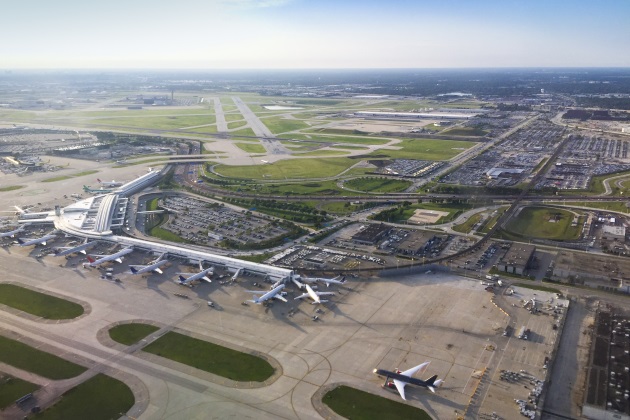 Chicago O'Hare is the largest recipient of this round of Transportation Department grants.

U.S. Transportation Secretary Elaine L. Chao has announced a major round of infrastructure funding to airports across the United States to help with much-needed rehabilitation and construction projects.

In all, 358 grants have been awarded to 327 airports around the country in 46 states and several island territories. These range from smaller regional and general aviation facilities to large hub airports like Dallas-Fort Worth International, George Bush Intercontinental, San Diego International, and Las Vegas McCarran.

The work being funded in many cases includes essential maintenance and upgrades, such as building or resurfacing taxiways and aircraft parking aprons, the building of deicing facilities, or the improvement of drainage.

In many cases, airports are working through their own master plans of upgrades and expansions, and see the federal grants as a way of funding some of the essential aspects of this.

In the case of Sarasota-Bradenton International in Florida, a taxiway will be resurfaced and a new airport firefighting building will be constructed. Meanwhile, Des Moines in Iowa will build a new runway and parking apron as part of its growth plans.

The largest single investments on the list go to Chicago O’Hare with $45 million for the construction of a new runway, Fort Lauderdale-Hollywood International with a combined $44 million to extend one runway and rehabilitate another, and $29 million to Ted Stevens Anchorage International to reconstruct its runway 15/33. At the other end of the scale, the smallest single grant goes to Delaware County Regional in Muncie, Indiana, which was awarded $28,000 to conduct an environmental study.

“This significant investment in airport improvements will fund construction and rehabilitation projects that will help maintain high levels of safety in U.S. aviation,” said Chao.

The grants are part of a $3.18 billion fund that will be invested in U.S. airports through the Airport Improvement Program (AIP).

With 3,332 airports in the United States, the grants represent a benefit to around 10% of them. And it is not just mainland America that will benefit. Airports in Hawaii, Micronesia, the Northern Mariana Islands, and Palau are all included on the list.

Shortly after the list of grants was made public, Elaine Chao was again making a statement to employees of the Department of Transportation to expect the busiest day in its history on July 4th as Americans celebrated Independence Day. Air travel would see an expected 5.3% jump, highlighting the need to keep on top of airport infrastructure projects as year-on-year demand increases.

A full list of airports entitled to grants in this round of appointments can be seen here.