Air pollution and its effect on the heart 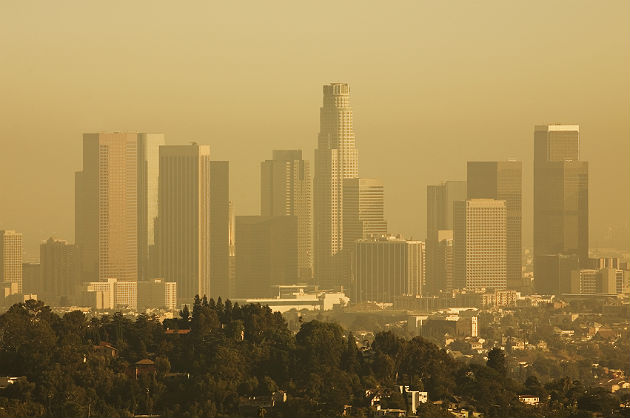 View of downtown Los Angeles on a smog-filled day.

Smog in urban areas has long been a health concern because of the problems it can cause for our lungs. As it turns out, tiny pollution particles in the air can lead to big problems for our hearts as well.

Medical researchers are particularly concerned about pollution particles smaller than 2.5 microns, which are usually related to fuel combustion. Because they are so tiny, they aren't easily screened and more readily enter the human body where they then begin to irritate the lungs and blood vessels around the heart. Data suggest that over time pollutants aggravate or increase the process of disease in the arteries.

Now, in what is believed to be the largest, most detailed study of its kind in the United States, scientists have confirmed that tiny chemical particles in the air we breathe are linked to an overall increase in risk of death.

For their research, George Thurston, ScD, a professor of population health and environmental medicine at NYU Langone Medical Center, and his colleagues evaluated data from a detailed health and diet survey conducted by the National Institutes of Health (NIH) and the American Association of Retired Persons (AARP). The NIH-AARP study involved 566,000 male and female volunteers, ages 50 to 71, from California, Florida, Louisiana, New Jersey, North Carolina, Pennsylvania and the metropolitan areas of Atlanta and Detroit.

Information about the participants was gathered from 2000-2009. The researchers calculated the death risk from exposure to particulate matter for people in each national census district by cross-referencing information about the amount and type of particulate matter from the Environmental Protection Agency's Air Quality System and other databases.

The investigators then statistically ruled out other variables impacting health and longevity including age, race or ethnicity, level of education, marital status, body size, alcohol consumption, how much participants smoked or not, and socioeconomic factors such as median neighborhood income and how many people in the neighborhood did not graduate from high school.

What the researchers didn't find was any significant difference in the effect of particulate matter exposure between different sexes or age groups or by level of education. They also didn't find that limiting the analysis to only the state of California, which has the most rigorous controls on air pollution, produced a different overall level of risk.

What they did find was the same association between particulate matter exposure and an increase in the risk of death from all nonaccidental causes and from cardiovascular disease.

According to senior study investigator and health epidemiologist Richard B. Hayes, DDS, PhD, MPH, the team will next study which components of particulate matter are most harmful and whether they come from auto exhaust, chemical plants or coal-burning power plants.

In the meantime, we can be certain that air pollution is a problem for everyone. Outdoor fine particulate matter has been identified as a global health threat, but the number of large U.S. prospective cohort studies with individual participant data remains limited, especially at lower recent exposure.

Thurston's study is particularly notable because all the data used in the analysis comes from government and independently held sources. It is especially important to continue monitoring health risks as national standards for air pollution are strengthened.