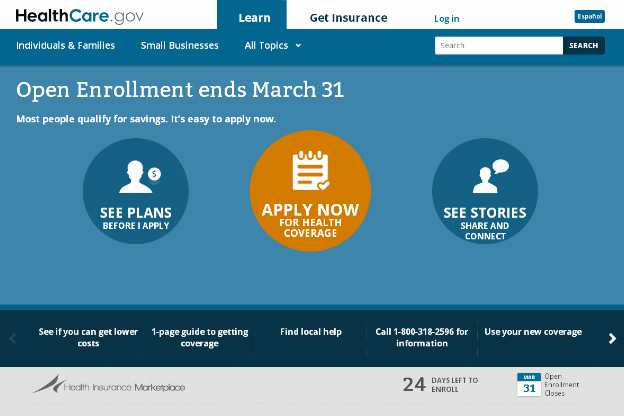 Despite the well-publicized deadline, the White House has announced that those who have started the application process on HealthCare.gov will be granted an extension to complete the process. The Christian Science Monitor recently reported that applicants will simply need to check a box indicating that they tried to sign up by the deadline to be granted the extension until mid-April.

With a flood of last-minute applications, the day started out as something of a microcosm for the often-maligned law's rollout. Early in the morning, potential applicants were greeted with messages that HealthCare.gov was down for maintenance and that heavy traffic required them to wait in a "virtual waiting room." The Department of Health and Human Services, responsible for implementing the ACA and HealthCare.gov, said regular service was restored to the site later in the morning.

In October, when the website and public exchanges went live to myriad technical problems, the Obama administration and HHS Secretary Kathleen Sebelius were widely criticized for releasing a largely inefficient and inoperable system to the public. In the months since, teams of engineers and contractors helped mostly turn the site around.

As of the final day of signups, more than 6 million people had enrolled in the exchanges, per the Obama administration. Last summer, the administration expected 7 million signups, but revised its goal down to 6 million in early 2014, following the technical issues. It remains to be seen if the totals will reach 7 million after a likely wave of last-minute signups, but statistics from the Centers for Medicare & Medicaid Services have indicated that the original projection may be reached.

The White House may yet reach its targets, but the law's potential of getting all previously uninsured Americans covered has fallen somewhat short. A Kaiser Family Foundation poll released just days before the deadline showed that 50 percent of uninsured citizens from the ages of 18-64 plan to remain uninsured and pay the penalty fee on their 2014 tax returns.

Additionally, young adult signups, desired to be 40 percent or more of the total enrollment by the administration, have represented only a quarter of the enrollees. This has prompted some fears that much higher costs may be on the way for the public exchanges in the future.

Private brokers such as eHealth have been more successful in getting young people to apply. The online service estimates 45 percent of its ACA-compliant plans have been purchased by people aged 18-34.

While the open enrollment deadline represents another stage in the Affordable Care Act's history, many battles have yet to be fought relating to the law. A challenge to the legislation's "birth control mandate" was heard by the Supreme Court just last week. The expansion of Medicaid included in the law has also remained a controversial issue in some state legislatures, and various other parts of the law are under legal review.