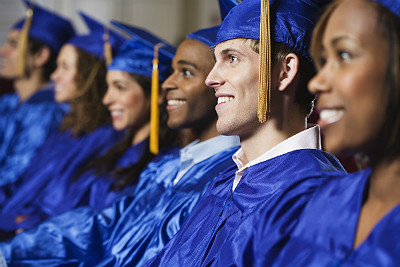 Education Secretary Arne Duncan announced the latest high school graduation rates today, with the numbers hitting 80 percent for the first time in U.S. history. Also at this week's 2014 Building a GradNation Summit in Washington, D.C., experts are projecting is a promising 90 percent national graduation rate by 2020.

The figures have been gleaned from the Education Department statistics from 2012 and are based on a specific measurement called Averaged Freshman Graduation Rate (AFGR). They show a positive picture of the nation's education scene after almost 30 years.

If the positive trends persist, then America should also have more college graduates per capita and should easily meet President Barack Obama's goal to have the highest proportion of college graduates in the world by 2020.

High school graduation is important because it will create the equal foundation for all in their future endeavors — such as higher education and their careers. The research shows the graduation gaps and the disparities between various student subgroups, which can be ethnic, economic or based on capabilities in some cases.

What is really promising here is that federal and state governments are working hand-in-hand with school districts and administrations to include graduation rates in accountability measures. Great focus is being given to increasing awareness of dropout rates and their associative problems for each individual so that dropout factories (schools with high dropout rates) can disappear from the scene.

It's going to get tougher with more people graduating and an increasing number with college degrees. The report also states that recession or otherwise, layoffs will now be determined by educational qualifications than workforce volumes.

The metric for measurement now takes into account the final four years students attend and will be a reported as part of their accountability systems in future. Administrators and school districts are equally focused on improving this data because their future funding will be closely dependent on better figures.

The 2009-10 school year saw a 78.2 percent nationwide graduation compared to 73.4 percent just five years prior. What was also heartening that graduation rates were up for all ethnic groups, so expectations are pretty high going forward.

Numerous initiatives have been undertaken at local, state and national levels to improve the graduation rate because the government has realized that without an educated populace, indigenous growth will forever be stunted.

Administrators and educators are joining hands with policymakers to build up sustainable education campaigns that will drive home the value of good education and graduation and seriously curb the dropout rate. While resources are being planned and set up to deal with the same, one has to understand the basic differences in demographics so that the solution delivery is successful.

For example, Asian-Americans showed the highest graduation rate, while the Hispanic community — which had earlier shown high dropout rates — has shown a 39 to 17 percent increase. With the dropout rate for African American students dropping from 50 to 25 percent, there are finally signs of evening out the knowledge gaps that the nation neither needs nor can afford.

Certain regions of the country fared better than others:

What the summit has revealed has hopes running high. It shows that 24 states are closing to reaching the 90 percent goal while Vermont and Wisconsin have already met this, which greater things can be expected from these districts. There are now 583 fewer dropout factories and 1 million less students attending them in the last 10 years.

The GradNation Campaign, which is the force behind the Building a GradNation Summit, is focused on influencing more young Americans to graduate on time from high schools and step onto promising college and career paths right away.

This increasingly powerful group consists of organizations and communities, individuals and administrations coming together to work for an empowered America. To do this they constantly evaluate and assess existing programs and statistics so that they can work on them to improve for a better 21st century workforce.

In a 2013 Education Week report, Larry M. Perondi, the superintendent of Oceanside, California, school district had some profound thoughts on the subject: "Every student that drops out is a capital loss ... and every one brought back is a reclaimed revenue source."

His statement rightly sums up the future of the nation — or lack of it if the populace remains uneducated and ill-equipped with the right knowledge. If dropout rates are not curbed, then American cannot hope to be the forerunner of socioeconomic or political change or even compete with emerging nations. High school graduation rates must improve to increase the pursuance of college education as well.

Interestingly, charter schools have shown a higher percentage of graduation rates, with data showing that 7-11 percent are more likely to graduate than their public school peers. But what is more pertinent here the intrinsic values that charter school students are graduating with, more focus on higher education and a positive impact on their early adulthood earnings.

This value needs to be delivered across the length and breadth of the education system. Students have to understand that while high school gradation is a must, it is not enough. They must believe their future will be brighter with higher education so they can opt for it as a preferred choice.

The combined efforts of policymakers, educators and parents can bring about these far-reaching changes.