After settling down at the Longhorn Ranch, we took a ride into the backcountry. As evening approached, we found ourselves on Torrey Creek Road looking down a valley towards the Badlands, a world of multi-colored cliffs.

As the sun began its journey into the western hills, the sky flamed with red, gold and purple light. The sun seemed to be suspended above the Wind River and the glistening waters merged with the incredible sky.

Long rays of red and gold colors intermingled with the rippling water. Each minute we saw a change of color in the clouds above; it was a gorgeous transformation. In time, the sky grew grey as the sun hid itself behind the mountain peaks.

We have many fine memories of our various visits to this land. Our first trip to Grand Teton National Park was in April 1967 when our son was just a babe. We traveled on U.S. 26 through Dubois, Wyoming, yet have no memory of it. Each time we are close we anxiously look forward to a return. This was no exception. 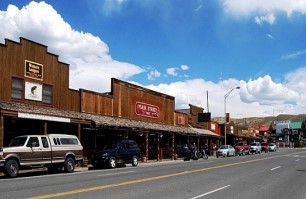 We left the Longhorn Ranch early Monday morning as the sun was already high in the sky over the Shoshone National Forest. The weather bureau was forecasting a beautiful sunny day in Jackson Hole.

Once you leave Dubois and follow the Wind River into the mountain country, the terrain uplifts into higher and higher peaks with a combination of interesting rock formations and a forest of evergreen pine and grassy meadows.

We stopped several times just to take in the beauty of the Washakie Wilderness and to take a few pictures. Once we crossed Togwotee Pass at 9,434 feet, we crossed the Continental Divide and began our downhill run through the Teton National Forest.

As we neared Moran Junction from a high point on U.S. 26, we witnessed our first view of what Diane calls "Her Beautiful Ladies." There, standing in the distance were the rocky peaks of six magnificent mountains.

We only saw them for a few minutes before they disappeared below the forward range of the national forest. A few short miles and they were once again in view as we approached the busy intersection at Moran Junction.

The Teton Range, a 40-mile rocky mountainous range was most likely the summer home of the Shoshone tribe, which called it Teewinot, meaning "many pinnacles." French voyageurs later called the high peaks "les trios tetons," or three breasts.

Grand Teton is the most impressive peak rising to an incredible rocky point of 13,770 feet, followed by Mount Owen, Teewinot, Middle Teton, South Teton and Moran Peak. Some people refer to these jagged rocky peaks as the Cathedral Range. 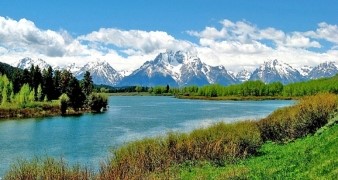 The national park is vast and uniquely beautiful land with the rugged mountains having no foothills. They were formed by a tectonic plate bowed up by a vast block of sedimentary rock deposited by an ancient sea.

One reason the Teton Range is famous is because of the great elevation above the eastern side. Unlike most mountain ranges, the east side of the Teton Range lacks foothills or lower peaks that can obscure the view.

This is due to the Teton Fault at the base of the range on the eastern side, and the range being too young to have eroded into soft hills. The east slope of the Teton Range rises sharply, from 5,000 to 7,000 feet above the valley floor. The view is most dramatic from the east, looking to the west. The Teton Range appear as high rolling hills that transition smoothly into flat pasture. 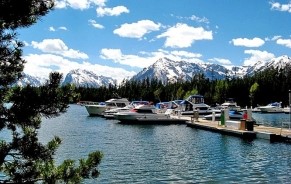 Anyone traveling through this unique mountain valley should consider visiting Oxbow Bend to catch a beautiful view of the Snake River and the Teton Range. A must-see is Willow Flats, an area with a large accumulation of wildlife.

Another beautiful place is Colter Bay and Jackson Lake. Few places in America compare to the Grand Teton Mountain area, whether you visit in the busy summer months or the more relaxed winter.

Lodging within this spectacular park requires reservations at least a year in advance. Plan ahead.

Jackson Hole and the Tetons have been the setting for a number of films, including John Wayne’s movie acting debut in "The Big Trail" in 1930 and Alan Ladd’s "Shane" in 1953.

Arriving in Jackson Hole, the town had changed immensely, as tourists crowded the streets and parks, cars, motorcycles, and RVs were to be everywhere. Moving was greatly restricted. We caught a quick lunch at the famed Cowboy Bar then headed back into the beauty of the Grand Teton National Park.

Our ride back to Dubois and the Longhorn Ranch provided an evening of viewing multiple wildlife from large bison and elk grazing in tall grass to eagles flying over the Snake River. Back on the Wind River we relaxed with a glass of wine listening to the peaceful splish-splashes of water passing over rocky surfaces. With darkness and the sounds of a wilderness night life sleep came easy.