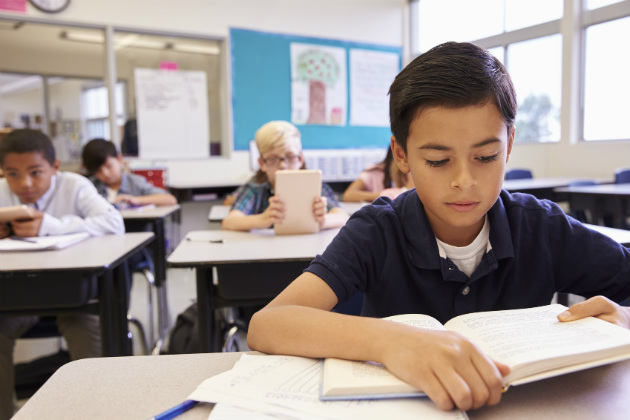 Some years ago, my husband, Dr. Neil Winebrenner, was a superintendent of a school district in suburban Chicago. He knew of all my work in gifted education, and he was prepared to meet an unusual family.

A mom and dad made an appointment to ask for his help in creating a custom school program for their very gifted son, Kurt, who was in fourth grade. They described a child who was extremely capable in almost all subject areas.

However, he was significantly disorganized in his head and often failed to turn in work he had completed and then "lost." He kept telling them that the work for which he was being held responsible was way too easy, and it was difficult for him to retain his interest in it.

They were asking for a double-promotion to sixth grade for the following year so he could begin his middle school experience early.

After a complete assessment by the school psychologist, the parents' perceptions were confirmed. He had IQ in the very superior range, along with achievement test results that were significantly ahead of grade-level expectations. His undocumented executive functioning problems had kept him from being identified as gifted at any grade level he had already completed.

A multi-year plan was developed, and the boy started the next year of school as a sixth-grader. The middle school staff also recognized his exceptional abilities and ultimately recommended that he skip 8th grade, thus allowing him to begin high school at age 12.

As anticipated, he graduated high school at age 15, and took classes at a local community college until he was ready to go to a university. His mental health stayed strong throughout these experiences.

The parents contacted came in for a follow-up meeting with the superintendent as the boy was entering high school, and told him that Kurt's two older brothers, who were just like their younger brother, had never been diagnosed as gifted, but had been identified as LD. Neither boy ever graduated from high school nor found a job that fit his interests or learning needs.

I cried when I heard that story.

Fast-forward some 30 years, and listen to a story from a webinar meeting I had with two administrators and two teachers in Alexandria, Indiana. The subject of our online meetings was how to create and implement a successful Cluster Grouping Program.

The Schoolwide Cluster Grouping Model (SCGM), as described in "The Cluster Grouping Handbook," creates cluster groups of gifted students at all grade levels, which purposefully includes students who are "atypically gifted" — highly capable in some areas but with an identifiable learning disability or with a history of failure in school.

Until very recently, such students were rarely included in gifted education programming at their schools.

I recently received the following letter from the administrator who reached out to me for the webinar. It is included below with her permission.

The benefits of placing 2e students in a gifted cluster class

This particular young man was on the autism spectrum and also extremely gifted — especially in math. He had a photographic memory for words and spelling. He would refuse class work that involved any form of writing or coloring. He would crawl under tables, yell at teachers and get aggressive, and leave the classroom whenever he felt like it.

He was unmotivated by "reward" items or positive attention. He refused to do any work sent home as he "saw no purpose in it." Although his test results were in the gifted range, the school and the parents thought the high-ability class would be too unstructured for him to handle due to his autism.

After two years of no improvement in work refusal or behavior (though he continued to excel academically during assessments with his accommodations), we all finally conceded that the only thing we had not tried was to put him in the high-ability class. So we placed him in a high-ability class for 3rd and 4th graders (split grade, but all gifted).

In that setting, the teacher compacted the curriculum for him and others and he was able to test out of the entire 3rd grade curriculum, except for a few math standards to which he had not yet been exposed. He was able to join many of the 4th graders in the class for their instruction in language arts and math. Inappropriate behaviors didn't gradually go away, they just actually stopped!

His teacher provided extension activities related to robotics and engineering that the student loved, and he even started writing on the computer to gain access to preferred materials and activities.

He is now in 8th grade and is in all advanced classes. He is well-behaved, mature, and polite. Refusal doesn't even come up. Mom doesn't fight with him about homework. He still struggles with group activities as he would much prefer to work alone, and he has just a few close friends, but he is happy and is now thinking about what career is in his future.

Access to gifted education strategies completely changed his life (and ours too as his teachers and parents). Our school learned a valuable lesson through this young man. High ability strategies can work for all kids and providing the best possible learning environment for any student can bring miraculous changes.

Chapters written by experts in the field give readers all they need to know to not only recognize, but successfully parent and teach, twice exceptional learners. Thirty years has made a big difference in what we know about how to nurture and educate these unusual students.

Susan Winebrenner is a consultant and author who works with school districts to help them translate current educational research into classroom practice. Susan has a passion for motivating and teaching students at both ends of the learning continuum. She has co-authored two books that have appeared in several editions for more than 20 years: "Teaching Gifted Kids in Today’s Classroom," and "Teaching Kids with Learning Difficulties in Today's Classroom." Her other co-authored books include "The Cluster Grouping Handbook" and "Differentiated Lessons for Every Learner."