A surprising new use of virtual reality — Teaching empathy 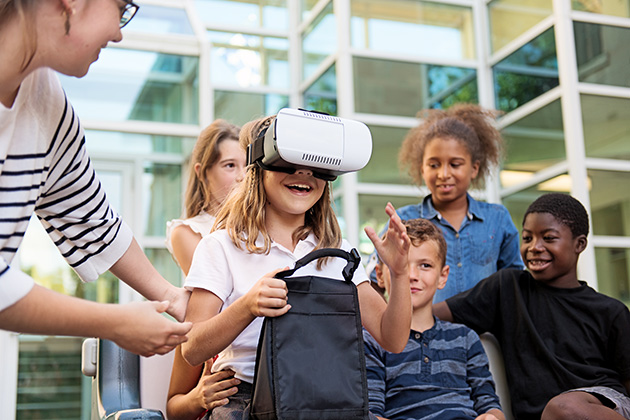 "It is exciting to consider what could be accomplished if the power of virtual reality were harnessed for education rather than gaming; if developers turned their resources away from creating games that teach children how to steal cars and kill people and toward allowing them to explore history, science, art and other subjects in innovative new ways," wrote Charles Sahm, director of education policy at the Manhattan Institute, in US News and World Report back in October.

Sahm's piece joins various articles published over the past six months about the emerging use of immersive virtual reality as a teaching tool for exploring academic subjects. VR in the classroom remains a hot topic in 2017, yet with a slightly different twist on subject matter — teaching empathy.

For example, sixth-graders from Flood Brook School in Vermont met three of the 30 million children driven from their homes by war when they were immersed in "The Displaced," an award-winning video from The New York Times using its free VR app.

"I have never seen anything like it," blogs Rachel Mark from partner Tarrant Institute who sat in on the class. "Every student was completely absorbed and mesmerized."

"Emerging evidence suggests that one of VR's biggest strengths is its ability to tap student emotions, notably empathy and the can-do confidence known as self-efficacy," wrote science journalist Chris Berdik in his recent column in The Hechinger Report.

"To combat the perceived divisiveness among one another, we must further develop our empathy muscles in and across our communities," said Grace Lau, Director of Virtual Reality for Global Nomads Group, producers of One World, Many Stories, a popular new VR lesson plan featuring three immersive virtual reality videos of young people distinct different geographies and cultures.

"Through putting on a virtual reality headset, we can be fully immersed into an alternate reality, giving us an opportunity to experience the lives of the 'other,' in a profound way."

Building cross-cultural bridges isn't necessarily new to many educators nor this particular nonprofit. Prior to launching the VR series just over a year ago, Global Nomads used video conferencing to foster conversation between youth from South LA and Syrian refugees living in Amman, Jordan, to cultivate curiosity and new understanding of each other.

"We have always used technology to help connect young people who would otherwise not have a way to connect, to promote global awareness, curiosity and critical thinking," said Abigail Finck, the marketing manager for Global Nomads in Berdik's article.

Another group on the forefront of investigating immersive virtual reality's educational potential is foundry10. Last school year, they gathered data from collaborative pilot programs reaching 390 students between 12 and 18 years old in the U.S. and Canada.

"The teachers used the technology in the way that made sense for them and their students, and as a result we were granted a view at a wide variety of different ideas for how VR can enhance classroom learning," reports the site.

The results of findings and data gathered over the past three years showed that students consider virtual reality's role in education as a means of helping students understand alternative perspectives and develop empathy as second in importance only to being a motivator. They also see its potential in assisting them to better retain what they're learning and in connecting their academic learning more closely with the real world.

Sharing Sahm's concern about the consequences to the self and society when this technology is used in violent games, Bailenson is dedicated to finding ways it can make the world a better place, especially in the areas of empathy, education, environmental conservation and health. His research explores the psychology of VR, how virtual experiences lead to changes in perceptions of self and others.

Small-scale studies at the lab point to this technology's potential in influencing behavior. In one, participants who had the virtual experience of cutting down a tree complete with a vibrating joystick "chainsaw" were compared with another group just given statistics on the astounding number of trees used to make paper products. Immediately after, researchers "accidentally" spilled a glass of water and noted that members of the VR group grabbed significantly less tissue to clean up the spill than the others.

Given its powerful nearly visceral nature, virtual reality experiences show promise for igniting empathy in today's students. Still, students who experienced VR first hand in the foundry10 pilot cautioned that it should not be overused, even for educational purposes.

"Students were quite vocal that VR could be a powerful, and sometimes overwhelming, experience," reports the pilot overview. "Carefully curating educational content and priming students for potentially overwhelming content is crucial for a comfortable immersive experience."