A journey on the Blue Ridge Parkway: Part 2 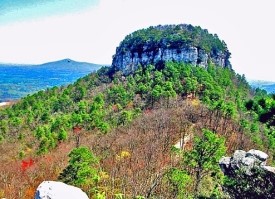 After leaving Mount Airy, we drove to Pilot Mountain, a rugged mountain rock with walls rising 1,400 feet above the valley floor. To the native Saura Indians, the mountain was known as “Jomeokee,” the great guide, or “Pilot”. The mountain is noteworthy as it provided a guide to Native Americans and early European hunters in the area.

Returning to the Parkway at Fancy Gap, we proceeded south into the rural heart of North Carolina. At MP 213, we arrived at the Blue Ridge Music Center where, from May through October, visitors can enjoy the sounds of the time-honored South.

Find a parking space, pull out the lawn chair, sit, clap your hands and stomp your feet to the sound of banjos, guitars and old-style fiddlers. Here you find music makers of country, bluegrass, southern blues and gospel. The performers are mostly music lovers of the local area.

Further along, we passed Cumberland Knob, which provided a different view of Stone and Bluff Mountain. It reminded us of a favorite off-road spot. The Country Store on the mountain is an aged building with open beams, wooden floors, rustic cash registers, pots, pans and 19th-century candy for the kid in all of us.

We especially enjoy sitting on an old wooden porch swing while eating a huge double-dip ice cream cone. It doesn’t get any better than that!

At MP 270 we unexpectedly discovered the Northwest Trading Post. It is an interesting stop to stretch your legs, enjoy the country air and stroll among the trading post’s unique, creative and artistic products on display.

The next morning, we passed Price Lake, one of North Carolina’s treasures, a freshwater impoundment high in the mountains of Boone County, surrounded by the Pisgah National Forest.

It is famous for its rugged character and consists of two peaks. A paved road leads to Linville Peak and access to the Mile-High Swing Bridge, where, on a clear day, they say you can see for miles. On the road to the summit there are wildlife exhibits and picnic areas. 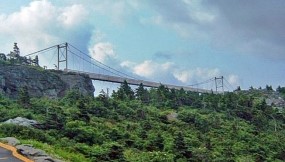 The Linn Cove Viaduct is a marvelous engineering structure on the Blue Ridge Parkway consisting of numerous S curves that snake around the slopes of Grandfather Mountain.

It was completed in 1987; the last section of the Parkway to be built. It was awarded the President's Design Award, which states in part, “…results in an elegant curving ribbon that caresses the terrain without using it as a support. It gives the motorist the sensation of driving tantalizing on air while the earth goes by." 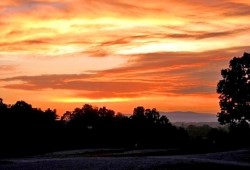 As the sun set at MP 330, we exited for the day to find lodging in Spruce Pine, where we also located a charming restaurant called Lazy Susan. It was a simple little family-owned place with southern décor and two large tables. Our “all you can eat” meal was placed on two large lazy Susans for serving ourselves. I was surprised at the numerous choices of delicious southern dishes served.

In the morning, we returned to the Parkway at Gillespie Gap, making a quick visit to Little Switzerland before heading towards Crabtree Falls. The falls, a 70-foot cascade on Big Crabtree Creek, require a hike of almost a mile down to visit. In the spring, it is an impressive walk through multiple displays of wildflowers. From Greentree Knob, we viewed Mount Mitchell, the highest peak east of the Mississippi River at 6,684 feet.

Craggy Gardens is near MP 365 and is a high-elevation overview. Our drive to the top provided magnificent views with rhododendrons in full bloom. The flowers on both sides of the road with trees crisscrossing above made for driving through a sweet-scented wilderness tunnel.

As we drove higher, we noticed a noticeable change in the temperature. It was much cooler. In season, wild blueberries grow along the trails and are yours for the picking.

Beyond the Asheville exits at Elk Pasture Gap, we entered the Mount Pisgah range, a very popular recreation area. At MP 325, we stopped to explore Devil’s Courthouse. Bygone days tell us Cherokees and settlers believed that the rocky summit was haunted by demons, yet all we saw was an awesome view of South Carolina, Georgia and Tennessee. Near Richland Balsam, a point in the Balsam Mountains, we crossed the highest point on the Parkway.

Entering the Cherokee Reservation, recreational vehicles should plan ahead. The three tunnels within the reservation are restricted to vehicles with heights no greater than 10’5”. Two of the tunnels are in the 11-foot range; however, a single tunnel is only 10’6” high. 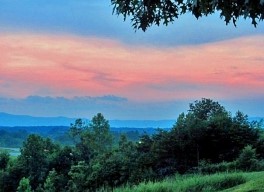 Along the rugged mountains between North Carolina and Tennessee lie the Great Smokey Mountains, a land sacred to the Cherokee nation. In Cherokee, it means Land of the Blue Mist.

It is a natural frontier of American beauty, a land remaining wild and craggy, a land of towering trees with the sounds of song birds, shadowy hollows, gentle streams and dazzling waterfalls.

It is a land of misty mountains, as a blue haze hovers over the area, inspiring its namesake. It is a land that has inspired storytelling of early Native Americans, frontiersmen, and statesmen whose lives are immortalized in southern history. It is a land to visit!

At the Oconaluftee River crossing, we ended our southern journey at MP 469. It has taken us seven days and nights to complete the entire Parkway where we met so many wonderful people living in a scenic and uniquely American countryside.