8 ways to fail at being a manager 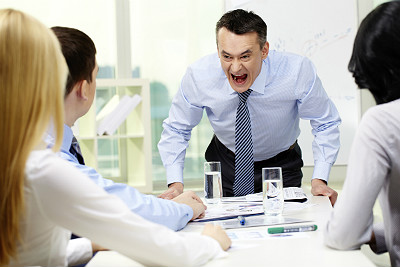 For leaders, it's understandable that as the going gets rough, tensions rise up. It can be a stressful job running a company and being in charge of a good majority, if not all, of its employees.

So when a negative situation occurs with an employee, it can be hard to resist blowing up or complaining about the incident. But it's important to keep in mind that how you react to situations should be at a professional level, because as a manager you have chosen to take on a leadership role.

Not only does your attitude reflect who you are as a person, but it also affects how the company is perceived. As a manager, you are like a walking, talking billboard for the company. If you display unprofessional behavior in a fit of rage, others will notice. They will talk, and just like that, there goes the company name and possibly your career.

With that said, here are eight unprofessional behaviors I have witnessed at previous jobs that need to be avoided when you're put in a leadership or management position:

When conflict occurs or an employee does something outrageous, some managers have a tendency to raise their voices when they get upset. Although it's human nature to react that way, it's still no excuse, and this is where self-control needs to come into place.

According to several studies done by the Journal of Applied Psychology, researchers found that "verbal aggression tends to impair victims' working memory, reducing their ability to understand instructions" and complete "basic tasks [such as] operating a computer." So rather than act on impulse, it's best to take a step back and breathe before confronting the person who has made you angry.

To reprimand is to express severe disapproval of a person's actions. To do so publicly is to shame that person and cause unnecessary emotional harm. This technique should never be used, but sadly it's a common mistake people who are fired up tend to make.

When it comes to reprimanding, the goal of a leader should be to correct an employee's misconduct, actions or attitude; so the problem needs to be addressed privately with the individual.

At my previous job, I had a manager who would complain constantly about co-workers' actions that she didn't approve of. I would walk by, catch parts of her heated conversation with another manager or co-worker and ask myself how someone so unprofessional could have been promoted.

As stated earlier, the attitude of someone in a leadership position affects how a company is perceived. A leader with a positive, warm attitude will give the company a "good name," but one with a negative, bitter attitude will do just the opposite.

4. Letting personal problems get in the way

Everybody goes through their own personal issues at home, whether it be related to relationships, health or finances. It can be challenging to face another day at work when it feels like you've got a whole load of problems waiting for you there on top of the ones you already have to deal with at home.

It's perfectly acceptable to confide in your colleagues — if you hold that sort of relationship with them — but it's not appropriate to discuss your divorce drama or other touchy topics that may be going on in your life within earshot of potential customers. It's also not OK to take out frustration from those problems on your unsuspecting employees.

As hard as it is, part of being professional is knowing how to manage your problems and not let them manage you.

As a leader, a big part of the role consists of handing down orders to other employees. Because it can be a prideful position, it's important to be wary of the way instructions are given out.

Instead of ordering someone around without the word "please" in your vocabulary, it'd be more rewarding to just use common courtesy. The company could not thrive or function without its employees, so showing them the same respect you expect them to give you is crucial. Employees also like to know that all of their hard work is appreciated, so try not to exclude "thank you" from your vocabulary either.

Another important role of a leader is to be a hard worker.

A good manager will inspire others to tackle difficult tasks without hesitation and possibly pursue a leadership position themselves. On the other hand, an unmotivated manager who pushes all of his or her work onto co-workers will only create an unhappy work environment and probably result in termination from the company if enough complaints get passed around.

There always happens to be a scenario either at school, in the family or at work where you run into someone who is "the favorite." One of the least professional things a leader can do is favor an employee over all the others, especially when it's made obvious.

Not only does this type of behavior make everyone else feel incompetent and underappreciated, but it also tends to create hostility in the work environment, specifically toward the manager and favored individual. It's just not a good call for a healthy, professional work environment.

When an employee frequently fails to show up to work on time or produces some sort of repetitive misbehavior, leaders must ask themselves, "Is there a reason this keeps happening? Am I not handling it the way I should be that it's become a pattern?" The answer is probably yes.

Leaders cannot be hesitant or afraid to confront a troublesome employee because — more likely than not — it will become a long-term problem, and the company could suffer from it. Not to mention, the employee will lose respect for the manager.

So when there's noticeable behavior that needs to be confronted, think about what you need to say, be bold and just go for it. Otherwise, the employee will think he or she can just continue getting away with it.

Being in a leadership position is stressful work, but it's important to set an example for employees. Avoiding these eight unprofessional behaviors will help you avoid failing as a manager.