5 tips to improve your clays shooting 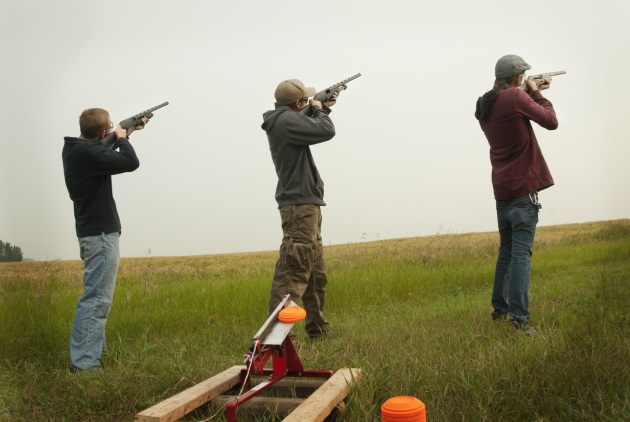 Sporting clays is often called golf with a shotgun. In sporting clays, you ride a golf cart from station to station along a course that, in one way or another, simulates upland game-bird hunting. And like golf, sporting clays (and other clays sports such as skeet, trap and 5-stand) demand the same mental rigor, practice and discipline to improve your performance.

With the clays sports and golf you have to focus on your swing, swing follow-through, foot position and unwavering focus on the clay target and golf ball.

There’s certainly no shortage of opinions and theories on the best way to become a better shotgun shooter. Still, here are five basic tips that should help with your clays games.

The gun barrel should remain in “soft focus” while 100 percent of your visual concentration is on the target.

Remember, everything in the shotgun sports starts with the eyes. They transmit information to your brain and in turn to the rest of your body. Your ability to analyze target speed, distance and line of flight demands that your eyes fully concentrate on the target.

If you check your gun barrel as you’re swinging for the target, that means you took your eyes off the target and you’ll probably miss the window of opportunity to break it.

Good target focus also helps improve your confidence because it tells your mind that you’re in control. Even if you miss the target, focus delivers feedback to your brain that builds a library of target presentations. For example, when it’s time to take a shot, your overall focus in individual shots recognizes a similar shot — boosting your confidence.

Next to target focus, the most important thing you can develop is the ability for self-correction. If you miss a shot, ask yourself why. Replay the shot in your mind.

Pay attention to yourself and to the target without being overly self-conscious.

You know the old saying, “He who hesitates in lost.” Too many shooters spend so much time trying to figure where to break the target that by time they reach a decision the target is long gone — either by distance or by succumbing to gravity.

There’s a technique in hunting game birds called “instinctive shooting.” It’s based on the idea that we can all point at something and if your finger were a shotgun our mind would instinctively point at the right place to break it.

Of course, it all starts with focus, but that’s a feeder to the same pointing instincts of your brain that allowed Neanderthals to throw a spear and land dinner.

The idea of moving faster and shooting more quickly essentially means trust those Neanderthal instincts. Swing your shotgun toward the target and when your brains says shoot it, don’t second guess the shot, just pull the trigger! 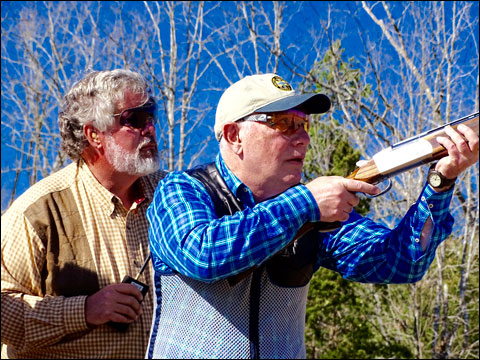 A qualified shotgun coach can help accelerate your progress in areas such as focus, rapid target acquisition, proper gun mount and mental training.

Efficiency in movement saves precious seconds that helps make you a quicker and more consistent shooter. There’s two points to mount a shotgun: your shoulder pocket and your cheek.

And there’s also two techniques to mount a shotgun: pre-mounted and low gun.

With pre-mount you put the stock fully against your cheek bone and into the soft pocket in your shoulder, and then call for the target. This method is used in clays sports where the targets are somewhat repetitive such as skeet and trap. You already have an idea of where the target comes from and where it’s going so it’s OK to keep the gun in a static mount.

But in wingshooting and sporting clays the target can come from anywhere, and you need both eyes (bifocal vision) to see it as soon as possible and follow the path to the best break point. For these sports, you use the “low-gun” position where the end of the stock is in your armpit. As the target comes into view, the swing and mount to the shoulder and cheek are integrated in a single move.

Often, people shooting low gun will “box” their mount — meaning they make it into two moves: out from the shoulder and then up to their face and back to the shoulder (forming a right-angle, box-like motion). Boxing will cost you time and accuracy.

Remember, from the low-gun position, as you swing toward the target you’re raising the gun and as soon as you feel the stock touch your cheek, pull the trigger. 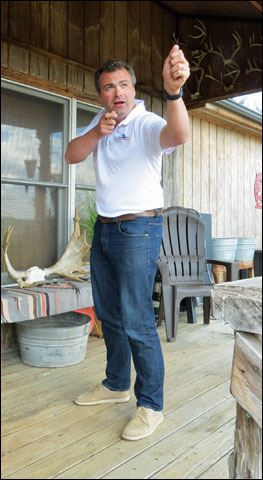 When swinging the shotgun, keep your grip pressure evenly distributed with both hands.

4. Pushing Rather than Swinging

Some people tend to push their shotgun through a swing from the back (the grip) rather than leading it from front (the forend). If you swing the shotgun from the pistol grip two mistakes occur: you can peel the gun away from your face, confusing your eyes about the proper target picture; and if the gun is away from your face it will kick you much harder.

Leading the gun through a swing actually involves both arms in a simultaneous move. There should be a 50/50 balance between the forend and grip. And although your front hand seems to be directing the lead, in fact you’re swinging the gun from your waist.

Hold the gun against your face and cheek, the front hand holding the forend for stability and swing the shotgun from your waist. Swinging with your arms can cause the gun to move away from your body and result in wildly inconsistent swings.

Think of yourself as tank turret: the gun barrel doesn’t move laterally, it’s the turret (your waist) that swings toward the target. From your waist, you swing the shotgun in a smooth and even motion right under the line of the target.

Like other sports clays shooting can lead you to becoming anxious about your performance. Don’t worry about your overall scores or those of the people you’re shooting with. Take each target one at a time. This way you’re competing against yourself, not others.

Likewise, some clays sports involve simultaneous pairs, where two targets are in the air at the same time. Control the pressure in these scenarios by thinking of them as two individual targets.

Avoid self-inflicted, and possibly detrimental pressure, by concentrating only on the shot at hand. Believe in yourself, focus, and take the shot.

The basic rule to succeeding at the shotgun sports is to enjoy yourself. Give yourself permission to miss shots with the underlying motivation to constantly improve. If you find yourself in a slump or repeating the same mistakes, start over with the basics.

And don’t underestimate the value of qualified shotgun coach.