5 counterintuitive principles that will change your life 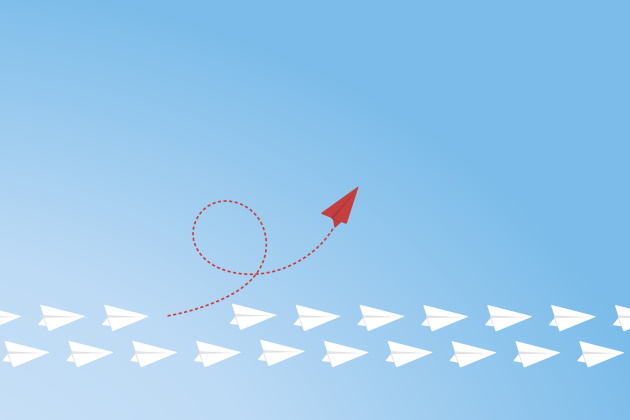 It’s not easy to be counterintuitive and go against the old paradigms. Yet history teaches us that most breakthrough successes have come from running counter to the prevailing paradigms.

Where would we be today if, in 1981, Bill Gates of Microsoft had believed his own pronouncement, “640K of memory ought to be enough for anybody,” and stopped pushing the limits of what computers could do? And where would the movie industry be if Harry Warner, founder of Warner Brothers Studios, hadn’t later challenged the world’s preference for silent movies, when he said, “Who the hell wants to hear actors talk?”

You wouldn’t know or enjoy the innovations brought to you by Microsoft or media giant Warner Brothers if Bill and Harry had gone along with the conventional thinking, the paradigms of the day. In fact, most of the innovations that are part of your life exist because courageous people challenged the existing paradigms and went in a different direction.

So, take a walk on the wild side, try these five counterintuitive principles for yourself, and see if they help you achieve breakthrough performance.

1. If it Ain’t Broke, Break It Purposefully!

Conventional wisdom says that if something works well, don’t try to fix it. That’s OK until it runs its lifecycle, which most things inevitably do. Recognize the warning signs of diminishing returns — doing more and more of the same, only harder, and watching your results dwindle.

A car manufacturer can only ride a model for so long before it has to change models or totally redesign it. Take the Honda Civic, for example. It is one of the world’s most popular cars for 2020 and it has been redesigned dozens of times since its U.S. introduction in 1973.

The key is not to break things for the sake of breaking them, but to do purposefully at the right time and in an orderly way. Look for the moment when you begin to experience diminishing returns, which is your early warning to get planning for the next generation.

How much control do you maintain over how an objective is accomplished? You gain more control and a high-quality outcome by describing the expected results in detail and letting your staff develop the approaches they’ll use to accomplish the objective. This is a fundamental principle of what the world’s best managers do (as cited in "First, Break All the Rules").

Let’s suppose you work with a team of six relatively experienced people that are generally familiar with a particular objective. Clearly articulate your specific expectations for the objective and then ask the group (or each individual) to develop a plan to accomplish the objective. By doing this you unleash the creativity of each person, and because it is his or her own plan, you’ve gained each team member’s buy-in to achieving the objective.

Monitor progress, offer encouragement, and watch how the team meets the objectives because you gave them control for how it was to be done. Conversely, by not doing this and remaining the single point of control, you become the small end of the funnel through which your department’s work flows. Your department loses the additional productivity and staff buy-in for the cost of having to be in control on everything.

3. Don’t Hire in Your Own Image

If you have hiring responsibilities, then you’ve been successful. It is natural to look for people who are just like you when you need to add to staff. You may be successful, but you aren’t perfect — you have weaknesses and blind spots, like every other person on the planet.

The problem with hiring people in your own image is that when you do, you institutionalize your weaknesses and blind spots, which, in turn, will reduce your team’s successes.

A team’s strength is found in its diversity. If a baseball team manager only had first basemen on the team, the team is weaker in every other position. You need diversity on the team so that you place the best players at each position.

Hiring people with diverse skills, perspectives, and behaviors means that the team won’t be paralyzed by groupthink. Learn more on team diversity in this article.

We live in a world where we are obsessed with speed — speed dating, speed walking, speed reading. By now we must be up to Fast and Furious 20!

We let the need for speed direct our thinking whenever we are faced with a new assignment — we think, “What’s the fastest way to get this done?” Masters of the Go Slow to Go Fast Principle have learned that the only way they can ever successfully sustain speed and quality in executing their job is through intentionally instituting “go slow time.”

In order for a physician to move with speed to save someone’s life, she or he must have first put in countless “slow hours” of study and practice. That All-Star first baseman could not make the game winning play if he or she hadn’t visualized and practiced it during “go slow” time. And that “let go to get control” manager had to build trust with staff over “go slow” time in order to let go with confidence.

Read more about the Go Slow to Go Fast principle in this article.

5. Fear of Offending Offends More Than Offending Itself

How many times have you found yourself a situation like this: Your co-worker Pam has a certain bad habit that you and everyone else on staff sees, but she’s oblivious to it. Everyone is afraid to address it directly with Pam, fearing she will somehow be offended.

You, like your co-workers, have tried to ignore it or use a subtle approach to address it with Pam, but to no effect. So, eyes roll whenever she does that thing and people talk about it behind her back, but no one does anything to help her.

Because no one has the courage to address the issue in a loving and respectful way with Pam, she doesn’t know that she is suffering negative career consequences. Maybe that includes being overlooked for a promotion or raise, which could help her family.

Wouldn’t the more caring thing to do be to address it in a kind way with Pam, before it becomes what she is best known for? And what would she say if she knew that you were deliberately holding back something that could help her? Consider the advice in this post about having the courage to speak up.