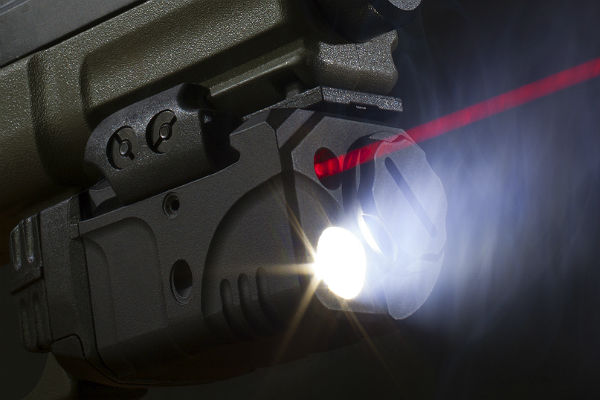 I want to start by saying that I love laser sights. I own several of them and use them on high-powered rifles, .22s and airsoft rifles. I bought my first Crimson Trace laser for a Kimber 1911 12 or 13 years ago.

I use them for night shooting with night vision, and I've used them a lot with my boys since they were very young to introduce them to shooting. In the right hands, they're a great tool on a defensive gun, but there are some big myths about them.

Myth 1: Lasers will give away my position

A guy recently asked me a couple of great questions on Facebook about lasers that highlighted this first myth. In short, he said using a visible laser sight on a defensive pistol in a gunfight will get you killed because the enemy will know exactly where you are.

On TV and movies, this appears to be true, but the reality is a little bit different. Two of the biggest problems with this myth involve science and tactics.

Science. For all intents and purposes, lasers (even visible lasers) are invisible until they hit something that reflects light. That could be an object, moisture, dust, smoke, etc. Depending on the laser, there will be a little or a lot of light at the "muzzle" end of the laser, but there won't be a beam of light going from your gun to where the muzzle is pointed unless there is something in the air that reflects the laser light.

In a firefight in a warzone with lots of dust, smoke, explosions and dirty ammo that causes excessive smoke, there will be more of a "beam of light" effect, but in a self-defense situation, you're much less likely to find yourself in a situation where you have the "beam of light" going from your laser to the target — especially before the first shot.

Tactics. TV and movies show two things pretty consistently with lasers — there's a visible beam from the laser to the target and the laser is always on. If you need to keep your location unknown, it's just as bad of a tactic to turn on your laser and keep it on as it is bad to turn on a flashlight in a low-light situation and keep it on. When you need to stay hidden, you should only turn on your laser when you would otherwise be verifying sight alignment on your target.

But back up a second and think about the kind of typical self-defense situation you're likely to face.

Chances are the attacker not only knows where you are, but has selected you as his intended prey. You are the goal or you're standing between him and his goal. He's going to use subterfuge to close the distance on you to 10 feet or less and use speed, surprise and violence of action to do what he wants to do with/to you.

He knows where you are, and he doesn't need a laser to figure it out.

In these cases where you can't hide your location, don't worry about the laser giving it away.

Myth 2: Lasers will help me shoot better in the dark

Lasers won't help you identify a target in a dark room. You still need light for that. Once you can see your target, lasers, night sights and red dot sights will all help you aim better than factory sights that aren't visible in low light.

"All I have to do is put the laser on the bad guy's chest, and he'll stop," you might think. This is true with some low-level attackers, but not for determined attackers who are drugged, drunk or deranged.

For people who insist on believing this myth, I suggest buying a toy gun and duct taping a cheap laser pointer to it. That way, when you hesitate to shoot an attacker, he'll only end up with a toy and a laser pointer when punches you in the face and takes it from your hands. (That's not real advice. I only say it to highlight how bad of an idea it is to depend on the laser without being willing to use the pistol.)

Myth 4: Lasers will make me a faster shooter

This is a tricky one. Many shooters shoot slower with a laser because they're shocked by how much it's moving around.

In a high-stress situation, a laser will probably cause you to shoot slower but have more hits — if you've got good fundamentals and don't jerk or mash the trigger. In compromised positions, like I'll address in a minute, they do make you a faster shooter, but that's not what most people are thinking about when they make that claim.

Myth 5: I don’t need to practice because I can't miss with a laser

Lasers won't help you grip the gun correctly, present the gun correctly, naturally aim the gun so you're only verifying alignment with the laser/sights, press the trigger without jerking or mashing, or manage recoil. All of these take practice.

So, what's the best way to train with lasers?

Specifically, lasers will help with the following bad situations:

All of these are great reasons to use lasers, but a successful outcome — regardless of the sighting method you use — depends on practicing the fundamentals enough so you can execute them under stress without thinking.