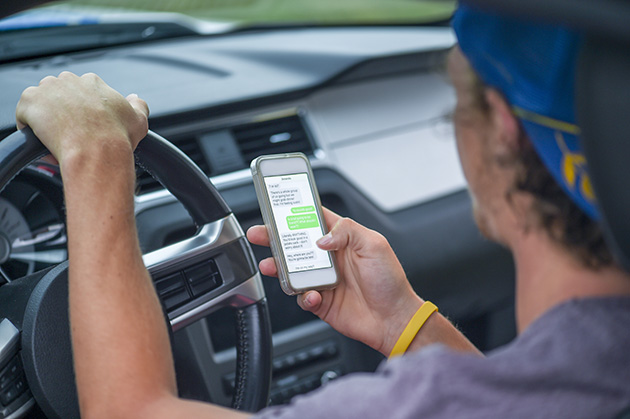 Distracted driving contributed to the deaths of 3,477 people and injured an additional 391,000 in crashes reported in 2015 by the National Highway Safety and Traffic Administration (NHTSA).

According to the NHTSA, an estimated 660,000 drivers on our roads use cellphones during daylight hours. While teens make up the largest age group of drivers distracted at the time of a fatal crash, older adults are also included in this risky category of drivers.

The numbers of those using cellphones held up to their ear did decrease from a rate of 4.3 percent in 2014 to 3.8 percent in 2015. Handheld cellphone use is highest among 16-to-24-year-old drivers and lowest among those over the age of 70.

But age is a factor related to an increased risk when using a cellphone for texting. In a 2015 study of highly experienced texters from ages 18 to 59 in a driving simulator, researchers found an increasing rate of lane deviation with age in driving simulation studies. The ages studied were ages 18 to 59.

The use of handheld cellphones for talking is banned in 14 states and the District of Columbia. An additional 24 states have restrictions on use of cellphones for novice drivers. 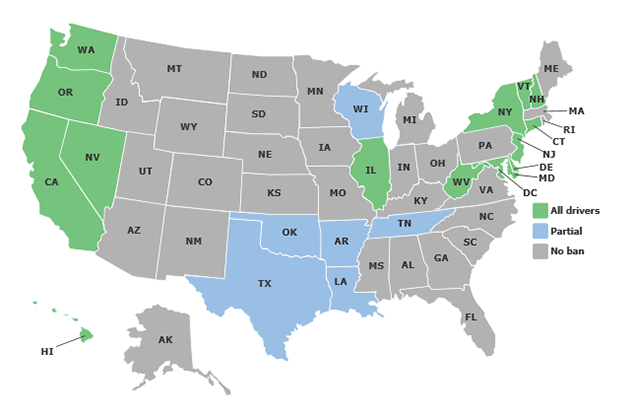 Map of handheld cellphone bans while driving in the U.S. (Image: IIHS)


Distracted driving in the form of texting and driving is particularly problematic, and legislation has been enacted in many states to restrict texting. Texting while driving is prohibited in 47 states and the district of Columbia. Texas became the latest state to pass legislation with Gov. Greg Abbott signing a texting ban into law earlier this month.

Missouri only prohibits drivers 21 and younger from texting, while Montana and Arizona remain the only two state with no texting while driving restrictions. 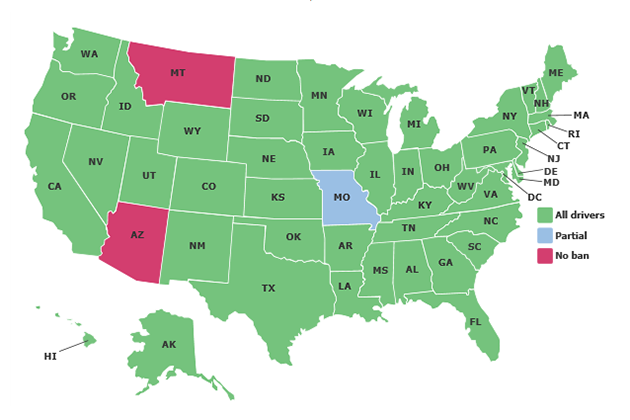 Map of texting while driving laws in the U.S. (Image: IIHS)


The Property Casualty Insurers Association of America (PCI) reports that nine states have passed laws and three states have laws pending to strengthen enforcement, increase penalties and fines, and target education and awareness around distracted driving. PCI is reporting a 14 percent increase in traffic deaths over the past two years, and this is the largest increase over a two-year period in more than 50 years.

"Even though most states have put in place laws that restrict texting while driving, more action is needed to address distracted driving and the sharp spike in crashes and traffic fatalities that have occurred over the past few years," said Robert Passmore, PCI policy vice president. "While there is no single answer to addressing the problem of distracted driving, the new laws passed in 2017 are important because finding the solution to this epidemic involves enacting stronger laws, increasing enforcement, raising public awareness and creating a culture of personal responsibility."

The state of Iowa recently passed one of the nation's strongest anti-distracted driving legislation. Starting in July, a law enforcement officer will have the authority to pull over drivers if they suspect a driver is using a cellphone to send messages, take photos or otherwise distract them from driving. The officer does not have to observe driving infractions. Further, if there is a fatality and cellphone use was determined to be a contributing cause, the class of charges can be such that the offense is punishable by up to 10 years in prison.

The law in Arkansas also allows an officer to pull a driver over with cellphone use being the primary offense. A law in the state of Washington called the Driving Under the Influences of Electronics Act (DUIE Act) also goes into effect this July. The law bans all use of handheld technology such as phones, tablets, games and laptops while driving.

Every day as many as eight people die due to distracted driving, and another 1,161 are injured. All 50 states should ban texting and be encouraged to move toward laws that further restrict and penalize distracted driving.