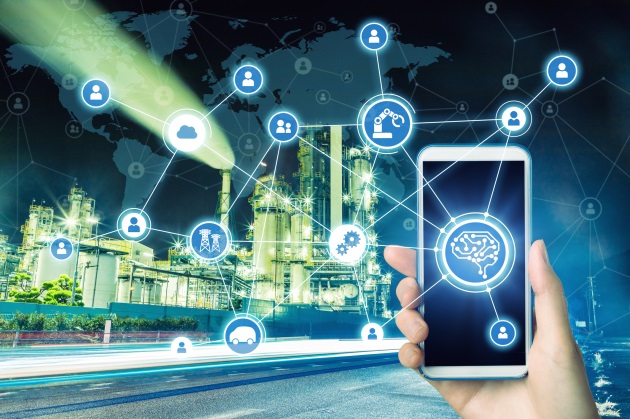 Nearly 50 years ago, a few caffeine-dependent students in Carnegie Mellon’s computer science department built a light sensor and software to sense the availability of cold soft drinks in a Coke vending machine and connected it to the ARPANET, where they could see the status remotely, giving birth to the “internet of things.”

But few could have predicted how widespread the technology would become. From Fitbits and smart homes and a vacuum you can control from anywhere on the planet, the consumer internet of things has evolved into a fixture in our everyday lives. It’s only a matter of time before the internet of things transforms the industrial sector as well.

Commonly acknowledged benefits to businesses include increased factory efficiency through intelligent automation, earlier identification of issues, and proactive management of equipment. What’s often overlooked, however, is the positive impact it can have on manufacturing workforces.

To capitalize on the new future of work, it’s important to innovate with human capital in mind, starting with a vision of how workers’ lives can improve with the aid of the industrial internet of things.

For example, collaborative robots (cobots) are designed to be used alongside a human worker. They increase overall productivity while allowing their human counterparts to focus on higher-level job functions.

Cobots are already performing rudimentary and time-consuming activities like packaging and other repetitive tasks, such as small parts assembly. They do so in the same space as human workers, often overseen by the workers who used to perform the manual tasks. By augmenting human labor, cobots increase overall productivity for both the worker and the company.

Many manufacturing processes haven't changed much since the assembly line was invented more than 100 years ago. Even with developments in ergonomics and worker safety, manufacturing continues to be one of the top five most dangerous jobs in the country. Repetitive stress injuries alone affect 1.8 million workers each year at a cost of $20 billion. When applied in manufacturing facilities, the industrial internet of things can make workers safer.

Consider the case of a German bionics company that rolled out an exoskeleton connected to the industrial internet of things to limit the strain of moving objects by strengthening worker movements. The exoskeleton used the industrial internet of things to connect to AI programs that customized operations for specific plant floor uses and the needs of each individual worker. This is just one example of a wide range of possibilities for worker safety; another could include wearables that alert supervisors to worker drowsiness, temperature fluctuations and falls.

Because the industrial internet of things will transform how work gets done in manufacturing, workers’ roles must also change. Just as technology has advanced the role of surgeons, who up until the 19th century might have also cut your hair, the industrial internet of things is likely to transform the tasks of today’s manufacturing workers. While past manufacturing jobs were largely marked by manual labor and repetition, tomorrow’s factory floor jobs can be expected to expand to include computer programming, data science and robot monitoring or maintenance.

With the rise of the industrial internet of things, manufacturing jobs will increase in complexity as well as compensation. The need for skilled workers will result in the repatriation of many of the jobs that have been outsourced abroad over the past several decades, enabling businesses to invest in their local communities.

Maintenance of manufacturing machinery can be a time-consuming manual process that includes paper checklists, hefty equipment manuals and routine physical inspections. The onus is on machine operators to identify when preventive maintenance is needed and to detect emergency warning signs.

Most would describe maintenance management as a painstaking necessity. Not doing it increases the risk that machines will slow production, break down and cause disruption, or even worse, injuries. Unplanned downtime alone costs manufacturers $50 billion annually. With the industrial internet of things, the need for routine maintenance doesn’t disappear; it gets smarter.

By using connected machines and sensors on existing equipment together with AI (machine learning), manufacturers can predict equipment failure before it happens while reducing the negative impact on workers or the business.

The industrial internet of things automates the analysis of copious amounts of data flowing in from smart machines around the plant. With AI to perform the heavy lifting of predictive analytics, operators are able to expend less time and energy on maintenance training and day-to-day operations. They can also reduce the stress associated with the need to identify early warning signs of equipment failure and troubleshoot issues remotely when they occur.

The industrial internet of things doesn’t just benefit the bottom line for manufacturers. Yes, it helps with getting products to market faster while incurring less expense and downtime, but equally significant is its impact on the workers on the factory floor who make production and operations possible.

Tipton Loo is vice president of digital edge (AI and IoT) at PK. As the experience engineering firm, PK works with world’s most customer-obsessed companies to create pioneering experiences and accelerate outcomes.