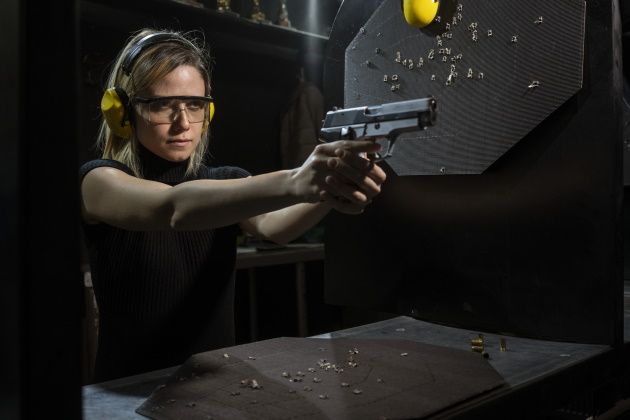 There are a ton of myths floating around about using a front sight focus on a self-defense pistol…myths like:

Let’s take a quick look at them.

Myth No. 1: You MUST always use a front sight focus.

I agree with this for bullseye shooting, 4H shooting, hunting non-dangerous game, and other specific situations. I also think it’s critical to practice front sight focus during every practice session and at the end of every string of fire (red dots are the possible/probable exception).

The brain will default to the simpler version of the skill unless you have trained the more complicated version. And, it’s worth noting that if you practice both, you will have a much greater chance of being able to actually do both under stress.

But to bust the myth of allfront sight, all the time, I’ll bring up a couple of examples…

A front sight focus will most likely be a bad thing in both of these situations.

But that leaves A LOT of room between close contact shooting and shooting at 10-30 feet with/without sights.

The argument here has a few valid origins, despite the fact that there are hundreds of firsthand accounts supporting both sides of this argument. When that happens, it’s worth digging into why different people experienced different realities.

Part of the stress response is that your pupils dilate and it becomes more difficult to focus on things up close. As you know, everyone’s stress response AND their level of response to the same situation is different.

In addition, the less trained someone is, the more likely that they’ll experience focus-lock on the threat they are facing. That’s normal.

But just because you may not be able to see your front sight perfectly clear doesn’t mean you can’t see it and use it while it’s blurry.

Similarly, just because you don’t think you’ll use your front sight in a high-stress situation doesn’t mean you shouldn’t practice with it.

To begin with, what if the shooting situation you’re fed requires more precision than you’re capable of without using your sights? It could be a mythical hostage situation or, more likely, a slightly longer shot, or a shot where the threat is mostly behind cover and you only have a foot, knee, elbow, or shoulder visible.

There’s a bigger reason to use your front sights, even if you think you never will in real life…

When people shoot without sights with a laser pistol, with sim rounds, airsoft, other visible projectiles, or on targets/backstops where hits are obvious, they generally correct their aim based on where they see their prior round impacting.

It’s a self-correcting loop that allows people to shoot very well without sights in a very short period of time.

But it’s a highly perishable skill that requires the visual, vestibular, and proprioceptive systems to be integrated and calibrated.

And in a real-world self-defense situation, it’s incredibly likely that you won’t get the feedback you need to correct your aim.

Unless you have the ability to use your sights to call your shots and correct aim based on where your sights are aligned.

Myth No. 3: Front sight focus is too slow.

When you are focused on a threat and realize that it needs shooting, if you want to shift your focus to the front sight, it takes time. A minimum of .10-.15 seconds.

This “blindness” is longer for some people than others. For some people, the muscles that change the shape of the eye aren’t used to shifting focus quickly…it’s like a 60-year-old who was a sprinter in high school who can’t sprint anymore. Tactical vision training can improve this. For others, the eyes move at different speeds and there is visual confusion until they get on the same page.

For others, their brain has a tendency to “overshoot” the focal length that they want when they shift focus. If the threat is 11 feet away and their front sight is 18″ away, their focus may go from 11 feet (overshoot 18″) and focus on 12″, then (overshoot 18″ again) and focus on 24″, and then finally settle on 18″.

The well-trained eye can shift focus from any distance to the distance of the front sight. This can be improved with tactical vision training or, in some cases, by wearing prism lenses occasionally.

When the visual system is working as it was designed, it’s common to see people making cold, sighted, first-shot hits (only hits count) quicker than they’re able to make hits with unsighted shooting. (Warmed up is another matter altogether. Once a shooter is warmed up and their senses are calibrated and integrated, point shooting is almost always faster and almost as accurate as sighted shooting…but there’s usually not a warmup period before a self-defense shooting.)

There are a few ways to handle this…pre-aiming is one. Another is to blend unsighted and sighted shooting together. The situation you’re fed may demand a shot faster than you can get focused on the front sight AND the backstop/surroundings/situation may support you making an unsighted shot or a shot where you’re aware of the sights and/or muzzle alignment, but can’t get the front sight in focus until after the first or second shot.

All three focuses are fine…target focus, midpoint focus, and front sight focus…IF your targets are telling you that you’re making your hits. Ideally, you want to be able to do all three…but front sight focus is the base-level skill that makes the other two happen easily and quickly.

The problem comes in when people refuse to focus on the front sight because the target gets blurry when they do. So, they try to shift their eyes back and forth quick enough to get both in focus at the same time, not realizing that the whole .10-.15 seconds of blindness happens each time they shift their focus.

And then, when they miss or shoot large groups, they may not know why…or just guess. If a shooter doesn’t know where their sights were aimed as they pressed the trigger, then how do they know whether the miss was because of an aiming error, a trigger press error, or a gun problem?

I was a little slow figuring this out. I had to have shooters do dry fire into cameras and have shooters aim completely inert blue guns at my eye to see it. This is not possible with live fire and most instructors haven’t had the opportunity to experience this in a high enough volume to appreciate it. But when they do, they see that when most people THINK they’re focusing on the front sight, they aren’t.

Busting this myth and getting a shooter to actually focus on their front sight oftentimes causes big jumps in performance, very quickly.

In addition, a front sight focus is one of the most effective ways to eliminate variables and figure out why you’re not making the hits you want. It’s a diagnostic tool. A fundamental shooting skill. And it’s something you can always come back to if/when you miss with other sighting methods or when the demands of the shot are beyond what’s possible for you without using your sights.

And it’s one of the reasons why, a few years ago, I started experimenting with targets that draw focus and aim into the bullseye better than traditional designs — so that shooters could finally focus on the front sight long enough to get the benefits that front sight focus provides.

But I had no idea how big of an impact a simple target design would have.

Once I started seeing the change in shooters on the line and hearing back from shooters who were using the target at home for dry fire, I knew I had to create a splatter target version. You can check it out here now.