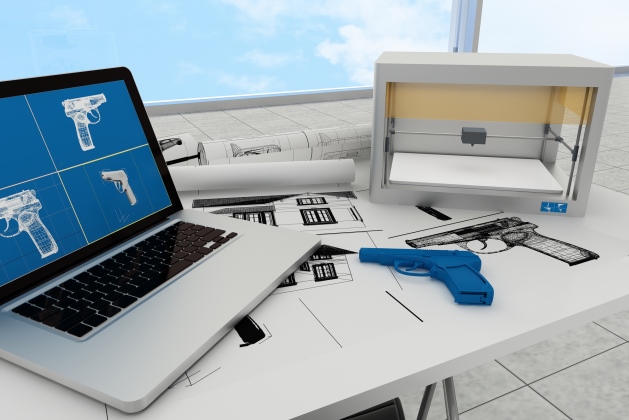 3-D printing is an advanced technology that uses machines, sometimes desktop-sized, to make objects from computer-aided design (CAD) files. Simple as that.

What’s not so simple is that the machines can be used to make almost anything. As more people have access to the hardware to make things, 3-D printing technology has been embraced as a transformative technology in manufacturing.

Currently, the issue of 3-D-printed guns is getting much attention as mass shootings continue and gun control remains as divisive as ever.

First, some background. A few years back, the media reported that not only is it possible to 3-D print functioning guns, it isn’t as difficult as it sounds.

A young man named Cody Wilson, who runs Austin-based company Defense Distributed, has been spearheading the 3-D-printed gun idea for several years now. In 2013, he became well-known for building the world’s first plastic firearm; its CAD files were downloaded 100,000 times.

Wilson considers himself a 21st-century Second Amendment gun rights guru of sorts. His plan is to make his website a "sort of Wikipedia of weapons manufacturing" — including AR-15 style rifles.

This is controversial because it places the ability to manufacture guns into the hands of anyone with access to a capable 3-D printer.

Although the federal government gave Wilson the green light in June to make the blueprints public, the night before the blueprints were to be published on Wilson’s website, a Seattle judge temporarily blocked their publication.

Judge Robert Lasnik stated in his ruling that "a clear and reasonable fear that the proliferation of untraceable, undetectable weapons will enable convicted felons, domestic abusers, the mentally ill, and others who should not have access to firearms to acquire and use them."

Needless to say, this decision does not sit well with Wilson or other 3-D-printed gun advocates who believe they have the right to make whatever they wish with their machines. They are also concerned that the First Amendment is violated by court-ordered internet censorship.

In true form, just after Wilson took the blueprints down from his company website, the internet responded.

Specifically, the "CodeIsFreeSpeech.com" website appeared, which is backed by Calguns Foundation, the Firearms Policy Coalition, and other civil rights groups. This website provides freely downloadable computer-aided design (CAD) files for the AR-15, AR-10, Ruger 10-22, Beretta 92FS, and other firearms.

There are other websites that have also published a number of CAD files for 3-D-printed guns, rendering this Seattle ruling against Defense Distributed seemingly irrelevant.

Even some gun control advocates acknowledge that 3-D-printed guns are a technological inevitability. In order to truly avoid firearm harm, conflict resolution and training/safety skills are central — not necessarily censorship.

In the meantime, Wilson’s lawyers will soon return to a Seattle courtroom. They seek to have the judge’s ruling reversed, leaving Wilson’s Defense Distributed site free to publish gun-making directions.

But if you are itching to get a jumpstart on printing that much-coveted assault-style weapon, there are already plenty of websites with the necessary information. You will simply need access to a 3-D printer and the maker skills to do the job correctly.