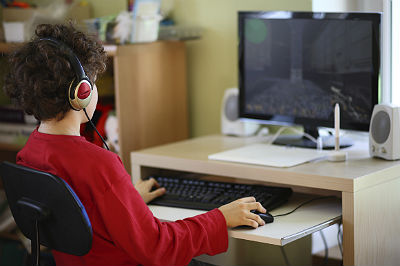 My two oldest sons — Brady (age 9) and Cameron (age 7) — are addicted to the video game Minecraft. If my wife Erica and I didn't heavily limit their time using it, it is quite possible they would spend days on end building new worlds in this interactive game.

Last weekend, they built a model of the Manchester-Boston Regional Airport in New Hampshire, complete with a baggage claim area and several aircraft parked at gates, getting ready for take-off. Like many parents, Erica and I embrace the use of this game because we see so many learning opportunities for our boys.

Recently The Atlantic's Rey Junco reported on the educational benefits of games like Minecraft in the article "Beyond 'Screen Time:' What Minecraft Teaches Kids." Junco encouraged teachers to incorporate the game into their classrooms, with suggestions that included:

In a recent Scientific American article "Fact or Fiction?: Video Games Are the Future of Education," author Elena Malykhina reported on the increasing use by teachers and parents of educational video games as a learning tool for children.

"If educational video games are well executed, they can provide a strong framework for inquiry and project-based learning," says Alan Gershenfeld, co-founder and president of E-Line Media, a publisher of computer and video games and a founding industry fellow at Arizona State University's Center for Games and Impact.

Over the last few years, video games have started to become a regular fixture in classrooms across America. The movement is known to educators simply as gaming, and it is considered by many to be one of the next great disrupters that is changing the landscape of education in our schools.

The online blog Mind/Shift has published and entire set of articles on the topic in their Guide to Games and Learning. Their articles range from explaining what gaming is, the do's and don'ts for selecting games and integrating them into classroom instruction at various ages, and what the research is already telling us about gaming as a classroom tool.

In Mind/Shift's article, "Benefits of Gaming: What Research Shows," author Jordan Shapiro referenced a recent American Psychological Association study that identified four types of learning skills that are positively impacted from video games on the kids who play them: cognitive, motivational, emotional and social. Shapiro reminded teachers that these types of skills go far beyond the 20th century view of a teacher's role as one who simply transmits content and facts.

In a follow-up article, Shapiro cited research that was completed by GlassLab (the Games and Learning Assessment Lab), which concluded some significant gains were made by students who used gaming in the classroom in their cognitive competencies and their abilities to generate simulations of real-world experiences.

The evidence available to us today is telling us overwhelmingly that gaming can have a positive impact on student learning. Principals, are your school policies conducive to gaming? Do you have the resources to support gaming in your schools? Teachers, are you ready to start a gaming initiative in your classroom? It could be as simple as starting a game of Minecraft.

I know that my boys, Brady and Cameron, would welcome the opportunity to use their video game skills in their classrooms.