How hip-hop culture can power up student self-worth, engagement 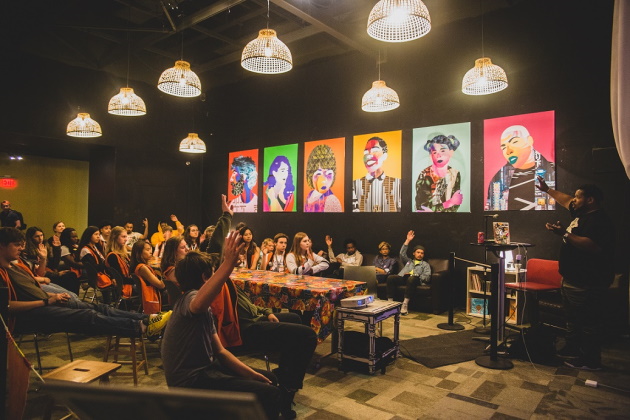 Students learn about the historic roots of hip-hop. Photo courtesy of Hip Hop for Change

Hip Hop for Change has empowered and educated students remotely these past few months as school administrators have sought out the nonprofit to help motivate students as they tire of online learning. Even in the best of times, whether they’re making beats, DJing, rapping, breakdancing or doing graffiti art — kids have a lot of fun learning with hip-hop.

“When education so often feels like shoving things down kids’ throats, hip-hop is really a no-brainer,” says Khafre Jay, founder and executive director of San Francisco Bay Area-based Hip Hop for Change (HH4C), which has taught over 21,000 students in K-12 schools. “One reason we’ve been so successful is that kids want this, they’re hungry for this.”

The COVID-19 crisis inspired the organization to expand online programming; now, more schools and parents around the country and world can benefit.

From getting kids excited about geometry by breakdancing shapes on the floor to fostering respect for nature by sampling sounds to make beats from the forest that students incorporate into rap songs, HH4C has helped educators enliven learning through hip-hop.

Across subject matter, teachers can incorporate expressive elements of hip-hop culture into lesson planning or offer it as an option; for example, allowing students to decide whether to present their ideas and newly learned knowledge in a report, PowerPoint or as a rap. Kids remember concepts and theories better when the learning process is exciting and involves them, observes Jay.

Yet, while using hip-hop to help students digest and retain subject matter learning is an awesome tool, it’s but a fraction of the larger potential for youth empowerment with hip-hop culture. 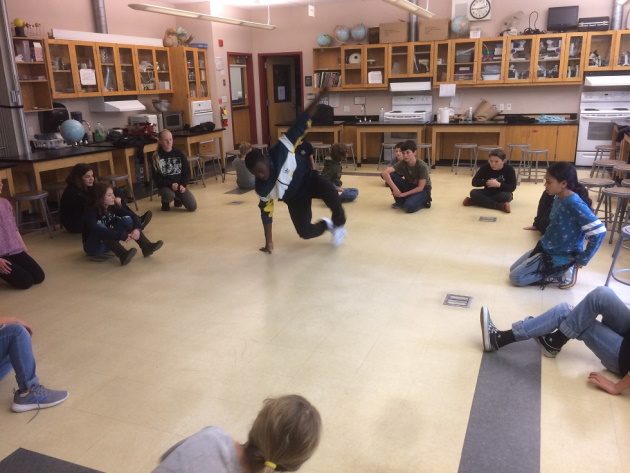 Beyond the violence, controlling the narratives of hip-hop

One may question using a genre known for lyrics depicting drug abuse, violence and criminal behavior in the classroom. Jay clarifies this understandable confusion, explaining that between 80-90% of popular hip-hop music and videos come from major media corporations that are focused on profit, not empowerment.

As a young Black teen growing up in Hunters Point, San Francisco, Jay says he bought into that mainstream narrative and got successful rapping about clothes, cars and girls. Yet when he started to change his narrative to the things that concerned him in his community, like environmental injustice and police brutality, his career disappeared. Suddenly he wasn’t getting booked at the big, paying shows.

“We have a lot of great hip-hop out there, a lot of great leaders and great narratives but unfortunately they don't have the money behind them to look as common as the pathology does,” says Jay, who founded HH4C to provide a platform for artists creating hip-hop with progressive narratives.

“I’m not for censorship. I don't want to hide the dirtiness nor do I want kids NOT to have gangster rap,” he adds. “But I want them to have granola rap, hippie rap, eco rap, heavy metal rap and all the other rap that makes up the entire body of our human experience.”

Kids need the opportunity to ingest every narrative so they can find out who they want to be. He talks about how important it is to control the ideas that our kids have access to because if they constantly see only one or two avenues for themselves, that’s all they’re going to know. 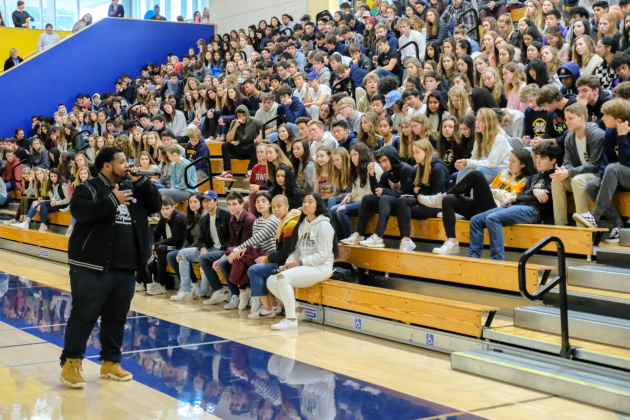 Director of Education Programs Marlon Richardson, aka Unlearn the World, at a schoolwide assembly. Photo by Pete Zivkov

HH4C’s Theory of Hip Hop Evolution, Music and Culture Program validates and connects youth back to their rich cultural roots and gives them a means to express the challenges they’re dealing with personally and collectively.

Jay illustrates this with a story of a girl at a predominantly Black and Latino high school.

Circling around the classroom, he noticed a girl who wasn't writing her raps and approached her.

She said to him, “I don't know what to rap about. I don’t want to rap about all the stuff I see on TV, violence and whatnot.” Khafre laughed and reiterated the lecture he’s already made on hip-hop being all about expressing whatever you want. He then shared his personal experience, what he used to rap about and how it didn't help him, and what he raps about now.

Next thing he knows, the girl is up rapping in front of the class, “I'm a queen… no man gonna tell me nothin, the boys don’t respect me and I'm gonna make it, no matter what …”

She wanted to get in front of the class again and again.

“I like to get people to understand there's a nugget of self-worth, self-efficacy and self-esteem, that’s inherently part of the vehicle of hip-hop,” he emphasizes.

Hip-hop education is for kids of all races. When HH4C artist educators go into a predominantly white school, they’re able to challenge the narrow representation of Black people and hip-hop culture perpetuated by the music industry and media. These kids then get an interactive experience of real hip-hop culture rooted in peace, love, unity and having fun. 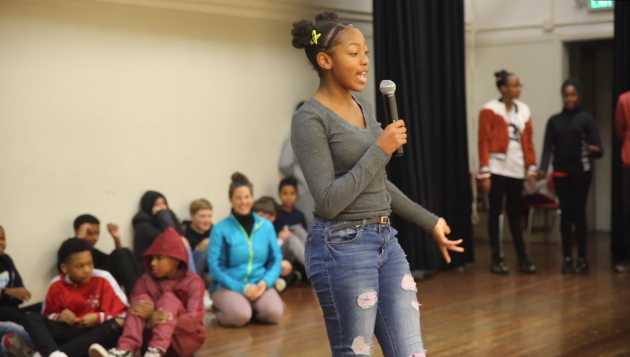 A student performs a rap she wrote for classmates. Photo courtesy of Hip Hop for Change

The organization doesn’t stop with K-12 education. Along with employing grassroots fundraisers to hit the streets and educate people throughout the Bay Area, HH4C connects aspiring young artists with hip-hop veterans.

“One of the most powerful and inspirational aspects of this program is that we’re providing a space for mentorship to occur,” says Director of Education Programs Marlon Richardson, aka Unlearn the World. “Often we’re in the lives of these kids throughout the course of their academic career starting in grade school or high school. That can then ideally create a pathway for them to be employed either as artists or educators.”

Instead of learning from the TV, Jay speaks to how it’s critical for kids to have access to their culture as well as the elders in the community who’ve been through it and can show them how hip hop can enrich their lives with a sense of positive self-identity. From there, they may choose to do gangsta rap or pursue biochemistry.

“These kids need to know all they're capable of doing with their culture,” he concludes. “If these kids can even have a concept in their mind that hip-hop can take them to Carnegie Hall instead of just knowing that when they're doing classical — we’ve succeeded.”