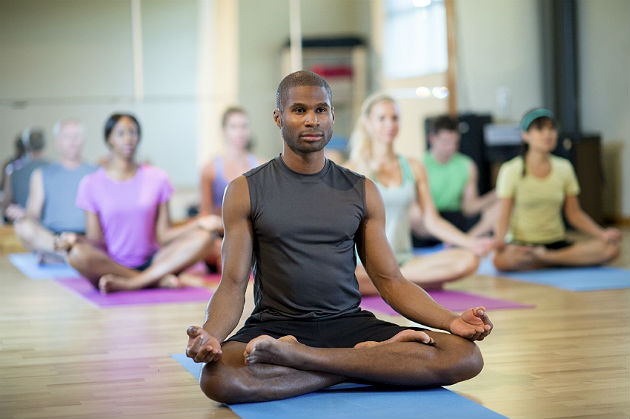 Most people hiring a fitness coach aren’t thinking about improving their posture. Maybe they should be.

Research-based literature over the last decade increasingly shows how much posture affects one’s mood, outlook on life, confidence level, and physical health. Techniques from the yoga world can help fitness professionals incorporate spinal alignment techniques into the packages they offer clients — which may even boost clients’ motivation to reach their fitness goals.

Understanding the role of spinal curves in proper alignment

Postural habits generally go unnoticed until the back or neck begins to hurt. But that is only the beginning. The common sore back is far from the only ailment associated with poor spinal alignment — chronic headaches, knee and wrist problems, and even digestive issues can often be traced to poor posture.

Often, people seek to fight against bad posture by trying to force the back into a complete straight line. They’ll overcompensate by tensing the back, sticking out the chest and, at times, exaggerating the lower back curve. Yet optimal alignment considers the spine’s natural curve.

In numerous traditional cultures, goods were frequently carried on the head and often for great distances. People were wisely taking advantage of the natural strength and shock absorbing qualities of the spine. Biomechanically, the spine, with its natural curves, is 10 times more resistant than the straightened back, explains yoga therapist David McAmmond in his book, “Yoga Therapy for Backs.”

Yet for many of us, our spinal curves are in jeopardy — largely due to our modern sedentary lifestyle characterized by seated activities that promote unhealthy posture. Long hours on the computer and behind the wheel commuting slowly eliminate the natural S-shape of the spine. The head juts forward, shoulders slouch, and the lower back curves flatten.

Since inactivity is the main cause of these problems, the obvious solution is movement. Who is more aware of the detrimental effects lack of exercise racks on the human body than sports and fitness professionals?

Indeed, physical activity is key in the reduction and prevention of most back pain; however, it is important to exercise caution because it can also exacerbate existent problems or even cause them. Obviously, if someone finds mobility difficult or is experiencing intense pain, they should be directed to seek a diagnosis from a qualified medical professional before taking up or continuing any fitness program.

Barring the above, it’s important to observe how students are holding their backs when they exercise so they are not reinforcing self-defeating patterns.

While standing, check that the outer edges of the feet are parallel and the knees unlocked. The pelvis should be positioned right above the legs neither tilted forward of back. From the side, you should be able to draw an imaginary vertical line from the student’s ear to the shoulder joint down through the center of the hip, knee, and ankle, writes physical therapist Judith Hanson Lasater.

Encourage clients to practicing this one yoga pose — the standing mountain posture — at least once daily will make a difference when they take on other activities. “Standing well reduces strain on the joints, ligaments, and muscles, especially on those of the spinal column and lower extremities,” says Hanson Lasater. “When this pose is practiced well, the body is prepared for almost all daily movement: standing, sitting, walking, and running.”

As the body moves from standing upright, one needs to remain aware of how certain positions affect the vertebrae. The standing and seated forward bends, common in nearly all yoga routines, fitness programs and athletic warmups, are listed as basic yoga postures that carry a risk of back injury if not performed properly, per McAmmond.

Problems arise when flexion occurs in the lumbar spine instead of the hip joint because the pelvis is restricted from rotating forward, usually due to short or tight hamstrings.

“Excessive lumbar flexion is usually associated with over-stretched lower back ligaments, which leads to vertebral destabilization and disc herniation,” he explains.

Bending the knees during forward bends and sitting on a prop to lift the hips off the floor for the seated version are two remedies that help protect the lower back while one concurrently addresses the root issue, the hamstrings. Supported stretches held for up to five minutes are what’s necessary to lengthen these strong muscles, says McAmmond.

Relaxing into better posture as an initial step

Many people may find it challenging to attain proper alignment while standing, much less while stretching or working out. In these cases, the first step needs to be working toward it — or, perhaps better put, relaxing toward it.

According to Brigitte Longueville, an international yoga teacher trainer with extensive study in therapeutic yoga, the process begins with reducing the rigidity of large overworked surface muscles, namely the pectoralis, trapezius and deltoids. With constant hunching of the shoulders the pecs become short and tight, reducing lung capacity and circulation to the arms and head.

Practicing restorative and gentle yoga postures is an ideal way to begin undoing this accumulated muscular tension. The therapeutic use of props that help position the back in (or close to) its optimal alignment while in a relaxed state can help reeducate the body.

Just by facilitating relaxation and lengthening in the pectoralis muscles you can set a positive domino effect into motion — the shoulders can begin to roll back, chest is able to expand, breathing becomes less labored, and the neck lengthens.

Restoring the spine to its natural state takes time, patience and constant vigilance. For people fortunate enough to still have spinal curves still in place, preserving them should take priority over following the latest fitness fads. As professionals in the field, we need to lead the way.