Will there be teachers’ strikes over classroom teaching this fall? 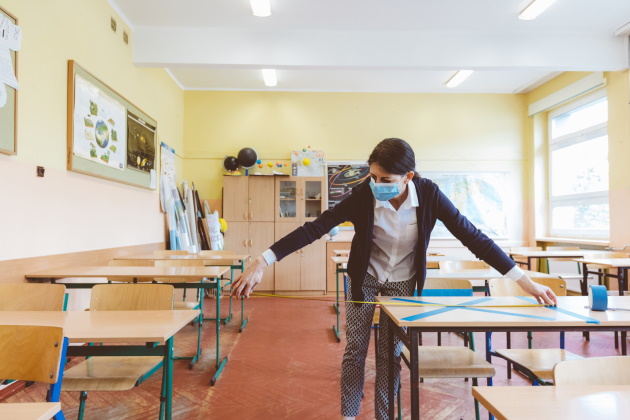 As schools have been reopening the past few weeks, I’ve been following teachers’ responses to classroom vs. online teaching. There seems to be growing unease among teachers about opening classrooms in the midst of the coronavirus.

But education authorities — certainly the federal government, but also many state and city governments — have not shown the same reluctance. Some are determined to open — or have already opened — with relatively minimal precautions.

Unless these differences are resolved, the coming school year may be absorbed in controversies, including teacher strikes and possible punitive firings. Equally daunting, students and their parents may have to choose between a significantly increased chance of their child contracting a COVID-19 infection or undergoing an inadequately planned and administered remote learning regimen — if remote learning is even available.

In early July 2020, as coronavirus deaths began trending upward again, the most populous states began rolling back reopening efforts. But, among teachers, opposition to reopening the schools began at least a month earlier. By late August, a clear majority of 62% of parents were also strongly opposed to reopening schools.

In August, opposition to schools reopening has also increasingly intermeshed with other progressive efforts, making a satisfactory resolution more difficult to achieve. The Journey for Justice, for instance, a 501(c)(4) affiliate of the Center for Popular Democracy, communicated to the Trump administration 15 demands for “a safe and equitable reopening,” most of them unlikely to be implemented during the current administration, such as “fully functioning air-conditioning and ventilation units, free laptops and internet access for every student.”

The demands have further broadened over time and now include the “elimination of police in schools,” which would not normally be a federal concern one way or the other. Like so much else, the decision to reopen schools has become entangled in polarized and polarizing political argument.

What Would It Take to Safely Reopen?

There are a couple of broad, underlying problems that make finding a satisfactory solution difficult. First is the extraordinary cost of a safe reopening. The Council of Chief State School Officers, comprised of the heads of state education departments, has concluded that safely reopening schools would take about $245 billion, most of which would have to come from the federal government.

Senate Republicans, whose agreement would be essential if such funding were to pass, have instead offered around $70 billion. The $245 billion figure is nearly the total for all COVID-19-related funding recently demanded by the Democratic-led House of Representatives.

Another obstacle is the relationship between government and teachers’ groups, especially unions. Even in states with Democratic governors and political majorities, relations haven’t been especially harmonious since COVID began and have worsened over the summer. In California, both major teachers’ unions opposed Gov. Gavin Newsom’s idea of reopening schools this past summer and noted at the time they were also opposed to returning to classrooms in the fall.

Other teachers’ groups in other states have similarly opposed reopening without unlikely and expensive implementations of various protective practices and procedures. New York City teachers, for example, announced in late August that they were "prepared to strike" unless demands were met. In one Phoenix area school district, nearly half the teachers applied for leaves of absence beginning on the first day of school, prompting administrators to reverse the reopening decision.

Where Argument Ends and Jeopardy Begins

From teachers’ perspective, one of the intractable arguments over reopening has to do with the “essential” nature of childhood education. As the CDC has repeatedly argued, if schools remain closed, students, and particularly minority students, may suffer what is essentially an irremediable harm. Some have argued that teachers, like medical workers, should just suck it up and "do their jobs."

But, teachers have responded, these two essential occupations occur in very different environments, making teaching far more dangerous. First, nurses and doctors are bravely performing in the midst of COVID-19, but they’re doing so within medical facilities designed to provide a maximum amount of protection and with a largely compliant adult patent population.

Teachers, on the contrary, are serving a population of children — most teachers will tell you that getting kids to walk instead of running in school hallways is an ongoing job; getting them to wear a mask for six hours a day just isn’t realistic. They’re expected to do so in physical environments that make safe distancing impossible. The Fresno Teachers Association’s Jon Bath commented, “Can you imagine being with 40 kids in a room that’s 20 feet square? As a teacher, you’re going to get it.”

I’m writing this in a week when many schools would normally open for the new school year. Some are, and more may — teachers are being threatened with unemployment in an environment where jobs are particularly scarce. But there remains a lot of uncertainty and some recent medical data regarding the prevalence of children as COVID-19 carriers suggests the danger to teachers is even greater than was earlier thought. While children do not generally become as ill if they contract the disease, in various state tests they made up between 3.2 and 17.8% of the total U.S. COVID-19-infected population. The Kaiser Family Foundation has estimated that 24% of teachers are at risk of serious COVID-19-related illness if they return to their classrooms.

Teachers and their unions face a difficult choice — to strike (or do so by another name), risking the permanent loss of their jobs or to work in a particularly dangerous, possibly fatal environment.