Where it all began: Wuhan Airport reopens after lockdown 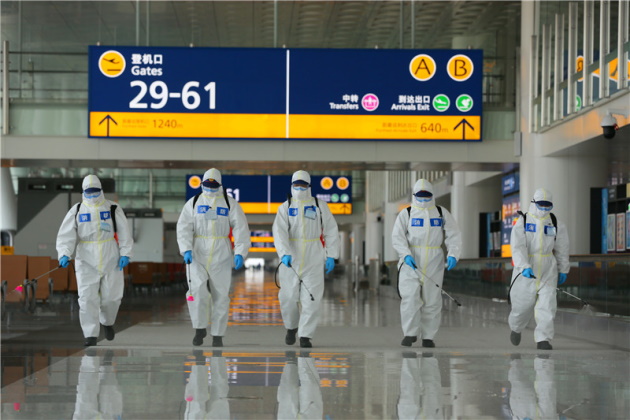 COVID-19 emerged in Wuhan, a city in the Hubei Province of China. As the true scale of the virus and its potential was realized, the city’s Tianhe International Airport was one of the first to close as authorities sought to limit its spread.

Now, 11 weeks after it was closed down, the airport has reopened to flights as China begins to see light at the end of the darkness.

The first flight to arrive at Wuhan following the airport’s reopening was Xiamen Air’s MF8095 from Hangzhou shortly after 7 a.m. on the morning of April 8.

The airport will initially see a reduced schedule as carriers begin to ramp up operations and travel restrictions are lifted.

Crowds seen outside the terminal on the day of reopening represented the large number of people stranded in the city hoping to travel home. Many of the passengers on the first flights out of Wuhan were medical workers who had travelled to the source of the COVID-19 outbreak to treat the large numbers of people suffering from the virus. Now, after months in lockdown, the number of new cases has reached a level where it appears the crisis — in China at least — is almost over.

However, it is thought demand for air travel both within China and worldwide will be severely hampered for many months to come.

One of the major challenges facing Tianhe International before it could be reopened was the making it safe for use again.

Beginning on April 3, all 570,000 square meters of the airport’s Terminal 3 were disinfected by a team of over 160 firefighters drafted in to make the airport ready for passengers. While the virus is unlikely to have survived on any surface for the 76 days since the airport closed, it is a necessary process to give the public peace of mind when reopening an airport and relaxing social restrictions.

The team, which was wearing protective clothing and carrying tanks of disinfectant, set about spraying every surface, seating area, trolley and public area in the building.

The airport also prepared key staff for returning to work and tested the airport and terminal’s systems ahead of the first passengers.

Hope for the Aviation Industry

Lagardère, the group which runs Terminal 3 at Wuhan, told TR Business, “The reopening is proof that everything which closed and disappeared will reopen and come back."

It is a sign for airports across China and the rest of the world that the challenging period being faced now also comes with a period in which rebuilding can take place.

Those which have closed down or consolidated operations into fewer terminals will be looking at Wuhan and China for an indication on how to tackle reopening or ramping up passenger operations once the virus passes in their own locality.

Wuhan Tianhe International is a hub for Air China, China Eastern Airlines and China Southern Airlines. At the time of its closure, it had long-haul links to Dubai, London, Moscow, Paris, Rome, San Francisco and Sydney. There were 28 flights from Wuhan Airport on the first day of its reopening.