What’s the difference between 2D drawing, 3D modeling and BIM? 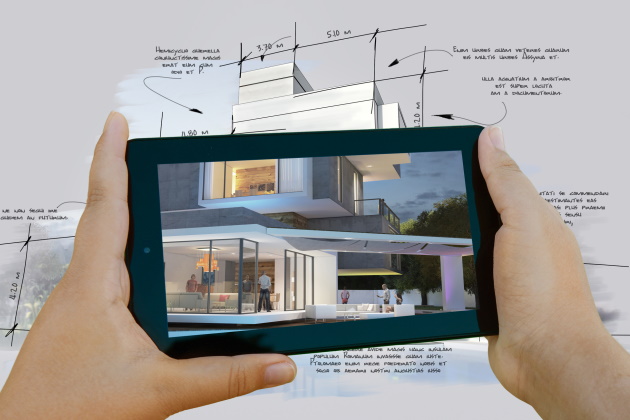 From cave paintings to complex live 3D models, humans have come a long way when it comes to drawing and visual representation of objects. Architects, engineers, and construction (AEC) professionals can now do everything on a single computer; T-squares and rulers are not as popular as before.

Computer-aided 2D design, 3D modeling, and BIM may all seem similar to a layman, but their differences are far more prevalent in reality. This article aims to explore the use of these three techniques, as well as their advantages and disadvantages.

Before computer-aided design (CAD) came to be in the '50s, architects and designers everywhere had to use the pen-and-paper method. However, the goal was always the same — to create a true-to-life graphic representation of an object. Besides allowing us to capture existing buildings, drawings helped us conceptualize, plan, and execute them.

Of course, CAD was a game-changer. Many architects, engineers, and designers were quick to adopt it, as it gave them new possibilities that they didn't have before. While drawing by hand has its perks, such as unlimited creativity, CAD has simplified and accelerated the process. What's more, today's software can do unbelievable things and has much fewer limitations than before.

Artists and graphic designers today use programs like Adobe Illustrator, Procreate, Sketch, and Autodesk Sketchbook. They provide a wide artists' toolset, including a range of different brushes for more realistic textures.

On the other hand, AutoCAD is by far the most commonly used software in the AEC industries. Other programs, such as SolidWorks, FreeCAD, and LibreCAD, but none of them can even come close to matching AutoCAD's popularity. What's more, Autodesk has been consistently evolving over time, now offering a mobile version, 14 different language options, dozens of other AutoCAD expansions, and other useful software for AEC experts.

The emergence of 3D modeling has taken visualization to the next level. We can now create more realistic, dynamic, and accurate object depictions than ever. Apart from buildings and their systems, 3D modeling can also be used to replicate furniture, vehicles, even human organs, neurons, and chemical structures. The best part is — 3D modeling made 3D printing possible.

However, 3D modeling may have had the most significant influence on the AEC industries. It has changed the way we conceptualize buildings and structures forever, allowing us to predict the end-product. It's never been easier to manage every detail, which is crucial for large-scale construction projects.

The most popular 3D modeling software includes Modo, Blender, Rhino 3D, SketchUp, and, unsurprisingly, AutoCAD. In the late 90s, Autodesk came out with AutoCAD Architecture (ACA), which had the added option of 3D modeling.

Besides that, ACA today offers an incredible architectural toolset, which includes over 8,000 intelligent styles and objects. If you can't decide which is more suitable for your needs, we suggest you consult this AutoCAD Architecture vs. AutoCAD breakdown.

Thanks to 3D design software like ACA, we can now design using realistic objects instead of plain lines and circles. What's more, 3D modeling has brought about efficiency. The model can quickly adapt to every modification you make, eliminating all the tedious, mundane, and repetitive tasks involved with it.

Unlike 2D drawing and 3D modeling, which amateurs and professionals of various industries use, BIM is specific to AEC experts. In addition, while we use drawing and modeling primarily in the design phase, BIM is a process that follows the full life cycle of a building. That also includes maintenance, renovation, and demolition.

BIM uses 3D modeling for visualization, but it's much more than that. The model is the base, always providing up-to-date and accurate data for each sector to go by. Aside from improving communication, BIM also helps with time and budget management. All in all, the goal of BIM is to increase workflow efficiency as much as possible.

Once again, Autodesk has come on top, this time with its top-notch BIM software, Revit. Other popular programs include VectorWorks, ArchiCAD, Tekla Structures, etc. Software like Revit is the basis of BIM, allowing you to create and control the whole project from a single computer.

What's more, as technology is evolving, so is BIM software. With the implementation ofAI and machine learning, it will most likely become an even more powerful tool. In the future, we can expect most tasks to be automated — from simple calculations to design itself. What's more, fed with information on past projects, AI can analyze and easily detect errors, discrepancies, and potential accidents in the current model.

Despite the common misconception, AutoCAD is not a BIM software, and neither is AutoCAD Architecture. Autodesk has other programs intended for BIM — Revit and, as of recently — the Autodesk AEC Collection. However, they have made them interoperable, so you might be able to import some AutoCAD elements to Revit and use them together.

Conclusion — Which One Should You Choose?

While they share the same principle, these three techniques are quite different in almost every sense of that word. Today, 2D modeling is used primarily by artists and engineers, whereas 3D modeling has a wide spectrum of potential uses — from sculpting to 3D printing. On the other hand, BIM is an all-encompassing tool designed specifically for AEC projects.

Thus, if you want to create a simple initial draft, 2D drawing is the fastest and most effective choice. However, 3D modeling software will let you visualize the structure or object in its final form and help you design more intelligently. Finally, for complex construction projects and maximum efficiency throughout the whole building process, you should use BIM software.

Anna Liza Montenegro is a trained architect and an accomplished marketing professional in the architecture, engineering, and construction (AEC) industry; she possesses both strategic and execution of marketing initiatives, go-to-market plans, and execute product launches.

At Microsol Resources, she develops the marketing strategy, brand management, digital marketing, and other demand generation activities for Microsol’s strategic partnerships with Autodesk, McNeel Rhino, Bluebeam, Enscape, Chaos Group V-Ray, Panzura, Ideate Software, FenestraPro, and other partners. When not marketing, she loves spending time with her kids, traveling, and summers in Maine.