What you need to know about diabetes in cats 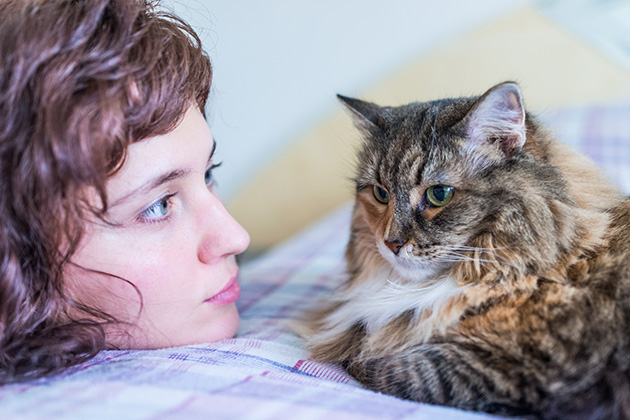 It is vital for cats and other mammals to maintain a steady level of blood sugar (glucose), as glucose plays an important role in many processes in their bodies. Diabetes mellitus is a disease that results in high blood glucose levels and is a common disease in cats.

This signals glucose to be released into the blood stream and brings blood sugar levels back up to normal. Thus, diabetes occurs when the body is unable to produce enough insulin to control blood glucose levels or the body cells are not responsive to the insulin that is produced.

In cats, the most common type of diabetes closely resembles type II diabetes in humans. Type 2 diabetes occurs when cells in the body become insulin resistant. In other words, cells become less responsive to insulin and do not take up blood glucose as readily.

This is very different from Type 1 diabetes, in which the body destroys pancreatic cells and not enough insulin can be produced to control blood glucose levels. Diabetes in dogs typically resembles Type 1 diabetes in humans.

What Causes Diabetes in Cats?

There are multiple factors that can increase the risk of diabetes in cats including age, breed, and body weight. Of these factors, obesity is the most significant, with overweight cats having a greater risk of developing the disease compared to cats with an ideal body condition [1].

Contrary to popular belief, various studies have found that diet type (i.e. kibble vs. wet food) does not impact the prevalence of obesity in cats [2, 3]. Rather, an inactive lifestyle and excessive caloric intake remain the most significant risk factors for obesity in cats [4, 5].

Therefore, it is very important for pet parents to manage their cats’ calorie intake and body condition to help mitigate the risk of diabetes.

Because cats are obligate carnivores, there exists a common misconception that they should not consume carbohydrates. This has led to the suggestion that the consumption of high carbohydrate diets may increase the risk of diabetes in cats.

However, the evidence shows that healthy cats can efficiently digest and absorb carbohydrates [6]. In fact, it has been shown that the consumption of various levels of carbohydrates provided by a variety of ingredients has a minimal effect on blood glucose levels in cats [7].

Furthermore, in cats fed either a low or high carbohydrate diet, no differences in insulin levels were found [8]. These results suggest that carbohydrates do not negatively impact the insulin response or result in persistently high blood glucose levels in healthy cats.

Several studies have also been conducted to specifically evaluate the potential role of carbohydrates in the development of diabetes in cats, and all have come to similar conclusions. High carbohydrate intake is not considered a risk factor for the development of feline diabetes [9] and the greatest contributors to insulin resistance appear to be obesity [10] and increased consumption of dietary fat [11].

There are multiple methods to manage feline diabetes which include both medical and nutritional interventions. Of these management regimes, insulin therapy has proven to be the most effective method of treatment to help control blood sugar in cats [12]. However, for owners who would rather not turn to medical treatment, there are some nutritional interventions that have proven to be effective for diabetic cats.

Although the evidence shows that healthy cats can efficiently use dietary carbohydrates, diabetic cats may have difficulty doing the same [13]. Therefore, providing diabetic cats with lower levels of carbohydrates may be an effective method to slow the release of glucose into the bloodstream and help manage diabetes [13]. Several clinical studies have shown beneficial effects of feeding low carbohydrate diets to diabetic cats, with many cats going into remission [14, 15].

Though there are documented benefits to feeding a low carbohydrate diet to diabetic cats, it is important to remember that carbohydrates are not the only macronutrient that should be considered.

When dietary carbohydrate level is decreased, fat and/or protein levels must increase. This can become an issue when diets with low levels of carbohydrates have high amounts of fat, which has been shown to contribute to insulin resistance [11].

However, a high protein, low fat, and low carbohydrate diet may not be the ideal choice either for a diabetic cat. In older cats especially, diabetes and kidney disease are issues that can often both be present.

In these cases, a high protein diet would not be beneficial because they are also typically high in phosphorus, which is not recommended for cats with kidney disease. Therefore, dietary management of cats with diabetes must consider all health conditions and should be discussed with your veterinarian.

Although low-carbohydrate diets have proven to be beneficial for some diabetic cats, controlled blood sugar and, in some cases, remission can also be achieved by feeding higher carbohydrate diets designed to manage the disease [6]. Rather than containing high amounts of easily absorbed simple sugars, these specially formulated diets include complex carbohydrates and dietary fibre to help manage both obesity and glucose levels in cats [6].

Overall, there are multiple factors that can lead to the development of diabetes in cats. To reduce the risk of the development of the disease, it is most important to promote physical activity and manage caloric intake to help maintain an ideal body weight. For cats with diabetes, there are multiple methods to help manage the disease that should be discussed with your veterinarian.

Natalie Asaro, Nutrition Assistant at Petcurean, received both her BSc in Honours Biological Science and MSc in Companion Animal Nutrition from the University of Guelph.

Dr. Jennifer Adolphe, Senior Nutritionist at Petcurean, graduated with a rare and coveted Ph.D. in companion animal nutrition from the University of Saskatchewan.