What to know about the best ammo for hunting thick-skinned, dangerous game 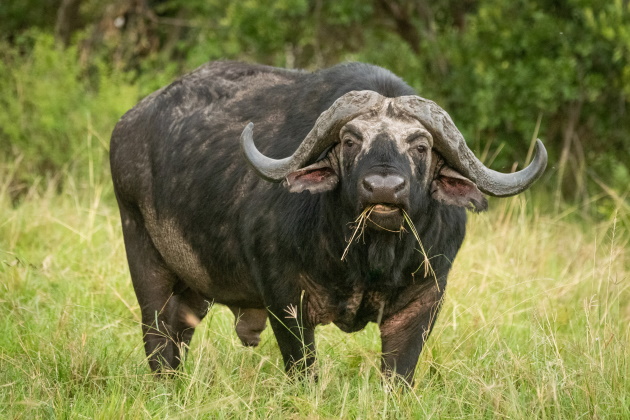 Bullet selection is always an important consideration when preparing for a hunt. However, choosing the appropriate bullet literally becomes a matter of life and death if you’ll be hunting dangerous game like cape buffalo.

The good news is that most of the big ammunition companies now offer several different lines of ammunition that are specifically designed for hunting thick-skinned, dangerous game. In particular, Nosler manufactures its Safari Ammunition line specifically for those hunters.

Before going into detail on Nosler Safari Ammunition, I’d like to provide a little bit of background on the sort of bullet performance hunters pursuing thick-skinned dangerous game (cape buffalo in particular) really need while they’re afield.

You’ve probably heard it before, but it bears repeating here: cape buffalo are really, really big and really, really tough. As a point of reference, a big bull can weigh twice as much as a mature bull elk.

Buffalo have thick hides, dense muscles, and heavy bones that are known for defeating lightly constructed bullets. Since buffalo are often encountered at close range and in thick cover, the margin for error is very small and more than a few hunters have lost their lives (or spent time in a hospital) as a result of poor bullet performance.

With this in mind, heavy for caliber, controlled-expansion bullets are essential for hunting buffalo. In short, you want a bullet that will reliably expand to a certain point in order to cause lots of tissue damage, but not expand so much that it won’t reliably penetrate deep enough to reach the vitals.

Since those shooting angles minimize the distance a bullet must penetrate to reach the vitals, expanding bullets are better choices because they make a larger wound channel, cause more damage to the internal organs of the buffalo, and are less likely to exit and unintentionally wound another buffalo in the herd than non-expanding bullets.

So, most dangerous game hunters need a mix of good quality controlled-expansion bullets and non-expanding solids that shoot to the same point of impact. Fortunately, product lines like Barnes’ VOR-TX Safari, Federal Premium’s Safari Cape-Shok, Hornady’s Dangerous Game Series, and Nosler’s Safari Ammunition are all designed to provide that sort of performance.

Nosler worked in partnership with Norma Precision to manufacture its Safari Ammunition. This ammo pairs their legendary Partition Bullet with Nosler Safari Solid bullets of the same weight that also shoot to the same point of impact.

On one hand, the Partition delivers rapid and violent, yet controlled expansion that is deadly on all manner of game from impala and whitetail deer all the way up to moose and eland. It’s also a good choice for initial shots on buffalo.

On the other hand, the Nosler Solid bullets are tough, flat-nosed, homogenous projectiles that can be relied upon for deep, straight-line penetration through thick muscles and heavy bones of even the largest creatures. These projectiles are wonderful choices for follow-up shots on buffalo as well as for shots on smaller game like steenbok and duiker to minimize damage to the hides.

So, if you're looking for the right ammo to take on safari with dangerous game on the menu, then you should really consider using Nosler Safari Ammunition. This is some versatile rifle ammunition that you can depend on when the chips are down.