Urban challenge: What should be done about gentrification? 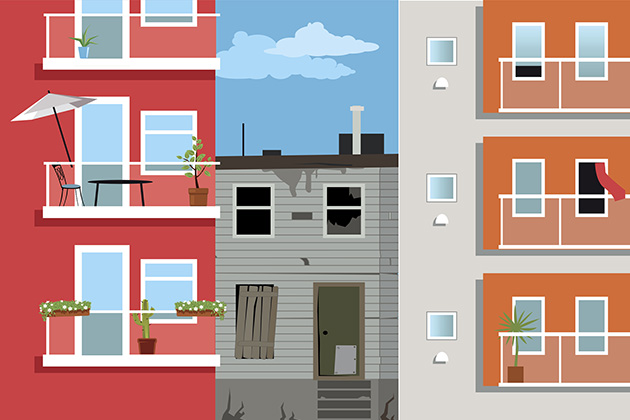 Gentrification is the process in which an influx of wealthy residents into an urban district causes rents to rise and the neighborhood to be reshaped in line with middle-class (usually white) characteristics. And it's becoming an growing headache for policymakers and the mayors of some of America's hippest cities.

The sense that long-standing locals are "losing a neighborhood" makes this a highly emotive issue to deal with. But others argue that anti-gentrification protestors are missing the real point. Let's look at how big a role gentrification plays in U.S. cities and how its negative consequences can be managed.

Victims of their own success

In many ways, gentrification is the flip side of the first urban challenge I discussed last time — out-of-control suburbanization. It hits hardest in cities that have revived their once-undesirable inner cities so successfully that they have become victims of their own success.

Well meaning councils build transportation infrastructure and public space, and before you know it, artisan coffee shops, unaffordable farmers markets and the high watermark of gentrification — Whole Foods stores — are on every street corner.

But gentrification may be a more complex process than these landmarks suggest.

The philosophy of urbanist Jane Jacobs, who promoted reurbanization in areas like her own Greenwich Village, has been followed so enthusiastically that now only the most affluent can afford to rent or buy in her former haunt. However, Jacobs was ambivalent on the question of gentrification.

She argued that "good" gentrification can be a heartening process of neighborhood upgrading where tired buildings are renewed and "new blood" brings more disposable income. Indeed, one tell-tale sign of gentrification is falling poverty rates. But she also acknowledges the "dark side" of late-stage gentrification, which saps the streets of their soul.

In the U.S., critics of gentrification argue that the longtime poster children of gentrification — New York, Portland (Oregon) and San Francisco — are now being followed by a new cohort including Minneapolis, Nashville and Portland (the other one in Maine).

These critics usually use measures of racial composition, educational attainment and rising incomes to detect these patterns. Teachers, artists and minorities are suddenly finding themselves priced out of their newly modish areas. In many areas, we are in fact seeing the "suburbanization of poverty" as low-income communities leave central areas.

In the U.S., these accusations have a clear racial dimension. Film director Spike Lee has been one of the most prominent to make this point by asking, "Why does it take an influx of white New Yorkers in the South Bronx, in Harlem, in Bed Stuy, in Crown Heights for the facilities to get better?"

But is the "G-word" overhyped by media content created by middle-class journalists who overhwhelmingly live in cities? A report by Governing magazine found that gentrification is certainly a problem in selected "star cities," where it has accelerated as Americans rediscover a taste for urban lifestyles.

However, on a nationwide level it is still rare — covering only 8 percent of all neighborhoods since 2000. Some, quite frankly, have little time for complaints of gentrification, arguing that they distract from more pressing problems of concentrated poverty in failing U.S. urban districts, which are leaking population and filled with empty lots and burnt-out buildings.

Regardless of how widespread the phenomenon is, mayors need to find acceptable ways of nurturing a neighborhood's vitality while treating long-time residents as valuable assets to be retained rather than displaced.

Given there is little appetite in the U.S. for Berlin-style rent controls, this will usually mean finding space in booming districts for affordable housing. Inclusionary zoning policies, for example, offer developers perks like zoning relief for including a certain quota of low-income housing.

It has always been the case that not only economics but also smart policy can help to shape cities and their neighborhoods. In cities where the social fabric of a community is being strained, gentrification needs attention to retain a city's social diversity and equity.

But cities have an extraordinary capacity for reorganizing, renewing and accommodating shifting patterns of change, and we should only fear change where it is warranted. We should be rallying around the vaster canvas of urban inequality, rather than resenting the Starbucks on the corner.