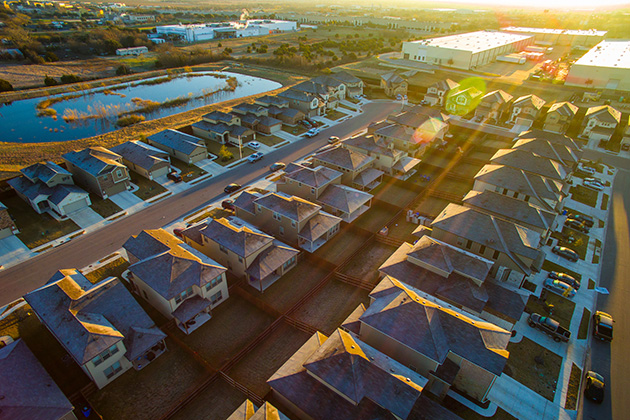 To kick off this series on U.S. cities, we looked at the rise of the metropolitan mayor. In the next few pieces, we will look at a few of the major challenges facing those mayors in shaping their cities for the demands and opportunities of the 21st century.

Here, we begin with the challenge of runaway "suburban sprawl" in U.S. cities and the uphill struggle to reverse the trend.

This is an overarching theme that informs most of the other challenges we will be discussing. That is because it relates to the very structure and blueprint of a city — what urbanist David Rudlin calls the "trellis" on which the vine of the urban fabric grows.

The U.S. may be home to economic powerhouses like New York, Los Angeles and San Francisco. But when it comes to density — the word on every urbanist's lips — it fares poorly. Out of 125 of the world's most dense cities, the most densely populated American city (LA) comes in at 90th.

American cities fall behind not only the exploding cities of the Global South such as first-placed Mumbai, but a number of European cities such as Athens (40th), Madrid (42nd), London (43rd), Barcelona (48th) and Paris (69th).

So why is the so-called "density dividend" so important? The logic behind the global pivot away from dispersed suburbs to the new policy ideal of the "compact city" is heavily influenced by the drive to make our cities "greener" and to tackle housing crises.

However, on a more immediate level, more compact, walkable cities can simply be more enjoyable places to live. There is evidence that such neighborhoods can help to foster a stronger sense of community — something our very DNA may yearn for.

When they travel abroad, Americans are charmed by the vibrant street life of compact European cities such as Paris, Berlin and Amsterdam. Yet when they come home, they abandon their own inner cities to retreat behind the front doors of their expansive suburban properties.

Jane Jacobs is perhaps best known for calling for the revival of inner-city areas in the 1960s in her classic urbanist work "The Death and Life of Great American Cities." But while her own neighborhood of Greenwich Village in New York has boomed (arguably with a little too much zeal), the rest of America took little note, and the exodus from the inner city to suburbia has continued unabated.

Her voice was drowned out by programs documenting inner-city decline and cultures of violence like "The Wire" and "The Walking Dead" that have turned Americans off urban living and reinforced the stereotype of cities as dangerous, overcrowded slums. Instead, middle-class Americans have escaped from the dirty, dangerous urban core to the winding streets and cookie-cutter houses of the surburbs sold to them by advertisers and the movie industry.

In fact, this dispersion of American families across the suburbs — reliant on their cars for the most basic of errands — has now become an ingrained part of the "American way of life," as recounted in the somewhat alarmist 2004 movie "The End of Suburbia." While their warnings of "peak oil" have been largely discredited, the core of their warnings over sustainability still stand.

There is now a growing recognition that if we are to build more sustainable cities and maintain quality of life, we will have to look back to preautomobile cities for inspiration, with their "close grain" urban fabrics — that is, steadily evolving neighborhoods of small, walkable blocks with a mix of retail and residential uses.

It's the urban equivalent of luxurious, high-count Egyptian cotton, making people want to linger. This movement has centered on the principles of new urbanism, which promote "human-scaled" urban design.

The Smart Growth America initiative was launched in the early 2000s to push these principles to policymakers at the state and federal level. Supported under the Obama administration, the EPA now gives out annual Smart Growth Awards to encourage anti-sprawl planning. Previous winners have included Atlanta for its Beltway path system that knits together concrete and nature, and New York for its bicycle lanes and transformation of Central Park.

There are understandable nerves over where a Donald Trump presidency will leave these programs, but the hopes are that the trend will prove resilient despite a long fight ahead for a place on the political agenda.

Sociologist Robert Putnam has linked the great tide of suburbanization in the U.S. to a breakdown in social connections in his book "Bowling Alone," where he described how formerly close-knit communities have been disrupted by the rhythms of suburban life and the rise of television.

Tired of bowling alone, disillusion with the atomized life of suburbia is beginning to set in among the "burbanites." But getting people to vote with their feet and repopulate declining urban areas is a tough ask.

As David Rudlin points out, this is partly because the ideal of "community" is envisaged differently by different people. The sort of rough-edged urban communities that New Urbanists are trying to promote bear little resemblance to the cozy suburban communities that thrive on sameness rather than difference. The latter is what has been sold to the American population throughout most of the 20th century.

The biggest challenge in reversing the trend has nothing to do with zoning or master plans, but with shifting aspirations among American people away from the love affair with suburbia toward a more appealing version of urban living.

But dislodging the idealized vision of suburban living from the heads of Americans will be no easy feat.