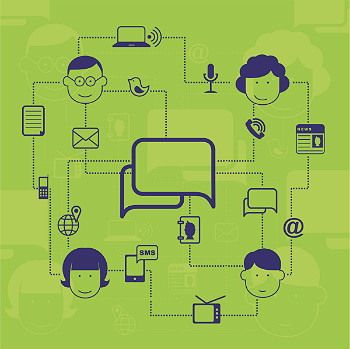 Which is better: traditional media (radio, television and print) or social media (Facebook, Twitter, YouTube, Tumblr, etc.)? Should you sink time and money into both or just one?

With a growing plethora of social media options, which are far less costly than traditional media, some of you might be questioning spending money on those pricey TV, radio and print ads to encourage business. However, using both media together, as opposed to one versus the other can move your message further and reach a larger audience.

There are more similarities than differences between traditional media and social media than you might think. Knowing what those similarities and differences are might help you plan your message and communicate it more effectively.

With either media, the message needs to be clear and simple. Once you have decided on your message, you need to decide on the channels.

For example, your company might use TV and radio advertisements to best reach your customers because these are the two traditional media that best fit your audience or customer base. Likewise, you might use Twitter and Flickr because they are the best way to reach your customers within a social media setting. Learning how your audience base (current or potential customers) uses different media and meeting them at each point will make sure they are receiving the message loud and clear.

The next similarity is that they are both measurable. Like any good media plan, results need to be measured to see how effectively you communicated your message. Within a traditional media campaign you might use foot traffic, sales data and surveys to gather results.

On the other hand, the biggest contrast between the two media is cost. When designing ads and buying time and space — not to mention billable hours if you use an advertising agency — it doesn't take long for costs to add up quickly. In contrast, most social media outlets are generally free to use. While you can outsource your social media efforts to a marketing or specialty agency for a price, keeping it in-house saves money and can be done well.

Another difference is time. A social media campaign needs to be worked every day. Monitoring what your customers are saying and doing and then responding accordingly takes time. Most experts recommend spending one hour every day with each social media outlet you utilize.

With the similarities and differences laid out, you can understand some of the basic advantages and disadvantages with traditional and social media. In Part 2, we will look at how using both together will work out to the advantage of your business and give you a better look into the psychographics of your current and potential customers.

Robin Carver does marketing and public relations work for Prock Operations, Inc. in St. James, Mo. Carver has a bachelor's degree in journalism, emphasis in advertising, from Arkansas State University and a master's degree in integrated marketing communication from Drury University.

Which delivers the better ROI?