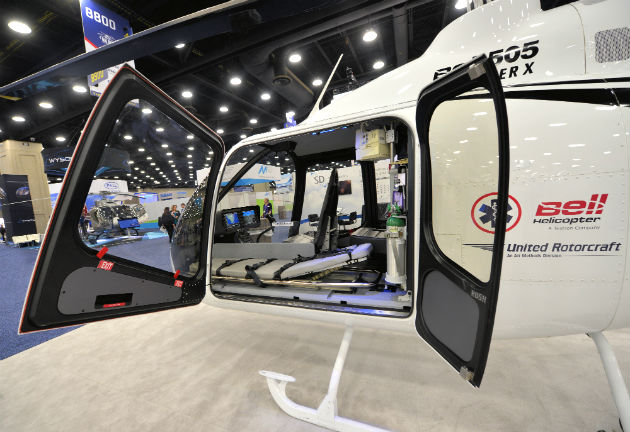 If you attended the Heli-Expo show earlier this month in Louisville, you got to see snow as well as some interesting things on the show floor — including a mock-up of a Bell 505 light single with a United Rotorcraft EMS interior. Generally, you wouldn't think a helicopter this small would be suitable for the HEMS mission, but its flat floor and big doors get if just over the goal line.

Mike Slattery, United Rotorcraft's president, told me he thinks the lightweight, low-cost interior will be popular with law enforcement and in the developing world. But because of its snug fit, he admitted it does have a few limitations for EMS: "You can't sit behind the patient's head. If you are doing airway management, that is where people prefer to sit. With this it is more of an international application so you are looking at a much different level of care."

"About a year ago we started looking at the 505, and based on its configuration we thought we could get a litter into this aircraft, so we spent some time with Bell engineering a solution that was modular and easy to install. A majority of components for this are off the shelf that were developed for other applications. That makes it very efficient from a design standard." Slattery said, adding that the cost will be "well within the economical range of someone who is operating an aircraft of this size."

The quick-change configuration is designed for operators who fly in a multi-mission environment. United Rotorcraft's objective was to use existing airframe hardpoints and keep the installation and removal to within less than 15 minutes. 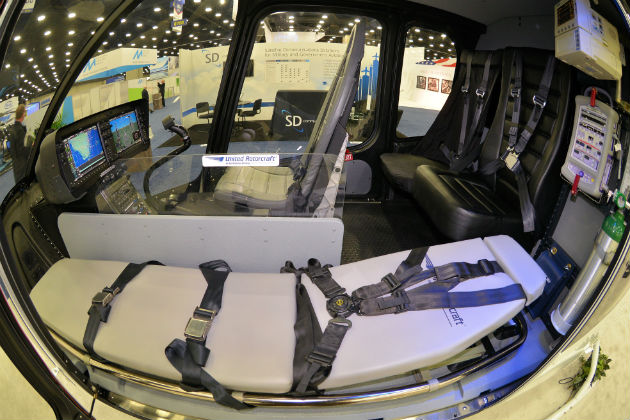 Key components of the interior include a floor-mounted litter latch system that also includes protective floor covering to keep blood from entering the airframe, a patient litter certified to FAR Part 27 and 29, and an aft equipment rack that allows you to install multiple and different types of mounts for medical equipment depending on final configuration depending on what the customer needs.

Carry-on oxygen attaches to the hard points of the aircraft that again minimizes installation and removal time. An inverter installed within the airframe would allow recharging of medical equipment via AC jacks or use the USB ports. The entire interior weighs less than 60 pounds, and there remains space for pilot, patient and two attendants.

Slattery said interest in the low-cost small helicopter interior was "overwhelming" and that United Rotorcraft hopes to sell many of them after the 505 gains certification.