The top 5 exercises you should be doing 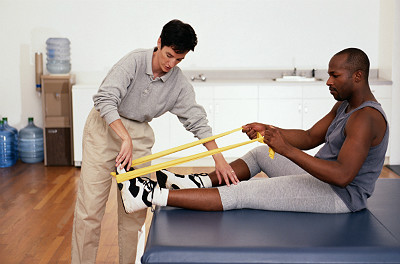 As the old saying goes, "prevention is the best medicine," and this is definitely true when it comes to the training and development of our bodies. There are so many injuries I see on a daily basis that stem from the same few causes — causes that can so easily be addressed in just a few minutes a day, before they become a problem or cause a problem somewhere else along the chain.

So, with this in mind, here are my top five exercises that everyone should be doing. The aim of these exercises is to address common muscular issues that so often lead to muscle imbalances, poor posture and subsequent pain or injury.

The clam is an exercise designed to strengthen the abductor and external rotator muscles of the hip, such as gluteus medius and minimus. This exercise is important for a number of reasons, but the most common reason I prescribe it is in knee pain rehabilitation.

If these muscles are weak, it allows the knee joint to fall inward when we are weight-bearing or landing predominantly on a single leg, as occurs when walking, running, jumping, etc. This creates a valgus force at the knee and dramatically affects the biomechanics of the knee joint.

The most frequent complaint caused by this pattern of movement is known as patellofemoral pain syndrome — a condition characterized by a vague pain at the front of the knee which often comes and goes, moves around and is usually worse when walking down hills and stairs.

The reason so many of us suffer with this weakness is because we don't move laterally. Ever. Everything we do is straight forward and occasionally backward (in the sagittal plane as it's known). These muscles specialize in moving us sideways, and as the saying goes "use it or lose it." If we don't train laterally, we can't expect our bodies to do it well when it comes to daily situations.

The clam exercise can help strengthen the muscles which are responsible for preventing the knee falling inwards like this. Here's how to do it:

The gluteus maximus is the biggest of the "glute" muscles found in the butt. Its role is to extend, abduct and externally rotate the hip. This muscle is often known as the powerhouse of the hip, and its role is vital within the gait cycle.

However, for too many of us, the Gmax doesn't work as efficiently as it should and becomes "inhibited." This basically means it doesn't fire when required.

The most common cause of Gmax inhibition is a shift in the pelvic position into an anterior tilt. What this means is that the front of the pelvis is pulled down (usually by tight hip flexors — more on this later), resulting in a forward rotation of the pelvis.

This in turn actually lengthens the Gmax and can cause it to "switch off." This places a bigger demand on the hamstrings and other, smaller bum muscles that can then become overworked, leading to injuries such as hamstring strains, lower back and sciatic pain and even calf and Achilles problems.

This exercise is really useful in order to "switch on" the Gmax:

These three movements are all of the ones that the Gmax performs and no other muscle can do all three, so it has to fire here. Repeating this movement pattern helps to re-establish the connection between the brain and the biggest of butt muscles.

The scapula stabilizers are muscles that connect the scapula (shoulder blade) to the rib cage and spine. They include little gems such as serratus anterior and the lower fibers of trapezius.

Without these muscles functioning efficiently, our scapulas move about all over the place when we move our arms. The scapula is the point onto which many muscles in the upper body attach, and we need this to be a stable base of attachment to produce the most effective and powerful movements we can.

Without strong scapula stabilizers, you put yourself at risk of injuries such as shoulder impingement and rotator cuff or labrum tears, to name just a few. The scapula stabilizers are also important in maintaining good posture, which in turn can reduce the risk of tight, aching neck and shoulder muscles, neck pain and headaches.

There are several exercises out there that are recommended to work the lower trapz and serratus, and it's hard to pick just one. But this scaption exercise has been shown to produce the combined highest muscle activation of both muscles. Here's how to do it:

There is lots of debate ongoing at the moment concerning the best exercises for promoting scapula stability, and that has made it hard to choose just one. Other ones you could try include a push-up plus and the dynamic hug exercise.

The majority of us spend a large part of our day sitting down, hunched over something like a computer, desk, steering wheel, etc. Even with the best intentions, posture often slips into that atrocious curved spine, rounded shoulders position that feels so natural. But constantly adopting this posture can cause problems due to the shortened length of the pectoralis minor muscle.

The pec minor is the smaller of the two main chest muscles (the other being pectoralis major). It attaches to ribs 3-5 and travels upwards to insert into the coracoid process — a forward-facing bony protrusion of the scapula. If shorter in length than it should be, it can effectively pull the shoulder blade forwards, creating a protracted (rounded) shoulder position.

As we learned from the hip flexors and gluteus maximus earlier, shortening on one side of the body leads to lengthening and potential inhibition on the other side. In this case, the inhibition often manifests in the scapula stabilizers (see above).

Stretching the chest muscles in a conventional way doesn't really target pec minor due to it having no attachment on the arm. Therefore moving the arm into extension, abduction and external rotation (as most chest stretches do) will have no effect. Instead you need to find a way of increasing the distance between the upper ribcage (origin) and the scapula (insertion). Cue the foam roller method:

This reverses the hunched over position we often adopt which leads to a shortened pec minor. It probably won't feel like as strong of a stretch as a hamstring stretch, but it should feel like a subtle pull and like the chest and shoulders are opening up.

Again, often due to being seated for long periods, tight hip flexors are a common issue. The rectus femoris and iliopsoas muscles at the front of the hip and thigh are in a shortened position when we are seated. If sitting for long periods, this becomes their natural resting length, and this is where the problems can start.

As discussed above, increased hip flexor tone can cause an anterior pelvic tilt. This plays havoc with the way the pelvis moves and affects other muscles such as the gluteus maximus, abdominals and hamstrings, as well as smaller, deeper hip muscles.

Injuries and pain conditions resulting from an anteriorly-tilted pelvis can range from lower back and sciatic pain, to hamstring and groin strains, and even as low as the ankle or as high as the neck and shoulder due to further compensatory biomechanical adjustments.

Stretching the hip flexors regularly throughout the day is a simple way to help reduce this natural shortening:

Stretching these muscles should be performed regularly, ideally 3-5 times, spread throughout the day to lengthen the muscle after a period of sitting.

This is by no means a definitive list of preventative exercises that any individual may want to adopt. But it is a good starting place for many people who fall into a fairly "typical" daily pattern of sitting for long periods and then undertaking sudden bursts of activity/exercise.

Spending just 10 minutes a day working on these most common imbalances, can save a lot of time (and money) on treating an injury further down the road.