The best Porsche that was never built 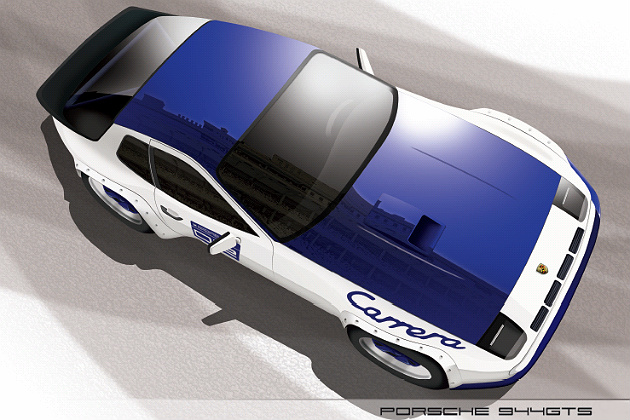 Graphic artist Daniel Winter created this design for the styling of the 944 Carrera GTS from conversations with Jason Gonzalez.

I was reveling in a 15-minute break from work (and life in general) and prodding through the online classifieds in search of my next something to long for. My standard exercise includes a general vintage, an approximate price tag and a manufacturer before clicking the search button on Google.

Even if my real plan is only to kill a few minutes, I want to feel productive — and who knows, perhaps even yield an effective result. How much would I afford myself today? What distinguished breed of GT car would I fancy researching, inspecting and negotiating for?

Over what great sporting car would I argue with a loving caretaker about? What flaws — real, apparent or otherwise — and problems would I point out to improve my bargaining position? What would it take to pry the alloy and leather from their loving hands and ultimately park her in my own garage?

Because I'm in the car business, I don't go on pure flights of fancy often. Even though I cruise the Internet frequently, I try to keep my digital journeys closer to (my) reality. I do this just in case one of my silly stretches of imagination should spawn an idea I might actually act upon. It seems that this would be one of those days.

Truth be told, I remember this day particularly. It was early September, and I was flipping through the 944Online.com forum. A new thread caught my eye. Someone had posed a question about what "your dream 924/944/968" would be.

I didn't have to give it much thought. Mine is easy. I want a 944 Carrera GTS. Only one problem: Porsche never made such a car. It did, however, make my daily Googling decision easy. Today, I'd pretend to afford myself $50,000 and see how close I could get to my imaginary car or at least something in its genre. I was going to find a challenge-ready, factory-prepared and street-mannered race car that someone was ready to part ways with.

In the spirit of my search I would keep it '80s. I quickly looked up a few top 10 lists and found some of the usual suspects, including BMW E30, Corvette, IROC Camaros and the ever-present 944. But I gave myself $50,000, and all of these cars were pocket change compared to that size budget.

So I dug a little deeper until I found someone who gave a nod to Ferrari and its challenge versions of the 308 and 328. I keep threatening to buy a Ferrari. I want a 308GTB. Not Magnum's GTS, mind you, specifically a GTB. I prefer the Berlinetta.

A GTB is carnal and visceral. The sound of that snotty V8 with its two pairs of Weber carbs and the slick hardtop makes a poignant statement. It screams out purpose-built. I can only imagine that guys like me didn't order cars like that when they were introduced if they intended to cruise around the wine country. There were convertibles for that reason.

In the case of the 308, her targa-roofed counterparts were the coach of choice for those brisk fall afternoon jaunts. The GTB and her comparably equipped friends were hard-topped, lightweight, modestly-appointed cars with spartan interiors and structural bracing. They were for racing, or at least for those who considered it.

My wife just looked at me with a knitted brow and shook her head. She knows better. Although I often threaten it, I don’t search out Ferraris for long. Instead I always seem to return to Porsche. Today was no different.

What is different is that today's Porsche search is for something specific. A lightweight and nimble car. By definition alone, today’s exercise would mandate that the car be track-ready. It should run on street gas and street tires but merely for the gesture.

Like the Ferrari, it must be beautiful, curvy and low and with broad hips and a vacuum low front spoiler. If my search wasn't inspired by the 944, I suppose that I could find a few 930s to fit the bill. The real problem here is that I know the car already. It should be a 924 Carrera GT.

So what would $50,000 afford me in such a car — contemporary to the sexy 308 and purpose-built for track time? Not much. Why not? Because a 924 Carrera GTS is too expensive. I can look on Craigslist, eBay or in any other online classifieds and find dozens 924s and 944s for a few thousand bucks, sometimes even a few hundred. So how is it that the 924 Carrera GT and GTS cars are too expensive?

To start, only 59 GTS cars were built. Most were raced. I don’t even know how many survived. I suppose attrition has gotten the better of a few, so there might be 50 or so floating around. Of those, there can’t be more than a handful for sale at any given time.

With that in mind, I suppose that it’s quite obvious that $50,000 isn't scoring a GTS. There were just more than 400 of their slightly more modest and mild-mannered siblings, the 924 Carrera GT built and sold. They're still quite expensive though, and while $50,000 might possibly get me one, perhaps I should double up my make-believe budget for the day.

By now, my 15-minute break is long over. My imagination has gotten the better of me again, and I have somehow circled back to my dream car — the one that Porsche never built — the 944 Carrera GTS.

Since my imaginary benders are usually curtailed by a hook, pulling me back to reality, I don’t often go far with the process. For some reason though, this September morning was quiet. I pulled up the pictures of the usual subjects. I visited Wikipedia to go over the statistics and specifications again. Honestly, they’re long since committed to my memory.

I know what I want. I curse my favorite carmaker for denying me. Why didn’t they build a 944 for homologation? Why didn’t they squeeze out a few hundred angry, temperamental race-ready cars so I could gawk at them? Why did they stop with the 924 cars? 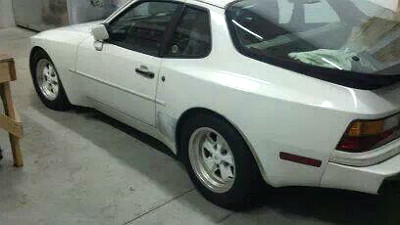 This 85.5 sunroof delete car will become the first 944 Carrera GT or GTS.

Wait just a minute. I have a shop. I have a collection of 944s that would happily provide me with the DNA to create just such a monster. I’ve had conversations with each of my cars. Any of them would gladly volunteer.

They don’t want to go to the scrapyard to become a Sonata. They want to be great. This is getting serious. At this point I’ve actually started rummaging my cluttered desk in search of a pencil.

I had the examples to start from. The webpages were still open before me — a hundred or so images of the 924 GTS. I have a collection of articles and clippings, every print specimen I can find about the GTS car. It’s a bit of an obsession. I have service manuals and brochures. I only need to close my eyes, and I can see my car.

The 924 GT and GTS variants made between 210 and 280 HP from highly-modified Audi 2.0L turbo motors. These were the same motors as in the street version 931 cars. I suppose I could stay in the family and the spirit and look to a 951 motor or, perhaps, just a larger displacement 944 NA motor or a 16-valve variety.

If I followed a similar path to the factory, I should try to get an additional 100 HP when compared to the base-model street cars. Can I get 250 HP from a naturally-aspirated 2.5L I4 without a bunch of bolt-on modifications?

If I am going to build a 944 Carrera GT or GTS and not just some look-alike, then it must remain all Porsche. Deciding whether it should be NA or turbocharged will dictate the transaxle of choice as well as bodywork requirements, cooling options and exhaust. 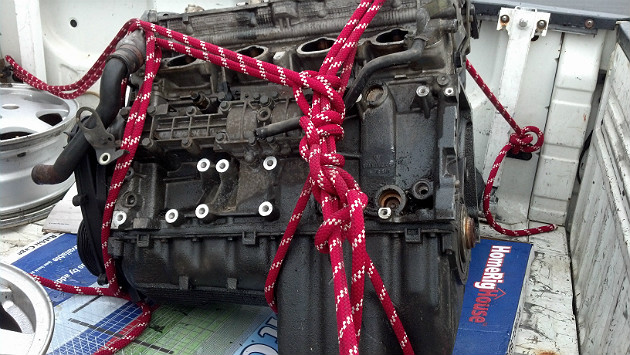 This 3.0L I4 motor from a 944 S2 that suffered a catastrophic failure will be the power plant.

For the visual cues, keeping it '80s is easy, too. The interior was simple black needle felt. The doors are gutted and finished with tidy cards and covers. Seats, windows, instruments and other components are all obtainable in my choice of OEM and equivalent parts. There are also modern and safe, race-inspired and sanctioning body-approved parts that Porsche would certainly have optioned into a 944 Carrera GT had they offered it to privateers and collectors.

I have a well-equipped shop and tools and experience. I’m the first to tell you, I’m no Porsche engineer, but I have the benefit of hindsight and research of the full body of their work. And, I have something they never did — I have the Internet.

My challenges won’t be sourcing parts and materials. It won’t be in building a visually-appealing car. It will be less tangible, more subjective. Can I design a car to pass a taste, touch and smell test? Can I produce a car that Porsche itself could have offered — should have offered?

I will need to keep her skinny and make her fast. If the 924 GTS is my example, then my car should tip in around 2,600 pounds. She should make the dash to 60 mph in under six seconds. It is imperative to run a comparable sprint and, further, to traverse the standing quarter in less than 15 seconds. The 924 GTS did it. A real 944 GTS would most definitely do as well, if not a shade better. That's how Porsche does things.

Can I do this? Can I build my dream car and still maintain its heritage? Can I radically change it, in and out, yet keep its very bloodline clean and blue? I’m really good, but am I that good? Why didn't Porsche do this 25 or 30 years ago? They must have, right? There must be a 944 GTS out there, forgotten, hidden under a dusty tarp in a warehouse. Why didn't they build this car?

My mind was racing. My planning gave way to conspiracy theory. I put the pencil down for a moment and went back to Google. Why does a 924 GTS cost more than $100,000? Why does it always find its way to the top of 10-best lists? Why didn't Porsche build the 944 version? Was it too good?

The 944 platform was to be the car to supersede 911. It was to become the new cornerstone Porsche. It was the car that saved the company. Why didn’t they build my car? What did they know? I need to calm down. After all, it really doesn’t matter.

Upon catching my breath and regaining my composure, I started to think about what had just transpired. Why was my heartrate elevated? Why was I sweating? I don’t know what prompted me to do what I did next, but I found myself back at Google. I typed into the Google search box, “Dr. Ferdinand Porsche quotes.” The first result was this, “I couldn't find the sports car of my dreams, so I built it myself.”

I knew what I had to do.