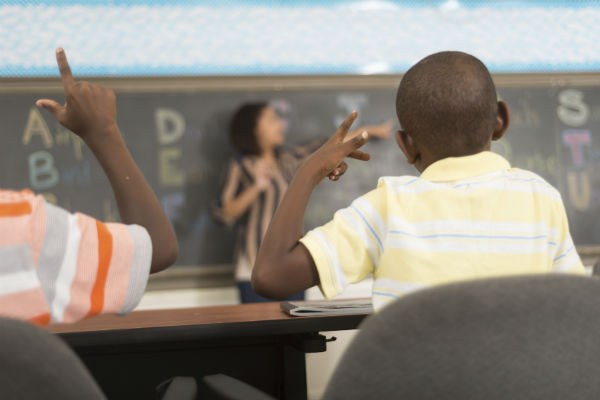 As I discussed in a previous article, the prelingually deaf often need ESL instruction since American Sign Language (ASL) is their first language.

English is a language deaf people have not heard or have heard only in a limited way. Thus, for them, ASL or another form of manual communication is the most accessible language because of its visual properties.

As Veda R. Charrow points out: "It is not the inability to hear that causes the most persistent problems of prelingually deaf persons, but the enormous constraints that that inability puts upon the learning and use of the societal language."

The differences between L1 and L2 affect the hearing impaired just as they affect other language learners: "Comparing signed to spoken languages is also instructive. In general, the grammar of sign languages — for example their allowable word orders — do not match those of neighboring spoken languages because of their independent development.

"However, contrary to what was (and is still sometimes) believed, sign languages share the richness and capacity of spoken languages. The late William Stokoe of Gallaudet College (later Gallaudet University) showed that American Sign Language meets the criteria to be classified a fully developed language, and changed conventional theory."

Deaf writers often make mistakes in vocabulary and grammar, particularly with articles, prepositions and verb tenses, and they have difficulty with embedding. They make errors in word forms, spelling and verbs that parallel typical ESL errors.

Teaching ESL to the deaf presents its own set of challenges: "Problem: Teaching English to students who are deaf and hard of hearing can be very challenging and sometimes frustrating. Professionals in the field understand that English is a very difficult language to learn, even for those of us that receive it auditorily as our first language. Teachers of English and Literature in schools for the deaf or mainstreamed classrooms may be constantly searching for materials and just the right English book that meets the unique needs of their students."

Like ESL students, they also need to connect to the world around them. The deaf form communities which are similar to those formed by L2 speakers.

"Sign (or signed) languages are principally used among members of what linguists call the 'culturally deaf' communities," Elizabeth Malone writes. "They rely on hand signs, facial expressions, body positions, motions and other physical signs (perhaps including mouthing the words) in order to communicate. By comparison, spoken language relies mostly on sounds on words."

The deaf community realizes the need for its members to become proficient in English so they can become part of the larger society. They advocate "support for bilingual ASL/English education of children who are deaf so they are competent in both languages."

Note the ACTFL Standards: "Communicate and interact with cultural competence in order to participate in multilingual communities at home and around the world. School and global communities: Learners use the language both within and beyond the classroom to interact and collaborate in their community and the globalized world."

Like other L1 groups, the deaf have a culture. ASL is their language, and English is the second language for many: "Deaf people who claim a culturally 'deaf' identity compare themselves to members of other ethnic communities. 'We have a language; we have a culture,' they say."

Deaf culture is similar to ethnic cultures in that it is based on language (ASL): "One possible definition of U.S. deaf culture (and there must be many) is a social, communal and creative force of, by and for deaf people based on American Sign Language (ASL). It encompasses communication, social protocol, art, entertainment, recreation (e.g., sports, travel, and deaf clubs) and worship."

For those who learn ASL as L1, English is a second language. They learn English in its written form, or "Signed English" or a mix of the two.

"Through the years, I have noticed that deaf students struggle with verb usage in sentences," according to DeafEd.net. "It seems difficult for them to remember whether to use is or are, was or were, do or does, etc. This is understandable since they are not hearing the way the language flows. Of course, reading is the key answer to writing English more proficiently; however, many deaf students are frustrated readers due to poor English comprehension."

The author of DeafEd.net has developed some rules that will help deaf learners. Click here to review them.

These suggestions will benefit those working with the hearing impaired or instructors who may have a deaf student in a regular ESL class.