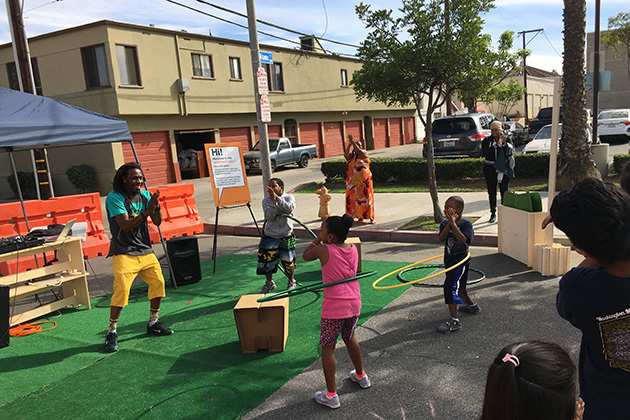 Strategic documents like master plans have long guided the direction of our cities. But now tactical interventions into city life are becoming increasingly popular.

This is the philosophy behind tactical urbanism: using the lean start-up mantra of "build, measure, learn, repeat" to make temporary interventions in neighborhoods on the local level. This might use carefully placed traffic cones, parklets or pop-up bike lanes.

Here we look at what it is, why it has created such a buzz in urbanist circles, and where its limits lie.

What is tactical urbanism?

If we can think of the city's master plan as the operating system of a city — the comprehensive set of rules guiding how the city grows — then what tactical urbanism targets is the source code.

Drawing on insights from the open-source movement, the tool uses cheap, temporary interventions (generated by users themselves) to transform public space and make small tweaks to that code. In this way, small-scale transformations help to create a feedback loop and lets us experiment with how the new space might work.

These are essentially demonstration projects. Through "planning by doing," they show both authorities and neighbors the potential of a space in a way that a map can never do. The tech analogies continue, as tactical urbanism has sometimes been described as "hacking the city."

It is easy to understand the movement's charm. Rather than following an endless paper trail of lobbying local government through frustrating official channels, tactical urbanists advise you instead to "drop a chair bomb," steal a traffic cone or wage a guerrilla attack on your local bike infrastructure. No bureaucratic mazes required.

Mike Lydon, the man who coined the term, believes tactical urbanism can start with short-term actions but achieve lasting improvements to urban spaces by gaining public and government support for investing in permanent projects.

Indeed, while there is something appealingly naughty about these unsanctioned tactics, some tactical urbanist efforts have gone mainstream. One of the most well-known is the Park(ing) Day phenomenon.

What started as an unsanctioned hack has evolved into a global movement reaching 183 cities that sees artists, designers and urbanists around the world reclaim metered parking spaces for one day each year as laboratories for creative placemaking.

In other cases governments have sanctioned, rather than dismantled, citizen-generated improvements. For example, the New York Department of Transportion's Plaza Program creates "neighborhood plazas throughout the City to transform underused streets into vibrant, social public spaces."

In U.S. cities, reaching the ear of urban policymakers with quirky intervention might be possible, but what about global cities that work on a different operating system?

Because of its focus on improving cities through participatory, grass roots engagement, tactical urbanism has been largely associated with cities in Western liberal democracies, particularly in the U.S.

However, as the movement has gone global, it is having to accommodate itself to some pretty tricky operating systems. In heavily controlled megacities like Beijing or Singapore, translating these hacks into long-term change will be more challenging.

One more tool in the toolbox

Tactical urbanism is defined by its rebellious, unsanctioned nature. In this way, it differs from traditional participative methods and consultative tools like community needs assessments and workshops held ahead of regeneration programs.

Such a new approach is long overdue, as we begin to understand that the planning systems we have inherited are poorly equipped to deal with the wicked problems of planetary urbanization. However, Lydon, the movement's founder, recommends that activists pursue tactical urbanist projects only when other sanctioned routes have been exhausted.

Tactical urbanism's greatest success is how it has opened up a communications channel that shows city planners and politicians explicitly what people want their neighborhoods to look like, and that is important. But cities still need to maintain and update their operating systems to tackle the "big issues," such as inequality and climate change resilience.

Tactical urbanism is an exciting new tool in the urbanist's toolbox, but it is still one tool among many.