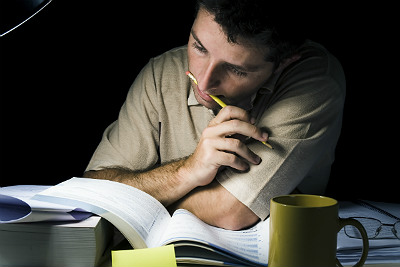 It's finals time, and college kids (among others) are looking for any approach that will give them the edge they need on their final exams and papers. But according to a recent study, some students are consuming more than copious amounts of coffee and energy drinks to push the limits of their studying stamina.

Prescription stimulant medications, such as Ritalin or Adderall, typically used for the treatment of attention deficit hyperactivity disorder (ADHD) in children and adults, are being misused for their potential benefit to improve focus during cram sessions. The study polled students at an Ivy League campus and discovered that nearly 1 in 5 (18 percent, to be exact) had used prescription stimulants in an attempt to improve their academic performance.

As a pharmacist, I find these facts concerning, though not surprising. Recently, Express Scripts released its trend report on prescription drug use and noted a significant rise (36 percent) in the number of stimulant prescriptions for ADHD over a five-year period from 2008 to 2012.

The greatest increases were not in prescriptions for children (the demographic that is traditionally identified as using these medications) but among adults, and especially among women. But even among children, the usage keeps climbing. Some physicians believe medications are being implemented too quickly and sometimes unnecessarily.

Speaking of doctors, maybe the trend toward increased utilization can be traced back to (some) physicians' own utilization of these stimulants during medical school. A study published in the February 2013 edition of the Annals of Clinical Psychology found that "three-fourths of medical students reported that they believed stimulants could enhance cognitive performance, and 1 in 5 had used them, typically for performance enhancement."

Maybe the perception is that these drugs can be safely and effectively used to improve concentration and therefore test scores even for individuals who do not have ADHD. This, however, is not an FDA-approved use and has yet to be proven.

Stimulants like methylphenidate and amphetamines exert their effects upon the neurotransmitters dopamine and norepinephrine in the brain. Though their mechanism of action is slightly different, they have both been effectively used to treat ADHD in children and adults.

But their use and effectiveness as "study aids" for individuals not otherwise diagnosed with ADHD is controversial at best. We lack scientific evidence to prove they help students achieve better test scores or write better papers.

University of Rhode Island Psychology professor Lisa Weyandt states: "It may increase their ability to focus, but it doesn't make them more intelligent or a superior reader. They may complete their assignments, but the quality of their work may not be any better, and it may be making it worse. In some cases prescription stimulants can actually impede their ability to do their work by causing them to overfocus and fixate on one part of the assignment."

The bottom line, Weyandt says, is that "there is limited evidence the drugs enhance the cognitive abilities of college students without ADHD."

The risks associated with the inappropriate use of stimulant medications are significant, too. On college campuses, where alcohol abuse might be possible, mixing these medications is especially dangerous. Because stimulants could offset the sedative effects of alcohol, an individual may mistakenly drink far more than normal, resulting in a potentially lethal event.

There have been reports of deaths associated with snorting methylphenidate in combination with alcohol. Additionally, the addictive potential for these stimulants must be considered.

Not only is there the uncertainty about safety and effectiveness for students without an underlying ADHD diagnosis, but there is also the legal ramification of utilizing prescriptions stimulants if they have been obtained illegally. Methylphenidate and amphetamine-based stimulants are considered Schedule II controlled substances, and "possession" of such substances without a legitimate prescription can result in significant fines and/or imprisonment.

We also have a duty to educate. At this time of year — maybe more than any other — we need to carefully consider prescriptions for stimulants that might need further research. We also need to remind patients not to share or leave their stimulant medications accessible to others for whom they were not prescribed.

Finally, we can remind all of our high school and college-aged patients that sometimes a good night of sleep prior to an exam is the only medication they really need.