Slug or buckshot? Weighing the pros and cons of shotgun load 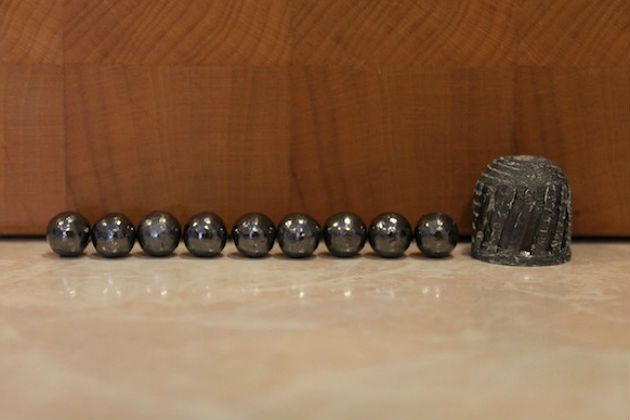 For those who hunt big game with a shotgun, it is important to weigh the advantages and disadvantages of using a slug or a load of buckshot. This debate has been raging for many years, and I probably won't settle it for during the course of this article.

However, I will discuss the pros and cons of hunting with a slug vs. buckshot and hopefully provide some good advice for prospective hunters.

Buckshot is the largest type of "shot" loaded in shotgun shells, and a typical buckshot load consists of multiple medium-diameter pellets. There are many different types and variations of buckshot currently in use, but 12-gauge 00 ("double-aught") buckshot — which normally consists of nine or more .33 caliber pellets — is the most common. As the name would suggest, buckshot was originally designed for use on medium-sized species of game, such as deer.

Like all types of shot, a buckshot pattern grows in size as the range increases. To a certain extent, this is good because it gives the hunter a little room for error when aiming. However, this also means that buckshot has a relatively short maximum effective range, usually around 30 yards depending on the exact shotgun and buckshot load being used.

Another disadvantage of using buckshot is the fact that since the individual pellets are normally relatively lightweight (a lead 00 buckshot pellet weighs 50-51 grains), they do not retain their energy or penetrate as well as slugs. This also limits the effectiveness of buckshot on thick-skinned animals and at anything other than short range.

That being said, when used at close range and on thin-skinned game, buckshot is absolutely devastating. The characteristics of buckshot make it extremely effective for shooting at moving animals, which is why it is so popular among hunters pursuing deer with hounds and by guides in Africa following up wounded leopards. As long as it is used under appropriate conditions, buckshot is an excellent choice, though it is not versatile.

In direct contrast to buckshot is a slug, which is a single, large-diameter projectile designed to be fired from a shotgun. Just like buckshot, there are many different types of shotgun slugs available on the market. While there are numerous differences between the various types, they all share several basic characteristics in performance.

The big advantage of using a slug is that it has a much longer effective range than buckshot. A 50-75-yard shot on a deer is usually well within the performance capability of a shotgun shooting slugs.

When using a barrel designed to shoot slugs and more precise iron sights or a scope, this range is extended even farther. Though a shotgun shooting slugs will not even come close to matching the effective range of most centerfire rifles, it can easily be used to take ethical shots on animals two to three times farther away than a shotgun shooting buckshot.

Additionally, since a slug is a single large-diameter projectile, it makes a big hole in whatever it hits. Though the exact size of the projectile varies, a 20-gauge slug is approximately twice the diameter of a .30-06 bullet, and a 12-gauge slug is even larger.

Shotgun slugs are also usually heavy: a 3/4 ounce (328 gr) 20-gauge slug and a 1 ounce (437.5 gr) 12-gauge slug are both significantly heavier than a 150 gr .30-06 bullet. Additionally, shotgun slugs retain their energy better and typically penetrate much deeper than buckshot.

A shotgun shooting a slug is also much more precise than a shotgun shooting buckshot. Depending on the situation, this can be either a good or a bad thing. However, this means the hunter has less margin for error when aiming, which is especially apparent when shooting at a moving target.

So, slug or buckshot?

Which should you use: buckshot or a slug? Well, it depends on the animal being hunted, the circumstances of the hunt and the local hunting regulations. It is not legal to hunt big game with buckshot in many places, probably due to the fact that so many hunters wound and lose deer by shooting them with buckshot at too long of a range. If this is the case where you hunt, the choice is simple: use a slug.

For the majority of hunters, using a slug is still probably the best choice due to the superior range and flexibility of the slug when compared to buckshot. However, if you hunt thin-skinned game (like deer) in an area where you are likely to only take extremely short-range shots, such as a place with extremely thick vegetation, then use buckshot (assuming it is legal to do so).