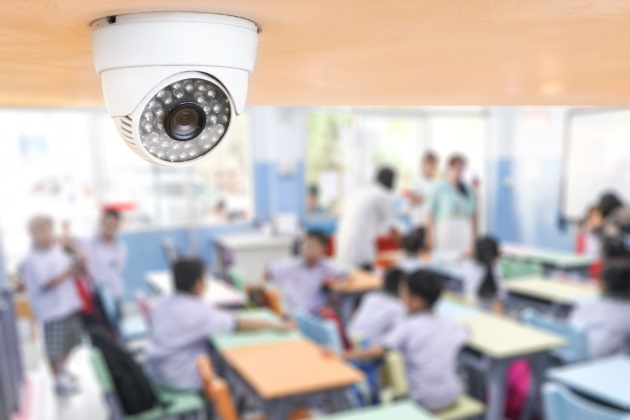 My suburban New Hampshire high school, home to some 800 students and staff, is not unlike many a high school from coast to coast that has received a variety of security upgrades, including the expansion of our video surveillance network.

What once was a limited system with just 10 cameras pointed in the most high-traffic parts of the campus is now a system approaching 100 individual cameras that record and save footage for nearly two months. Our eyes in the sky allow us to watch, in real time, our hallways, stairwells, common areas, athletic fields, cafeteria and patio, parking lots, and entrances/exits.

As visitors enter our building, they are greeted by a sign reminding them that our campus is under video surveillance. Our cameras have become an invaluable resource in our efforts to maintain order and discipline, acting as both a deterrent for misbehavior but also a primary witness in investigations involving our students in schools. I wonder how we ever lived without them.

As expansive as our security camera network is, we have drawn a line in the sand in terms of what footage we record. There are only two instructional spaces in our building under surveillance — and both for reasons other than monitoring classroom behavior: The gymnasiums and the school library.

Recently, Jennifer Herseim of District Administration reported that West Virginia is following Texas and Georgia as the latest state to pass legislation pertaining to the use of cameras in the classroom, specifically the special education classroom. Interestingly, the push for cameras is being made not by school administrators but rather parents and advocates looking to protect students against suspected maltreatment.

West Virginia’s law is based on an unfunded 2016 Texas law that requires video and audio recording upon request from a parent of a child in the classroom or from a staff member. The Texas law goes beyond small, self-contained special education classrooms and instead applies to a broader base of classrooms where more than 50% of students receive special education services for the majority of the day.

In Texas, cameras are rolling but footage is not monitored in real time. According to Jose Martín, an Austin, Texas, school attorney, "a recording is only viewed if there’s a report of abuse, neglect or sexual assault as defined by our Texas state family code."

Martín goes on to note that "districts are required to keep footage for three months and post signs to notify individuals that recording is in progress. Other parents may not prevent the cameras from being installed, but if other children appear in a recording, their images must be redacted to ensure confidentiality."

In Houston, 40 of the city’s nearly 300 campuses have been outfitted with camera systems to monitor special education classes, with an average cost of $10,000 per campus. The majority of these systems have been placed in elementary and middle schools.

In a typical setup with two self-contained special education classrooms, two cameras with microphones are installed opposite each other to capture the entire room and adjoining rooms. Additionally, these schools have installed audio-only recording equipment in changing areas and restrooms.

The Texas law, now being mimicked in Georgia and West Virginia, adds fuel to the debate of whether or not security cameras should be watching our children in the classroom, and whether or not these cameras actually work to protect students and staff from suspected mistreatment or inappropriate behavior, or add to anxiety levels.

The debate mimics similar arguments that have been made as other professions, from law enforcement to healthcare, have seen their privacy compromised by the inclusion of similar devices for similar reasons in their workspace. Although one might think that the law would drive special education teachers away from the job, Herseim reports that in Texas, that has not been the case at all.

"Kristin McGuire, director of governmental relations for the Texas Council of Administrators of Special Education, says that Texas districts feared the law would exacerbate existing staffing issues in special education. ‘I haven’t heard of that happening,’ McGuire says. Most of the response [from special education teachers] has been: ‘Do what you need to do to reassure parents and stakeholders.’"

It will be interesting to see if this trend continues for the other 47 states not yet requiring security cameras in classroom settings.