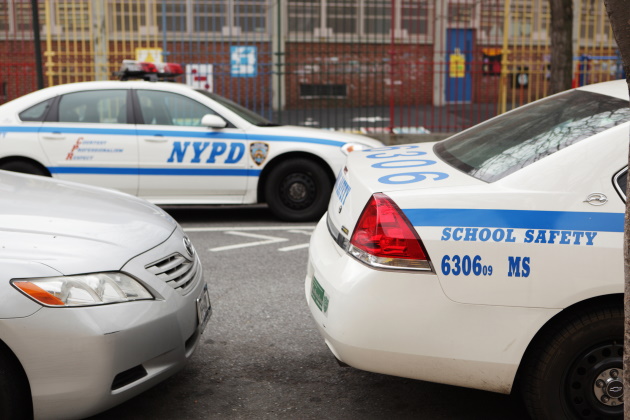 In the wake of George Lloyd’s killing, Americans have become increasingly critical of their police and of what has been termed “the massive expansion in the scope of policing over the past 40 years or so.”

The presence of police in K-12 schools in the U.S. has been particularly criticized. From the perspective of the Black Lives Matter movement, police in schools are more a threat to black students than a means of protection. Responding to this, school districts in Minneapolis; Seattle; Portland, Oregon; Denver, and elsewhere have begun plans to remove police from schools. Somewhat surprisingly, a clear majority of 1,150 teachers, principals and district leaders surveyed in a June Education Week poll still favor keeping police in schools.

Political conservatives generally consider teachers far too liberal. According to the conservative Pacific Research Institute, for example, around 90% of K-12 teachers are Democrats. Nonpartisan organizations confirm that teachers’ unions make about 94% of their political contributions to Democratic candidates and parties. The Education Week poll, however, adds a degree of complexity and even contradiction to this conventionally liberal profile.

On the one hand, an early June Pew Research poll determined that about two-thirds of Americans “somewhat or strongly support” Black Lives Matter. The EdWeek poll shows that over 80% of teachers support the movement and that white teachers support it nearly as much as teachers who aren’t white.

However, only 23% of teachers believe police should be entirely eliminated from schools. This is a significant finding because the role of police in schools is, if anything, underestimated by the general public. The reality is that police, not just security personnel, have a presence in 57% of U.S. K-12 schools.

What School Police Really Do

Many minority students, and nearly all Black students, believe school police represent a danger. Various recorded and videoed incidents lend a degree of plausibility to this view. Statistically, black students are “more likely to be harshly punished for ordinary misbehavior.” An earlier EdWeek research analysis of federal data concluded that although black students represent only 16% of the student population, they represent a third of all arrests by school police.

Who Is Being Protected — and From Whom?

While most teachers believe police in schools primarily protect students from outsiders, about a third of EdWeek’s respondents believe the threats were more likely to come from students themselves. They also significantly disagree with their own black students in believing by an overwhelming 91% majority that “armed police officers in your district’s school treat students of color fairly.”

This statistic is contradicted by another from the same EdWeek survey showing that around 90% of these same educators believe that black students’ higher discipline rates are the result of racial discrimination by school police. These views do not easily cohere.

What Explains These Contradictions?

These conflicting attitudes suggest that many teachers, like other Americans, haven’t fully resolved their beliefs and feelings about race. The poll even reveals that some white teachers retain disturbing beliefs that stereotype black students:

And What Do Parents and Voters Do With This Information?

It would be an impertinence, I think, for this writer — or anyone, really — to deliver firm conclusions about these surprisingly contradictory and confusing survey results. I can only note the profound difference between what many black students believe — that often the police are in schools primarily to provide another element of white control over black lives — and what many of their predominantly white teachers believe — that most police treat black students fairly, even as these same teachers acknowledge the nearly doubled discipline rate for black students.

I’m sure it must be disheartening for teachers to find themselves attacked for their “ultra-liberal views” by conservative Americans and then criticized by proponents of Black Lives Matter for their “lack of understanding of the realities of race in America.” But, this uncomfortable middle-space in the ongoing American racial debate is one inhabited by most of us.

Misunderstandings abound and will not disappear in a few months of increased attention to a 400-year-old dilemma. We are still largely a segregated society. A 2014 study cited in HuffPost showed that 75%of white Americans do not have a single black friend. Racial reconciliation and the endeavor to attain actual racial equality in such a segregated society will likely proceed slowly and fitfully. As Samuel Beckett famously noted, we can only “Try again. Fail again. Fail better.”