Within the Blue Ridge Mountains of Virginia, we found the Peaks of Otter to be a charming escape from the anxieties and fears of today’s world. These mountains provide quiet sanctuary, and there’s no shortage of interesting trivia.

Its name comes from the Cherokee word “Otari,” meaning “high places,” and perhaps from otters downriver. Early settlers included Polly Wood, a widow who opened the area’s first inn in 1834 within her log cabin home where settlers could stay the night and get a meal. By the late 1800s, the Peaks of Otter would be the home of some 20 families, with a school, a church and a hotel for travelers. 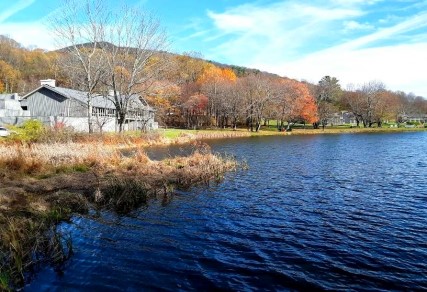 Thomas Jefferson and Robert E. Lee are just two of many luminaries who have visited and camped at the Peaks of Otter. Jefferson once wrote “these Peaks of Otter, are thought to be of greater height, measured from their base, than any others in our country, and perhaps North America.” Of course, back in Jefferson’s day he had no knowledge of the Rocky Mountains.

Today, the Peaks of Otter are an oasis, a haven in the middle of a mountain wilderness. A place to end your day in peaceful repose. The lodge, motel, restaurant and campground sit on a hillside providing a magnificent view of the Shenandoah Valley, the adjoining mountains and Abbott Lake.

Evidence found under Abbott Lake indicates Native Americans have been inhabiting this area to hunt, pass through, and rest for at least the past 8,000 years. In the spirit of those first Americans, Diane and I chose a room on the ground floor with an outdoor patio where we could sit and enjoy an evening cocktail while viewing the colorful sunset over Abbott’s Lake and Sharps Peak. Some guests prefer walking the trail or sitting under a tree near the lakeshore experiencing peaceful serenity while watching local wildlife.

Driving north from the Peaks, we entered the Shenandoah National Park. The highway is known as the “Skyline Drive” a 105-mile winding road overlooking the Shenandoah Valley through some truly beautiful Virginia countryside. Autumn and spring visits are especially colorful to drive the road, mile after glorious mile. This is undoubtedly one of America’s loveliest byways.

Big Meadows is a grassy, wide-open meadow, a dramatic change to the wooded forest of the park. We have many fond memories of weekend outings at the lodge and campground with our young children, the boulders we climbed, the trails we explored and the viewing of whitetail deer.

Is it true when people say, “Virginia is for Lovers?” Perhaps! I believe Virginia is for anyone who admires natural beauty with rolling hills, sandy seashores and majestic mountains. It is a land that possesses hospitable colonial charm in an age that has "gone with the wind." It is a land where people appreciate the memoirs of great men who formed our Republic. Old Virginia is rich in the annals of America’s most turbulent years.

Our next destination is lodging at the beautiful Bavarian Inn beside the Potomac River. Our travel route takes us through some of the most ferocious battlefields of the Civil War. Near Sharpsburg, we passed through an area known as the “Battle at Antietam.”

Antietam is a creek running through Maryland and the battle has been recognized as the bloodiest single-day battle in American history with 23,000 casualties. Many historians consider the Battle at Antietam a stalemate, with so many dead and wounded on both sides. I agree there was no significant victory on either side. The war continued, leading to Gettysburg and another clash of dragons.

The Bavarian Inn is without a doubt one of our favorite lodges, the atmosphere is Germanic, with gracious hospitality, and exquisite European cuisine. It is located in historic Shepherdstown, West Virginia, and for over 40 years has been hosting tourists and dignitaries from all nations. It was created by Erwin and Carol Asam, who purchased the Greystone Manor in 1977, completing a lifelong dream together with two sons. The manor became their dream restaurant and their home.

The Inn has several dining areas. Diane and I prefer the intimacy of the Rathskeller, a large area below the main floor of the reception building. The Rathskeller, to our liking, has several dimly lit rooms in a more casual, intimate atmosphere. It was the perfect setting after a day’s drive; it reminded us of what it would be like in an old-world pub surrounded with rich, exposed wood paneling, scenic landscape paintings, and a ceiling of stain glassed lanterns. 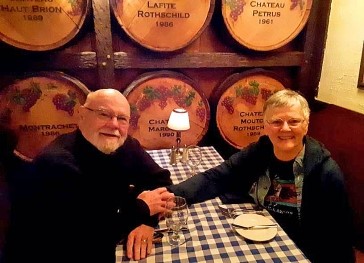 Our setting was at a table surrounded by old wooden barrels used in the production of wine. Speaking of wine, Diane decided on Centorri, a French red wine, and I a Tanqueray Gin martini with schwarzwaelder kaese spaetzle and black forest ham as an appetizer while we waited for dinner to be served. I can’t pronounce it, but it was damn good eating.

Our dinner was served by a very personable young woman who made excellent suggestions for dinner. Diane chose the lump crab cake with kaese spaetzle and I the smoked pheasant breast with maple bacon bourbon. They were so delicious.

Ending the evening with a brisk walk to our room, we called it a day. We slept in a large king size bed wrapped in soft cuddly warm blankets hemmed in by carved English woodwork. Slumber came rapidly with the pleasing sound of trickling water of the Potomac River passing by outside our window. Such was the day on the road. Good night to all, sleep well!