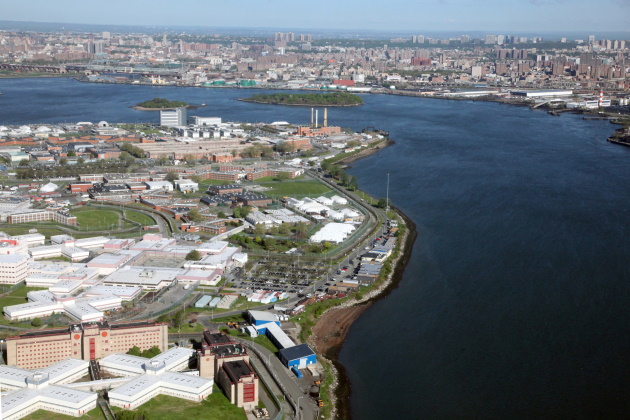 Rikers Island has an infection rate some eight times higher than New York City's — and 900 times that of China's.

Because of U.S. prison conditions before the pandemic, federal, state and county prison and jail facilities were considering or enacting various early and mass release, or facility shutdown, plans. These pre-pandemic release plans are the very COVID-19 infection and death mitigation plans required now, but not enough officials are enacting emergency protocols to release inmates from this contagion danger.

New York is beside itself with COVID-19 cases, as officials decide how to bury the dead. The New York Times ran a story stating that city parks would be used for burying people. The mayor’s office responded that it won’t be parks, but Hart Island instead.

The city has offered higher than average prison wages for routine grave digging: “New York City is offering prisoners at Rikers Island jail $6 per hour — a fortune by prison labor standards — and personal protective equipment if they agree to help dig mass graves on Hart Island...Avery Cohen, a spokesperson for the office of Mayor Bill de Blasio confirmed the general arrangement, but said that it was not 'Covid-specific,' noting that prisoners have been digging graves on Hart Island for years.”

The above quote perfectly summarizes the political battle about ethical mass releases under COVID-19 confinement conditions. That a New York City mayoral official attempts assurances that the work tradition of prisoner grave digging is longstanding in a pandemic reveals how ill-suited the prison system is to address inmates’ needs. Perceiving prisoners, living in overcrowded facilities, as sources of cheap labor, instead of a vulnerable category like “elderly,” may result in avoidable mass infection and death.

The first Rikers inmate COVID-19 death occurred on April 5. This is the same Rikers jail that is slated to close in 2026, but still remains open in the pandemic.

Instead of release, Rikers offers a “job opportunity” that will be pursued in the context of starkly limited opportunities for prisoners, as it appears that a significant number will have the opportunity to contract COVID-19 inside.

Stanford Law School’s David Mills editorializes in Business Insider that mass release is the only solution to a projected prisoner death rate of 100,000: “...in the face of COVID-19, we must acknowledge that the risk of death inside prison walls has become higher than the risk of releasing most people.”

In the prison reform era, U.S. wardens and corrections officials have all considered how their own facilities would undertake mass release. Now is the time to enact these measures, before mass infection creates that 100,000 projected dead inmates. Given death rate cover up evidence, imagine that number will be higher.

2018’s First Step Act has been releasing nonviolent offenders throughout the federal system.

Under lockdown, the first federal inmate has died, prompting reconsideration of Federal Bureau of Corrections policy: modified operations. Now, the Bureau is considering more releases — reform is in the air anyway. On March 28, Louisiana’s federal Oakdale facility saw its first COVID-19 death. This man, incarcerated on drug charges, was trying to get released under the First Step Act, but his application was rejected. Since that date, there have been four more Oakdale inmate deaths.

The federal system rethinks its lockdown policy as numbers rise: “As of Tuesday afternoon, 241 federal inmates and 72 BOP staff members had tested positive for COVID-19 nationwide.”

Pre-pandemic Oklahoma saw releases conducted and numerous organizations call for more: “The recommendations call for the release of many inmates who are at risk, inmates who would be released soon anyway or are being held pretrial as long as it did not threaten public safety...Increased cleaning and testing, access to hygiene products and moving to non-contact support groups and supervision proceedings were also included.”

They just did it, so they can do it again.

In California, a notoriously large homeless population needs housing, evictions and foreclosures are suspended, while cash bail is zero. A three judge federal panel recently ruled against mass release. On April 6, a judge from that same panel asked if a planned release of 3,500 in six months can be sped up to two months, with triple the number of inmates released: that’s 10,500.

There are homes, churches, parks, and empty office space and other facilities awaiting inmate release during this unconscionable crisis.

California evictions and foreclosures are suspended; short- and long-term housing is addressed on the grassroots level. Organizations are working on housing during the pandemic. In Oakland, a new organization, Moms4Housing, works on short- and long-term housing issues. Dominique Walker explains: “We are working on expanding the Tenant Opportunity to Purchase Act, or TOPA, a city ordinance in Berkeley and Oakland. We want to expand TOPA to include nonprofits and land trusts to purchase investor-owned vacant homes that corporations (like Wedgewood) bought during the foreclosure crisis.”

Smith, a diagnosed schizophrenic, is a former Sacramento, California, resident who was temporarily homeless. He remains confident his facility’s staff will follow all procedures to keep patients COVID-19-free.