Qualified immunity and why changing US policing will be very difficult 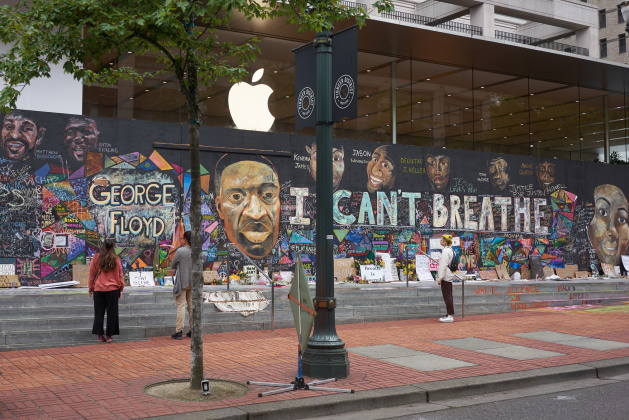 Less than a month after four Minneapolis policemen were charged with the killing of George Floyd — one of them on a second-degree murder count — public opinion in the country on race and criminal justice has shifted dramatically.

By a remarkable 28-point margin, Americans now support Black Lives Matter. Additionally, by a three-to-one majority, citizens believe that U.S. police departments need major reform. Unfortunately, achieving this will be much harder than most Americans understand.

Americans remain sharply polarized on most social issues and have little inclination to change their minds. Over a volatile three-plus years, for instance, President Trump’s approval ratings have only shifted within a five-point range. But within a few weeks, a majority of white and black Americans, both Republicans and Democrats, have come to believe that policing in the United States has wrongly disadvantaged persons of color and needs radical change.

Some city governments, with surprising public support, even believe police departments as they’re now constructed can’t be fixed — that they need to be defunded and replaced with other less punitive approaches — counseling and other forms of social guidance, for instance, rather than arrest and incarceration.

Whether you agree or disagree, the reality is that changing policing will be extremely difficult. For many years, police unions have efficiently fought back against changes proposed by reform commissions. District attorneys who could hold police accountable finance their election campaigns with police union money. Groups who oppose policing practices are divided and in disagreement with one another while those demanding the continuation of the status quo tend to speak with one voice.

Importantly, the connections between current police practices and major institutions run deep in unexpected ways. In illustration of this, I’d like focus on a single issue: the proposed withdrawal of qualified immunity from police.

The Origins of Qualified Immunity in Policing

Ironically, the judicial doctrine of qualified immunity began with statutes designed to combat Ku Klux Klan violence after the Civil War. The idea was to clarify the rights of citizens to file suit for monetary damages against government officials who violate their constitutional rights.

In practice, and following a number of decisions narrowing the range of qualifying violations, especially a 1982 Supreme Court decision (Harlow v. Fitzgerald), the statute has allowed officials immunity even if they’ve committed unlawful acts unless plaintiffs can prove the violations were “clearly established statutory or constitutional rights of which a reasonable person would have known.”

Following these high court decisions, lower courts have usually dismissed police brutality lawsuits “on grounds there is no prior court decision with nearly identical facts.” A judicial doctrine that began as an effort to clarify citizens’ rights, became one protecting police from suit even when they violate the law. It has come to mean not only that police are likely to be acquitted in police brutality suits, but that they have a right not to have to defend against such a suit to begin with.

The Attempt to End Qualified Immunity

Following a series of nationally publicized killings by police of black males under circumstances where police behavior has appeared fundamentally wrong and with a groundswell of public criticism and even revulsion against that behavior, the House Judiciary Committee introduced a bill to “hold law enforcement accountable for misconduct in court, improve transparency through data collection, and reform police training and policies.” It would end qualified immunity for police.

Despite what appears to be widespread public support for ending qualified immunity, there’s little chance the bill will ever become law. First, the Senate is controlled by Republicans, a majority of whom will almost certainly reject the bill even if Senate Majority Leader Mitch McConnell were to allow it to come up for a vote. Further, President Trump’s views on police violence are well-known. In the highly unlikely event the bill passed the Senate, it seems certain this “law-and-order” supporting President would veto it.

And, as it turns out, even if such a bill were to pass, it could prove unexpectedly divisive even among liberals.

A fundamental right in the U.S. Constitution is that all citizens are treated equally. In practice, of course, like any other human institution, the U.S. government hasn’t always been able to carry out this admirably high ideal in practice. Nevertheless, it’s there. What this means in the current circumstance is that any law that denied police a protection granted to every other civil servant would be attacked for being discriminatory.

To speak plainly and specifically, it’s unlikely that qualified immunity could be withdrawn from police without the same withdrawal from all other civil servants, among them teachers.

A recent case involving public school employees and qualified immunity shows just what a can of worms rejecting the doctrine could be. In brief, a four-year-old came to school with welts and bruises and was referred to a school-district social worker, who disrobed the child and photographed the injuries in an arguably misguided attempt to establish grounds for child protection.

The upshot was that the parent sued the employee and the school district, which, ultimately, were held unaccountable on grounds of qualified immunity. Whether this is a good decision or a bad one, I’ll leave to you. What’s interesting about this is that the defendant school employee and the school district received supporting friend-of-the-court briefs from such unlikely allies as the conservative/libertarian Cato Institute (which you might expect), the American Civil Liberties Union and the NAACP.

Historically, the National Education Association, the nation’s largest teachers’ union, has sometimes opposed education reforms that are perceived to be not in their members’ best interests. Recently, they’ve also supported police reforms that include ending qualified immunity.

A few years ago, a case involving a teacher’s defense on grounds of qualified immunity came before the 9th Circuit Court of Appeals — widely acknowledged to be the most liberal of U.S. circuits. The teacher was acquitted, and the court’s analysis included this comment:

“we must be careful not to curb intellectual freedom by imposing dogmatic restrictions that chill teachers from adopting the pedagogical methods they believe are most effective.”

Which seems unexceptionable — what could possibly be wrong about saying that? Well, here’s the same sentence with a single personnel change, from one public servant to another:

“we must be careful not to curb police actions by imposing dogmatic restrictions that chill police from adopting the police methods they believe are most effective.”

Getting these conflicts resolved in a way that leaves important parties equally protected — teachers and black American males alike — will not be easy. Finding a solution may begin by acknowledging how difficult it will be to find one.