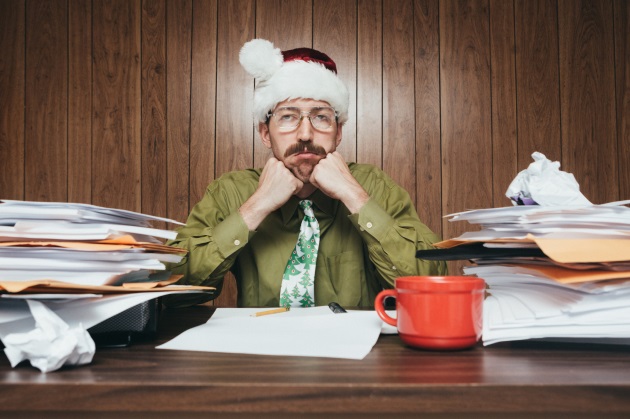 "It’s the most wonderful time of the year," and yet, many employees don’t feel they can fully enjoy the holiday season because of work demands.

In fact, a West Monroe Partners study found that 51 percent of employees are uncomfortable — or at least somewhat uncomfortable — asking for time off during the holidays. When asked why, the surveyed employees responded as follows:

The results are no surprise to veteran HR expert Tim Sackett, president at HRU Technical Resources, and author of "The Talent Fix: A Leader’s Guide to Recruiting Great Talent." Sackett tells MultiBriefs, "It turns out that not working and enjoying time relaxing, spending time with loved ones, et cetera, feels better than work — who knew?!"

Sackett says most employees would rather be on vacation than at work during the holiday season.

But, if it’s that obvious, why is it a problem for employees to take off? Why should they feel uncomfortable asking to use the time that they have accrued?

Well, some companies earn a significant amount of their revenue during the holiday quarter. For example, Amazon projects that its fourth quarter net sales will be between $66.5 billion and $72.5 billion. UPS plans to deliver close to 800 million packages between Thanksgiving and Christmas, while the USPS expects to deliver 900 million packages.

It’s safe to assume that not a lot of these employees are taking a significant amount of time off during the holidays.

"I think people are loyal to their company, they know that the holidays are difficult, and most of all, they don't want to let their coworkers down," says Quint Studer, founder of the Studer Group healthcare consulting firm, and author of "Hardwiring Excellence."

As employees consider asking for time off, Studer says they’re also considering that whomever is left at work will have to work extra hard. “So, I think actually it's a sign of people worrying about other people in the community,” he concludes.

However, we’ve all worked with employees who couldn’t care less how their absence would affect the remaining workers. Employee engagement consultant and branding coach Nichole Wesson believes that hesitant employees are probably more concerned with how the manager views time off. "If a manager has shown reluctance in approving time off in the past, the employee will surely be reluctant to ask," she says.

"Also, there have been instances where companies execute layoffs in January," Wesson explains. "An employee may feel if they do not ask for time off during the holidays, they are in a better position to weather a possible layoff in the new year." And workers who just dodged a bullet in a fourth quarter layoff aren’t likely to roll the dice by asking for time off during the holidays.

Aside from lay-off scenarios, Jonathan H. Westover, Ph.D., associate professor of organizational leadership at Utah Valley University, believes that a reluctance to ask for time off during the holidays is part of a much larger issue: employees don’t feel comfortable using their PTO at any time of the year.

"We know that American employees tend to only use about half of their available PTO time throughout the year — much less than other western industrialized countries — and many U.S. employees end up with a lot of unused PTO time at the end of the year," Westover says.

He believes that some of this may be solvable by using a systems/structural approach in which PTO is used quarterly, instead of yearly, but Westover also believes that organizational culture plays a role in how workers utilize time. "If employees have PTO available but also receive consistent pressure from up the line to be in the office working, they are far less likely to actually take time off, as it could have implications for performance reviews, bonuses, and potential future promotions."

Westover also says employees follow the lead of their managers. "If there is a culture of ‘all hands on deck’ and managers and organizational leaders not taking PTO time, this will have a direct impact on the likelihood of the average employee using their available PTO time."

Since employees also want to be seen as an indispensable asset to the organization, Westover says they may be concerned that taking off a week or two could undermine their perceived value in the organization.

The West Monroe study also found that 51 percent of surveyed employees also feel unmotivated to come back after the holidays are over. If these are the same people who were hesitant to ask for time off, it’s not hard to believe that they wouldn’t be excited to return.

"Many employees are relatively unmotivated to return to work in the new year, in part because they are stilled burned out from work, but also because I think there is an equity and fairness calculation (whether done consciously or unconsciously) following the holidays," Westover says.

"Employees know they have unused PTO, they resent not being able to use it all, and sometimes they attempt to balance the scales with a lower motivation/productivity level upon returning to work," Westover says.

So, companies need to make an effort to clearly and consistently communicate that work-life balance is important, and Westover says managers and executives need to lead by example.

In some industries, it may not be possible for most of the employees to take time off. However, these companies must figure out other ways to provide balance — or at least show their appreciation. "For example, in my city (Pensacola, Florida), the restaurants and bars that stay open are busy during the holidays, but right after the first of the year, they do a number of celebrations to thank their employees," Studer says.

He explains that for some companies, whether they stay in business or not is dependent on how well they perform during the holidays, so letting people off during this time is not an option. "But for companies that have busy holiday seasons, figure out different ways to celebrate your workers," Studer advises.

For companies that don’t depend on the holidays for their revenue, more flexibility during this time of year could make a difference in employee engagement levels. More remote work options and scheduling flexibility can positively impact workers.

Also, give employees something to be excited about in the new year. "Have something that is exciting to work on and important to the success of the organization upon their return, and let your employees know what that project is before they leave," Sackett says. "That way, while they’re on vacation, they’ll also be a little excited to work on a great, challenging project when they get back to work."