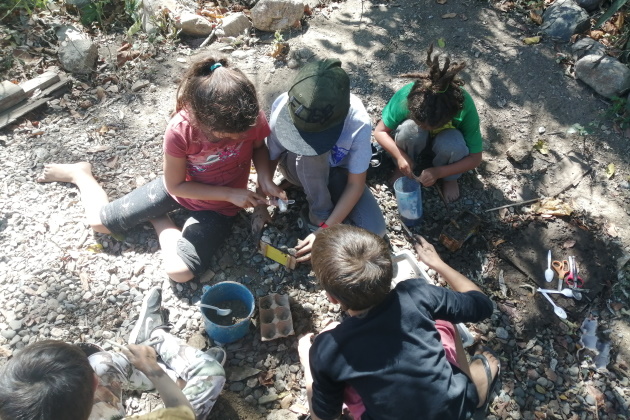 Under tall mango trees between a dry river bed and two large warehouses, kids ranging between three and 12 years old gather midday for story time. They sit on stumps spaced in a circle. A few interact with some ants and each other. After they introduce themselves in big outdoor voices, Nicole Majewski reads a story interjecting commentary and inviting response as she goes along.

Since the beginning of the school year, Majewski, education director at EntreAmigos, a nonprofit in San Pancho, Nayarit, Mexico, and other educators have been bringing activities like watercolor painting, mud play and treasure hunts to kids outdoors. She notes that many families are experiencing a great deal of financial burden and don’t have access to internet or schooling right since all schools incorporated in the national public school system remain remote.

“These outdoor classes give them the opportunity to be out in the fresh air and have more freedom to move around while interacting with others socially.”

After the story ends, the group discusses it, they move over to yoga mats scattered on the ground at the bases of the trees and sew with needle and thread. Even doing activities normally considered rainy day activities like sewing or reading books has an added dimension when done outdoors.

Taking classes outdoors to playgrounds, gardens, parks and even the woods is part of a movement around North America largely tied to safe learning during the pandemic. It also provides a counterbalance to the onslaught of digital existence for those who have access and a lifeline for those who don’t.

Overcoming obstacles to get children engaged and connected to nature

In a recent National Geographic article, Jeanne McCarty, CEO of Out Teach, a nonprofit that partners with schools to connect them with outdoor learning resources, says, “It’s not just teaching outdoors but using the outdoors to teach in real, hands-on ways. It makes education more relevant to students’ lives. When they experience something, it’s more meaningful to them.”

Similarly, when she’s teaching about the natural world, Majewski, also a board member for The Cedarsong Way, says that being surrounded by nature engages students on a more powerful, contextual level than seeing something in a book or on a screen.

Erin Kenny, founder of The Cedarsong Way, the original forest kindergarten program developed in the U.S., defined nature immersion as “unstructured free time in nature, resulting in an intimate, deep and personal connection to the natural world.”

Yet, teachers and students who’ve grown accustomed to being indoors and a certain structure may find the shift takes some getting used to.

Just get outside, recommends Emma Howell, a pre-K teacher at Guilford Central School in southeastern Vermont, which has worked outside at least half the day since the fall. In the National Geographic article, she says, "Don’t worry if kids aren't sure what to do with unstructured outdoor play. It's not uncommon for kids to experience uncertainty and ‘boredom’ before they figure out how to engage.” 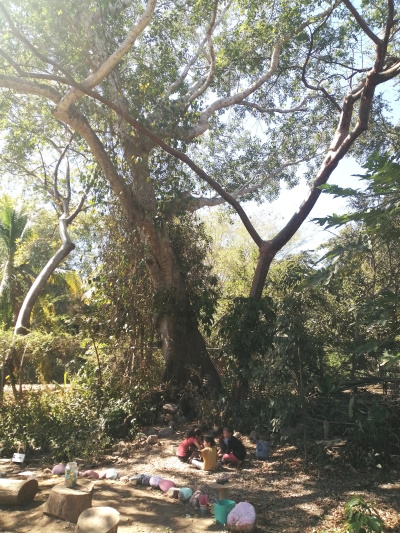 Making the golden age of outdoor education accessible to every child

Parents and educators alike are speaking out on how critical contact with nature is for children’s and adolescents’ mental health. Outdoor education is an ideal way to provide that.

"I think we're entering the golden age of outdoor education," says Sam Stegeman, executive director of the Vermont Wilderness School, in a September article on NPR. "Because of COVID, one of the silver linings is we're finally getting huge numbers of American children outdoors during the school day."

According to the article, numerous New England wilderness schools claimed they could double or triple their already increased programming and still have waiting lists.

Yet the increased demand for outdoor and wilderness programs raises questions of access. In the rush to get their kids off-screen and outside in wilderness home-school groups, are parents of privilege engaging in another example of opportunity hoarding as seen during the learning pod craze?

Such real concerns underscore the need for outdoor learning to be widespread and systemic. Equity and access were cornerstones of the National COVID-19 Outdoor Learning Initiative, which I reported on in July a previous MultiBriefs article. A group of national stakeholders involved in the initiative continues to convene regularly and their case study library is growing. Their work was also mentioned in a New York Times article detailing four outdoor learning environments around the U.S.

In fact, teachers in a private school in Oakland who’ve embraced teaching outside state in EdSurge that they don’t see the need to return to the way instruction used to be.

Relating nature experiences with the big picture of conservation

As our modern world grapples with how to function sustainably, outdoor education helps students (and educators) tune into the magnificence of nature and become more attuned to issues facing the planet today.

Green Schools Project, which helps U.K. schools move towards becoming zero-carbon, emphasizes the importance of encouraging people of all ages to realize what they stand to lose in the crisis our natural world is now facing. One way is by sharing stories to facilitate a cross-generational conversation about how wildlife has changed during our lifetime with the #RememberingNature hashtag.

Slowing down and developing mindfulness as a teacher is a first step to allowing the space for children to connect with nature and develop awe.

As one aquatics instructor who made this shift noted in a blog by Dr. Wallace Nichols of Blue Mind fame, “Often times, being so focused on the skills and safety of the activity, I neglect the opportunity to just allow the students to be engaged with the water on their terms. After today I plan to build in more time for play and solitude, and to touch the water and splash and to just ‘be present’…without correcting their cross draw stroke!”