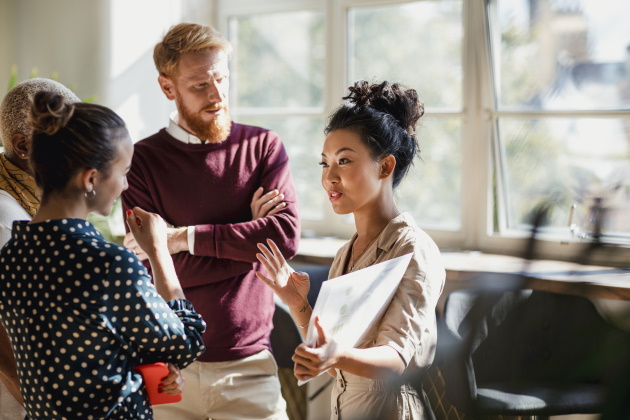 Many experts say having a workplace culture of knowledge sharing raises productivity and creates a more positive work environment.

Worries about looking incompetent can keep struggling workers from asking for help. Moreover, they may find it difficult to carve out time to seek advice from their busy colleagues.

But in a new study in the August 2020 issue of The Quarterly Journal of Economics, Jason Sandvik, Ph.D., an assistant professor at Tulane University’s Freeman School of Business, and his co-authors discuss an innovative strategy for increasing knowledge sharing at work to boost performance.

Sandvik and his coauthors conducted a four-week-long study at an inbound sales call center. The test subjects, 653 sales agents, worked in two of the call center’s office buildings.

The researchers divided the 653 sales agents into four groups. Within the groups, they paired each agent with a randomly assigned partner.

In the first group, the Structured Meeting Group, the researchers required that every sales agent and their partner meet once a week to talk about issues on the job, their goals and to give each other advice.

The researchers added structure to the meetings by requiring each sales agent to fill out a worksheet ahead of time and record their conversations to document their interactions. The sales agents then turned in their worksheets every Wednesday.

Those who completed the worksheets received a free catered lunch for the week. And during the lunch, the two sales agents were encouraged to discuss other talking points related to their prior discussion, but they were not required to document those discussions.

The researchers also organized a second cohort, the Pairs-Incentive Group. They paired the sales agents up like the first group, but instead of attending structured meetings, each pair of agents competed against other teams in their group to earn rewards. The pair with the highest percentage increase won prizes, the cash-equivalent of about $50. The prizes included item like golf vouchers and tickets to events.

Meanwhile, a fourth group of sales agents functioned as an internal control group. Agents in the control group had their joint revenue-per-call gains posted publicly, but researchers did not provide them with incentives or ask them to attend meetings.

The researchers, however, observed no change in the control group's performance.

“But the most interesting result,” says Sandvik, “was the persistence of the improvement among the Structured Meeting and Combined Treatment groups.”

In fact, improvements in revenues-per-call remained consistently elevated among the Structured Meeting and Combined groups, not only throughout the four-week experiment, but even months after researchers ended the meetings and competitions.

On the other hand, the Pairs-Incentive Group’s performance dropped immediately to their pre-experiment baseline levels after the research project ended.

Sandvik says that while the Pairs-Incentives Group worked harder to win the prizes, they did not necessarily self-organize with their partner to exchange knowledge. Consequently, their increased sales gains did not last.

Sandvik also noted that both call center offices had open floor plans. Such floor plans are the latest trend for promoting creativity and knowledge sharing.

“So you would think that given the open office layout and the friendly environment that that would be enough to get people to share their knowledge with each other,” he says. “But once we imposed the intervention, we saw drastic and persistent increases in performance. That suggested that just having that open office layout wasn’t enough to get people to share their best practices with each other.”

So, to execute effective knowledge sharing in the workplace, managers must take charge and organize meetings between their employees rather than leaving it up to them to self-organize, he says.

Sandvik says managers should be explicit and deliberate in articulating what they want their workers to do and discuss during the meetings, how often they should meet, and the setting to reduce social inhibitions.

But, because so many companies this year have transitioned to work-from-home environments, Sandvik says managers may think that organizing structured meetings is out of the question, but that is not the case.

“Just because individuals can’t be face to face doesn’t mean structured meetings can’t take place,” he says. “A manager could very easily set up structured meetings between employees using Zoom or Microsoft Teams or some other video conferencing software and ask their employees to meet at a specified time.”

Sandvik also says that just like in the research study, managers can ask employees to jot down talking points before their meetings to help move the conversations forward.

“But one of the additional parts of the analysis that we have in the paper is that we look at those instances when historically high performers were paired with historically low performers, and, that’s where we ended up seeing the greatest lift in performance,” Sandvik says.

“What we gleaned from that is that top performers were sharing the most helpful best practices,” he says.

Part of what makes a sales agent a top performer, says Sandvik, is that they know their way through the sales process. They know different ways of dealing with the difficulties that arise when trying to make a sale, and they are experienced at navigating those difficulties.

“The big takeaway is that having your most productive employees share best practices with less productive employees can be a quick and effective way to boost overall productivity,” says Sandvik. “And to that extent, that’s the goal of the manager and the company. So there’s a clear benefit to having individuals exchange knowledge in this way.”