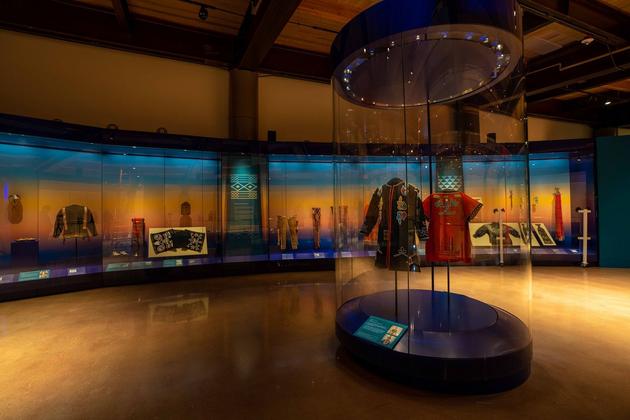 The rhythmic sounds of drumming, shaking and chanting of ruffled and beaded Chickasaw dancers echoed off the looming glass and steel edifice of Oklahoma City's dazzling new $175 million First Americans Museum on Sept. 18 – signaling the opening of a repository uniquely designed to tell history through the lens of the region's tribal peoples.

Established to promote the history, cultures, contributions and resilience of the First American Nations in Oklahoma, the museum has finally become a reality after more than three decades of planning, funding problems and construction delays.

Welcoming visitors to the gala ceremony, James Pepper Henry, executive director of the museum and vice-chairman of the Kaw Nation, noted, "We have accomplished something that has never been done on this scale, to take full authority over the content, development and interpretation of our First American histories and cultural materials."

Complicating the planning, says Henry, "was how to devise a way to show the collective histories of 39 tribes and the common circumstances that brought those tribes here to Oklahoma."

Making things even more challenging is the fact that only a few tribal nations were indigenous to the region. Most came as a result of the Indian Removal Act of 1830, when more than 100,000 Native Americans were forced from their ancestral homelands to Indian Territory – or what is now Oklahoma. The state's name comes from two Choctaw words – "Okla" and "Homma," meaning "Red People."

During this migration, called the Trail of Tears, more than 15,000 men, women and children perished of disease, starvation and exposure to the elements. By the time Oklahoma entered the union in 1907, it was home to a patchwork of native peoples from across the country.

"Oklahoma, or Indian Territory, was originally meant to be a giant internment camp," said Henry. "It's a brutal history and we haven't shied away from telling those stories. But it also is a story of perseverance – a story of survival. We've overcome a lot of those challenges, and now we're reclaiming our cultural life ways. We are not relics of the past. We are still here and we're moving forward into the future. This museum celebrates that."

The museum opens with two inaugural exhibits. OKLA HOMMA (those Choctaw words that later became the state's name) is an original, mixed media interactive exhibition that highlights the stories of tribal peoples who lived in the area now known as Oklahoma. The second exhibit, WINIKO: Life of an Object – a captivating collection of objects on a 10-year loan from the Smithsonian's National Museum of the American Indian in Washington DC – showcases 144 everyday cultural objects collected in the late19th century from tribes in Oklahoma.

"There are a total of 29 short films between both exhibitions, and there are lots of interactive exhibits too," says Shoshana Wasserman, deputy director of the museum, and a member of the Muscogee (Creek) Nation, "It's not just walking through and seeing a bunch of cultural material in cases."

The two buildings making up the museum campus – the 4,000-square-foot FAM Center that serves as an educational resource center, and the 175,000-square-foot museum – are nearly as much a part of the story as what's inside them.

Viewed from above, the buildings are organized around a theme of concentric circles: the buildings appear as arcs, all parts making up the whole. A circular courtyard occupies the center and there's a 90-foot-tall arched glass half-circle (or dome) known as the Hall of the People that takes its inspiration from grass houses typical of the Caddo and Wichita peoples. Beyond a massive plaza sits a man-made mound that pays homage to the pre-Columbian Mound Builder cultures common to the Lower Mississippi Valley.

The First Americans Museum is prominently situated on a 40-acre tract along the southern bank of the Oklahoma River near the intersection of Interstates 40 and 35.