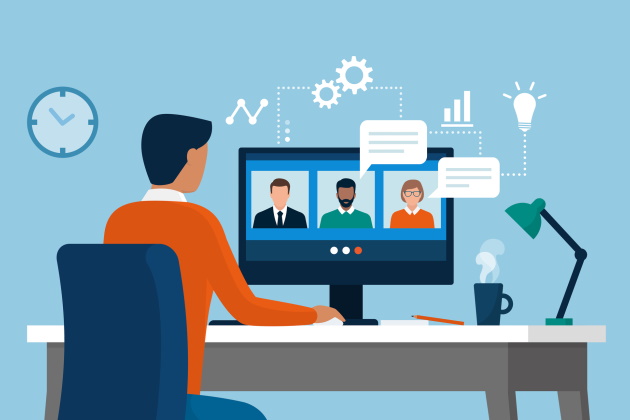 One advantage of working from home is the absence of unproductive, time-consuming, in-person meetings. For a while, video conferences were rather interesting, and they gave workers a sense of connection with team members. But now, two different reports reveal that employees are growing weary of video communication as well.

According to a Robert Half survey, 38% of respondents say they’ve experienced video call fatigue.

The Owl Labs/Global Workplace Analytics State of Remote Work survey reveals that 44% don’t find it necessary to get dressed up for a video meeting, which is a good thing. However, 70% believe there should be a day each week without any meetings.

According to Richard Deosingh, a district president for Robert Half, at the beginning of the pandemic, when people were in a state of confusion, video calls provided quick answers. “Video was the go-to way to communicate, and over-communicate, with teams and colleagues with information and changes often coming in daily, if not multiple times per day.”

But now, he says we’ve come to the realization that we can’t duplicate in-office behavior. “Adjustments have had to be made in order to create the best working situations for the current environment, and some of that includes reevaluating the way we hold meetings and communicate with our colleagues.”

The idea of being tethered to your home office for 8 or 9 hours isn’t realistic, and Deosingh says it may not even be what’s best for employees anymore. “Video calls don’t allow for the flexibility and mobility that working from home is meant to achieve, which may be contributing to fatigue.”

The Owl Labs/Global Analytics survey also reveals that respondents were almost evenly split on whether they thought video meetings (53%) or in-person meetings (56%) were more tiring. “More than seven in ten said once the pandemic is over, they would prefer video over a face-to-face meeting even if it was in the same office,” says Kate Lister, president of Global Workplace Analytics. “A slightly higher percent (73%) said they’d use video over traveling to a local meeting.”

It’s clear that video is a more convenient way to meet. However, 76% of respondents said not all meetings should include video, and 72% thought they should have the option to turn on their camera or not.

“I think, over time, we will settle into a place where employers develop parameters around the use of video and teams define specific protocols amongst themselves,” Lister says.

One problem with video calls is that they can be as inefficient as in-person meetings. “Inefficiencies with meetings can come in many forms — whether it’s some of the common pet peeves like tech issues or distractions or just the fact that it’s a standing meeting on the calendar whose necessity hasn’t been assessed since the first meeting was created,” Deosingh says.

For example, he says Robert Half has seen and heard about teams who created daily or weekly check-in meetings at the beginning of the pandemic. “Originally, these video meetings were designed to ensure teams and colleagues were managing OK and dealing with all the changes.” Sometimes, he says the meetings just took the place of the watercooler chat, and since stress and anxiety levels were so high, such routine contact may have been necessary. “But now that workers are putting in more time and demands are increasing, these meetings may feel too frequent or unnecessary, as people have gotten used to their new way to work.”

Deosingh recommends doing an audit to ensure that video calls are still needed. In Robert Half’s survey, 24% of respondents found virtual meetings to be inefficient and exhausting and preferred to communicate via email or phone.

“Also, provide an agenda to participants before the start of the call so you make the best use of everyone’s time,” he advises. “Provide follow-up with either outcomes or to-do’s so attendees can see and understand the value of the call.”

In addition, it may be best to keep the meeting small. “If you keep the invite list to about 4 people, attendees can feel like they’re able to participate, engage and brainstorm in an effective way,” Deosingh says. On the other hand, if you have too many people on the call, he says you’ll end up with many of them on mute, and just a few people will actively participate.

Sometimes, you may be the person on mute who is not actively participating. If so, Lister warns against multitasking. “If the content of the meeting does not hold your interest, you probably shouldn’t be there,” she says.