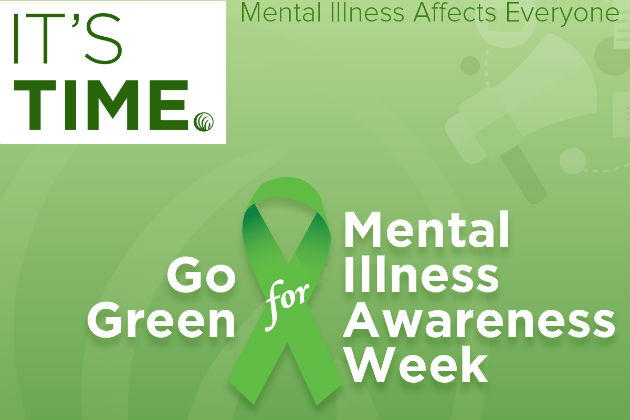 Four days ago, a judge in Alexandria, Virginia, found a cab driver not guilty of shooting a police officer in the head during an attack last year. The judge stated that the cab driver, Kashif Bashir, did not understand what he was doing when he shot the officer in the head. Bashir had long suffered from paranoid schizophrenia, and the court determined he was insane at the time of the shooting.

This illness and many others are being put into spotlight during Mental Illness Awareness Week (MIAW) — Oct. 5-11. The first full week of October was established by Congress in 1990 as MIAW in recognition of the National Alliance on Mental Illness' efforts to raise mental illness awareness.

Since the start of MIAW, mental health advocates across the country have come together to sponsor and host activities for public education about mental illness. MIAW coincides with the National Day of Prayer for Mental Illness Recovery and Understanding (Oct. 7) and National Depression Screening Day (Oct. 9).

According to the Centers for Disease Control and Prevention, 33,300 people who suffered from a mental illness died by suicide in the U.S. in 2006. This number increases each year. At the same time, states nationwide have cut $4.5 billion from mental healthcare funding since 2008.

Michael J. Fitzpatrick, executive director of the National Alliance on Mental Illness, said that it is important for people to realize the issues surrounding serious mental illness.

"Most Americans understand that mental illnesses are treatable illnesses. I think people basically understand depression," Fitzpatrick told HealthDay News. "Depression is talked about in the media and is considered a treatable disease. But when you reach psychosis and schizophrenia, there's still a lot of misunderstanding and fear."

The two psychologists who evaluated Bashir stated that he them a voice in his head had sent him to the design shop on a mission of terror and that his brain was being reprogrammed; he needed to commit robbery and rape and to shoot a police officer to help him move toward some sort of higher state of being.

Initially, the doctors said that Bashir was planning to rape a worker at a shop he visited Feb. 26, but the worker convinced him to leave as she locked the door. From there, he drove back the next day with the same plan and noticed the police officer inside.

Bashir's defense attorneys argued that he suffered from "pervasive" mental illness that most likely originated during his childhood in Pakistan. The judge stated that mental health officials would have 45 days to curate a report about Bashir, and then prosecutors and defense attorneys would return to court to decide whether Bashir should be committed to a mental health institution or released with conditions.

Defined in the Diagnostic and Statistical Manual of Mental Disorders, paranoid schizophrenia is the most common type of schizophrenia — a chronic mental illness in which a person loses touch with reality.

The clinical picture is dominated by relatively stable (and often paranoid) delusions, hallucinations (mainly hearing voices) and perceptual disturbances. These symptoms can affect functioning and can negatively impact an individual's quality of life. It's a lifelong illness, but with the proper treatment, an individual suffering can live a higher quality of life.

"A lot of people have misconceptions about mental illness, and they think that it's just like any other illness," said Mary Issah, executive director of NAMI Johnson County, Iowa.

"When somebody is hospitalized with cancer, we bring them casseroles, but when it comes to mental illness, we don't talk about it. It just has a lot of stigma attached to it, so it's important to raise awareness about treatment and recovery from mental illness.”

Unfortunately, the stigma may always be there, but there's still the fact that the proper care and supportive services are not available to these individuals with severe mental illness. For example, the number of U.S. psychiatrists is steadily decreasing; the overall downward trend has occurred for the past six years, according to a National Resident Matching Program report.

If we had more highly-trained mental health professionals — including social workers, nurses, psychologists, support groups, etc. — it would motivate advocates and communities to help control mental health issues and continue in the discovery of treatment.