A man who lived 555 days using an artificial heart finally received a transplant of a human heart in May.

The 25-year-old Michigan man had his real heart removed in November 2014. A total artificial heart powered by an external battery pack kept him alive and allowed him to stay home instead of in a hospital while a donor heart was sought.

"Most people would be scared to go so long with (an artificial heart), but I just want to tell them that you have to go through the fear, because it helps you," the patient, Stan Larkin, told CNN. "I'm going home so fast after the transplant because it helped me stay healthy before the transplant."

Larkin had arrhythmogenic dysplasia, a genetic condition that causes arrhythmias and failure on both sides of the heart. The condition was identified when he collapsed during a basketball game. He and his younger brother were both diagnosed with the condition as teenagers.

"It's an awful condition to have," said Dr. Jonathan Haft, a cardiac surgeon at the University of Michigan who operated on both Larkin brothers. "But the technology available, and the technology that is evolving in the field of heart failure is very exciting. ... The total artificial heart falls into that category."

Haft said both brothers were "very, very ill" when they were first introduced. Both brothers' hearts failed and went into cardiogenic shock.

"We wanted to get them heart transplants, but we didn't think we had enough time," he said. "There's just something about their unique anatomic situation where other technology wasn't going to work."

They were equipped with total artificial hearts in 2014. While Larkin went home wearing a gray backpack that held the battery for his artificial heart, his brother remained in the hospital for six weeks before receiving a human heart transplant.

Larkin did so well with the device that doctors told him he could live outside the hospital with it.

"I was shocked when the doctors started telling me that I could live without a heart in my body and that a machine was going to be my heart. Just think about it — a machine," Larkin said.

Larkin's machine was a Syncardia Total Artificial Heart. Two tubes exited Larkin's body from beneath the ribcage and connected the artificial heart to a 13-pound driver carried in a backpack. 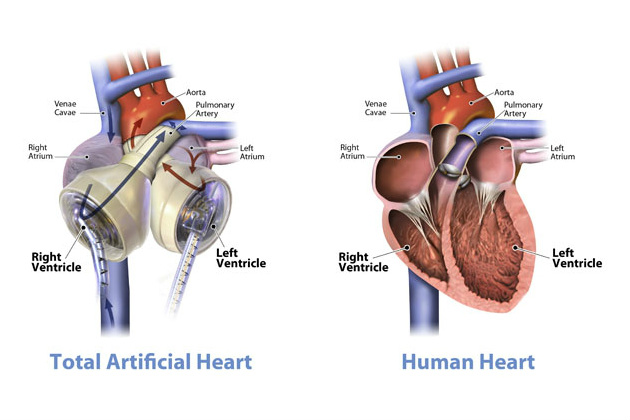 The driver powered the artificial heart and pumped compressed air into the "heart's" ventricles, which allowed blood to be pumped.

Larkin was able to continue many of the things he did before receiving the hearts. He played basketball, spent time with his children and went on rides in a car with friends.

Following the transplant, Larkin said he felt immediately like he could go jogging.

"I want to thank the donor who gave themselves for me," he said. "I'd like to meet their family one day. Hopefully they'd want to meet me."