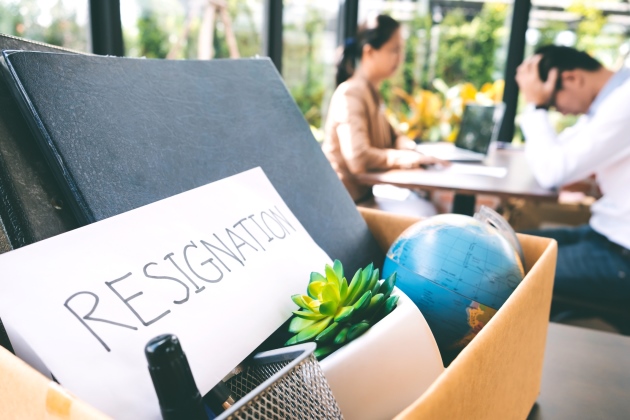 To many recruiters and hiring managers, job-hopping used to be viewed as a warning sign that the candidate was flaky and uncommitted, or a bad worker who would soon be fired. But now, that perception seems to be changing as a result of several factors.

In a good economy and at almost full employment, many companies say they’re struggling to find good workers and they’re turning to the best place to find them: industry competitors. This creates an ideal situation for employees with in-demand skills. On the flip side, there are also workers on the lower end of the pay spectrum who may be changing jobs in an effort to make ends meet.

In addition, it’s almost impossible to have any type of workplace discussion that doesn’t include the "M" word. Millennials have influenced changes in every area from recruiting to benefits to flexible work arrangements.

In light of these factors, job-hopping may be the new norm.

"According to the US Bureau of Labor Statistics, 4.2 years is the median amount of time that people spend with an employer," according to Robin Schooling, head of people at Strio Consulting|Rocket Power, and co-host of DriveThruHR. "Long gone are the days when employees hitched their wagon to a company and stayed in place until it was time for the gold watch and retirement party," Schooling says.

She admits that some hiring managers continue to view an employer with less than 10 years as a job-hopper. "However, the reality is there is value to be realized when someone has experience in different roles and settings," Schooling explains.

Even if candidates only have two years at every single job, she says it would not be wise to automatically discount them.

"They may still have done amazing things and added tremendous value; interview questions should focus on project completion, goal attainment, meeting of financial objectives, et cetera," Schooling says. And since businesses move at a fast clip, she says it’s quite possible to have major accomplishments in short time frames.

On the other end of the spectrum, it’s possible that staying put for too long might raise red flags. "Job-hopping to the same position, in the same market, to relatively the same size company is a red flag," according to Tim Sackett, president at HRU Technical Resources, and author of "The Talent Fix: A Leader’s Guide to Recruiting Great Talent."

"But I also have a ton of questions for the person who stays in the same position, in the same company, for years and years — both extremes could be problematic," he says.

On the other hand, if someone is moving systematically to positions within a market and they’re either advancing their career or moving to better companies, Sackett doesn’t necessarily view these frequent moves as a red flag.

"I’m not super concerned about job movement for the right reasons, and every person will have their own reasons," he says. "It comes down to whether I believe their story and strategy."

To Quint Studer, founder of healthcare consulting firm The Studer Group, and author of "Hardwiring Excellence," the age of the candidate may play a factor in his viewpoint.

“If I get a resume from somebody who is older and they've hopped every couple of years and now they’ve had six or seven jobs, I think I would question that,” he says.

However, if it’s a younger person who’s job-hopping, Studer says he wouldn’t question it as much. "When you're young, your main goal isn't the job you have, it's the skill set that job is providing you," Studer explains. "I tell younger people all the time that their early jobs are less about career and more about rounding out their skill sets so they can be valuable."

According to Allie Kelly, vice president of marketing at JazzHR, job-hoppers tend to have traits that companies would find invaluable. For example, they're adaptable and quick learners. "Constantly adjusting to new environments, they have great interpersonal skills and are quick to get up to speed with the rest of the team," Kelly says.

Job-hoppers also have diverse skill sets and experience. "Each organization has a different set of rules and standards, and because the employee has learned from various teams, they will bring a new perspective, offering insights on more efficient and innovative ways to get things done," she explains.

In addition, job-hoppers have extensive contacts. "Chances are, they have developed many relationships through their various job experiences, which can be a huge resource for your business and help land new employees, customers or clients." Kelly says.

And that’s why it’s important to understand the reason behind the candidate’s job-hopping.

"Involuntary reasons for job-hopping include layoffs, company reorganizations, and personal circumstances in the home," says Nichole Wesson, employee engagement consultant and branding coach. But if it’s voluntary, she says they may just be looking for better opportunities.

As such, Wesson believes that finding out the candidate’s personal goals and interests can help recruiters and hiring managers decide if the job opportunity is a good fit. "If what they want is more than the company can provide, expect the candidate to have a short tenure with the company," she explains.

And there’s one reason that Studer definitely views as a red flag. "If they just move to move, or move because they think they're underappreciated or underutilized, then I think they may have a victim mentality," he says.