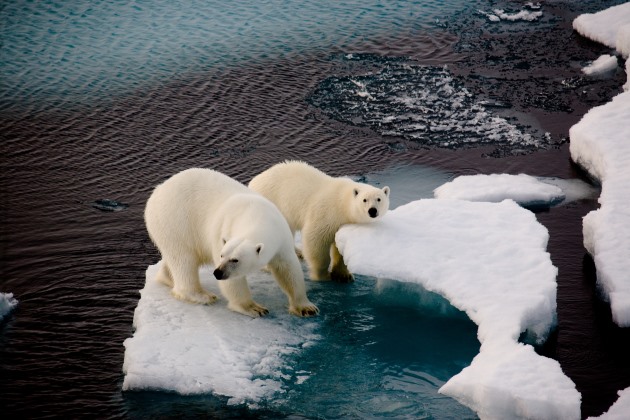 Every now and then, the specter of drowning polar bears haunts our news feeds, with tales of exacerbated climate precarity appearing alongside Arctic National Wildlife Refuge (ANWR) drilling plan controversies.

A seismic study of potential drilling land in Area 1002 was called off last winter because the required Environmental Impact Statement (EIS) was deemed incomplete. Less than one year later, the Bureau of Land Management has released a more thorough, pro-drilling EIS. The Department of Interior (DOI) has called for comments on a Fish and Wildlife Service (FWS)/U.S. Geological Survey co-authored scientific study, “Seismic survey design and impacts to maternal polar bear dens.”

Speculation exists that this publication move is political, solidifying the DOI’s role as an oil industry partner. Many have known this, but new more flagrant federal rule language reveals previously hidden commercial interests.

To stay ahead of the game, is DOI upending drilling opposition by encouraging oil and gas industry comments on this peer-reviewed Journal of Wildlife Management (December 2019) study?

The director of the Center for Science and Democracy and the Union of Concerned Scientists, Andrew Rosenberg, states: “What it looks like to me is they’re giving industry the opportunity to negate the study… You don't normally open up an avenue like this unless you’re waiting for special interest groups to jump in... This is a very directed way to undermine the science.”

Comments are open until mid-April 2020 on the future of this bear species listed as threatened.

The study describes seismic impacts on ANWR’s 1002 Area: “In the Arctic, winter seismic activity can consist of >50 vehicles, numerous sleds hauling the camp for workers, and air strips, and can progress 24 hours per day, with camps and supply trains moving approximately every 2-5 days (SAExploration 2018).”

Already facing climate change, polar bears are denning during the time and at the place prospective drilling will occur: “Because of the relatively high proportion of 87 polar bear maternal dens and denning habitat compared to elsewhere in northern Alaska, 77 % of 88 the 1002 Area has been designated as critical denning habitat...”

The study cites the Secretary of the Interior’s obligations to protect polar bears under the Marine Mammal Act (MMA) and Endangered Species Act (ESA). But, following the EIS, this is not enough to call the seismic survey (or drilling) off.

Drilling will commence because of federal agencies “pandering to industry greed.” That’s the phrase the Gwich’in Steering Committee used when responding to the “sloppy” EIS findings.

Currently, the Gwich’in Steering Committee, along with the Alaska Wilderness League, Defenders of Wildlife, and The Wilderness Society, is using the Freedom of Information Act (FOIA) to receive pertinent EIS and seismic-related documents. The speed of document releases hold up proceedings but are presumably moving forward as part of Gwich’in Steering Committee et al. vs. U.S. Department of Interior negotiations.

With the EIS approving drilling, the seismic study covers: “...five hypothetical seismic survey designs...relative to the likely timing and distribution of polar bear dens… ranging from no spatial or temporal restrictions on activities to explicit consideration of when and where operations can occur. We then determined how many maternal polar bear dens would likely be disturbed under each scenario with and without a FLIR [forward looking infrared] survey prior to the initiation of seismic activity.”

State the authors: “The CMP also lists as one of its fundamental goals a desire to achieve polar bear conservation while reducing restrictions to economic development. Thus, there is a clear need to find the best ways for seismic surveys to occur while also reducing negative impacts to polar bears.”

How are these “negative impacts” defined in a regulatory climate valuing economics over indigenous survival, climate change ecology, or ethical biodiversity?

The onward march of unrestricted economic growth continues, leaving a trail of polar bear bones behind it. Meanwhile, climate change is noted for having major impacts on polar bears in another recent study on sea ice loss and habitat destruction.