How will Puerto Rico fix its energy grid? 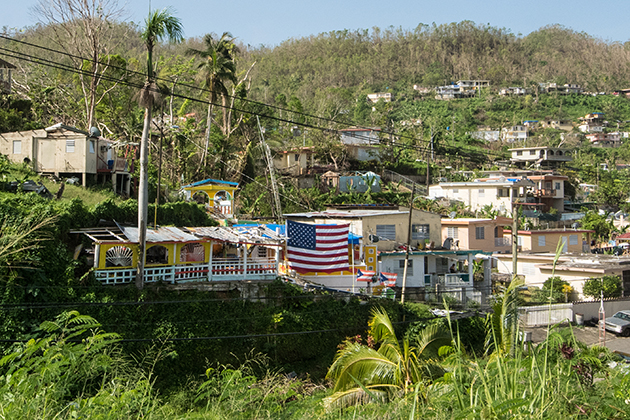 Puerto Rico's energy grid is said to be functioning at 44 percent.

Puerto Rico's death toll from Hurricane Maria remains hotly contested. The official government number stands at 55, but officials have acknowledged that 472 more people died in September 2017 than the previous year.

These deaths are linked to the ongoing problem of a downed power grid, which is said to be functioning at 44 percent. However, it is also estimated that anywhere between half and three-quarters of the island's people still do not have power.

Nearly two months after the storm, the overall question here remains, "What is to be done with Puerto Rico's power grid?" While the topic is a political hot potato — as two contracts in the hundreds of millions were approved and then contested or canceled — political machinations are just one element of the bigger issue.

Right now, Puerto Rico stands at a crossroads. On Nov. 8, Ricardo Ramos, executive director of the Puerto Rico Electric Power Authority (PREPA), unveiled a vague transformation plan to improve services. Paradoxically, around 24 hours after his news conference, a failed transmission line created a blackout in San Juan and other cities. It appears it has been "one step forward and two steps backward" when it comes to Puerto Rico's energy recovery.

While renewable energy remains more affordable, Puerto Rico has resisted moving in this direction in the past. The utility has avoided complying with a 2010 renewable energy law stating the island needs to get 12 percent of its electricity from renewable sources. As of 2015, renewables were at 3 percent.

Let's take a closer look at these options.

Microgrids are combinations of solar panels, generators and battery storage — much like the one Tesla built for San Juan's Children's Hospital.

Of course, as there are no guaranteed ways to generate electricity that covers all disaster preparedness needs, microgrids have limitations. They can be installed and maintained in difficult-to-reach places, but main grids provide a higher power quality.

Some entity would also have to finance microgrid projects, because local communities will not be able to afford to do so.

The renewable battery company, Sonnen, has introduced its concept in Australia, Germany and Arizona. Now it wants to build hundreds of microgrids across Puerto Rico.

Demand here is high: "Prior to the hurricane, the company had installed only around 20 systems on the island. Post-hurricane, orders have increased 1,000 percent, and the company is currently shipping roughly 30 new systems a week."

The big advantage here is that new infrastructure is unnecessary, which could work for Puerto Rico's remote communities.

Puerto Rico's current power plant grid is ineffective. Currently, plants are mainly located in the south, while the most residents live in the north. This has historically required large-scale above-ground transmission lines.

The largest power plants are in Salinas, Guayanilla and other towns near the southern coast. In the past, this has been an attractive option because southern land is cheaper, and a major oil refinery once refined about 23,500 barrels of oil daily there.

But 80 percent of Puerto Rico's power lines were felled during Hurricane Maria. To deal with limits of above-ground power line transmission, more widely distributed plants and even the possibility of underground cables are possible.

However, underground cables, or subterranean lines, are cumbersome. They take more time and money to build and are difficult to assess for damages. Underground cables also cost 10 times the amount of above-ground poles and lines. While this may seem like a more practical option, the question remains: "Who will pay?"

The one bright light at the end of the recovery tunnel is that renewable energy is squarely on the table. Government agencies are only required to restore utility services to "predisaster conditions," but allowing private companies like Tesla and Sonnen to use the island as a lab is tricky business.

Only time will tell as more people explore mixed planning and public-private collaborations that fulfill the island's current dire need for improvements.