How to avoid analysis paralysis 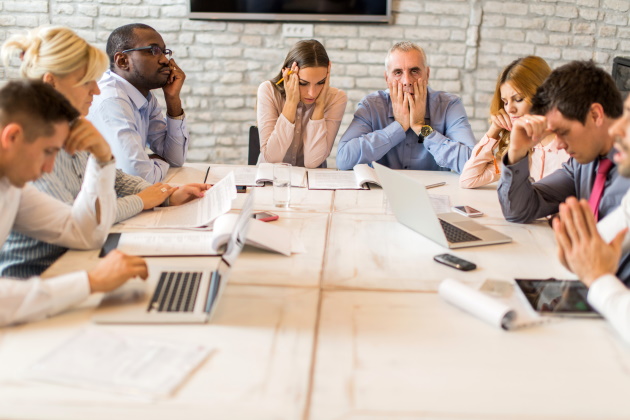 Have you sat in a meeting knowing a decision had to be made while you watched the clock tick? So many ideas and objections are presented that the likelihood of reaching consensus dwindles.

The situation is described as “analysis paralysis.”

The phrase describes individuals or groups that overanalyze and overthink a situation. Decision-making becomes "paralyzed," with individuals unable to reach consensus or recommend a course of action.

The syndrome causes frustration, failure to complete a task, misunderstanding, wasted time and resignation. Overanalyzing can derail the most well-intentioned group.

By recognizing the symptoms, corrective actions can avoid paralysis.

Individuals, or the group, might overthink the assignment. Frequently, they want to solve the entire problem and decide how it will be managed, who will do the work, and deadlines. They should focus on the recommendation and not on the “how to” to carry out the decision. Recommendations usually go to a committee or staff for the implementation process.

Watch out for deep dives. For instance, an assignment to make a recommendation about the conference ends in a discussion of the name badges. It seems easier to address low-level issues than to be brave enough to offer solutions.

Group discussion and decision-making can be daunting for individuals. They may lack experience working in a group, or the courage to state an opinion or make a recommendation.

Encourage everybody to join in the conversation. Sometimes the loudest person is not always the most valuable voice in the room. Be wary of those who speak twice as much as they listen. Respect people and ideas.

Decision-making is avoided by offering a glut of ideas. At some point the ideas must end and closure reached.

Also, listen for the devil’s advocate with a pattern of disagreeing. Hear them out or call them out. Recommendations are meant to offer solutions, not to expand the problem.

Be alert to time wasters. As the clock ticks, the opportunity for consensus diminishes.

Finally, the culture of an organization may be seen as rejection rather than acceptance. If a board of directors is known to reject or micromanage recommendations, the group isn’t likely to work as hard on solutions.

Finding yourself in these situations, the outcomes are predictable.

The decision is rushed with groupthink taking over — people agreeing because it looks like others agree. Anxiety drives the meeting with people watching the time elapse.

Equally bad is the group that simply missed the mark. They will state, “We didn’t have enough time,” or “we had a great conversation but didn’t really reach a conclusion.”

You want a group leader who can avoid a “hung jury.” It is disappointing when the group says, “Among all of us we could not reach agreement.”

Agree upon guidelines to avoid paralysis.

Set the tone. Restate the assignment at the start. Quite often the precise charge was uncertain, or participants don’t give it much thought. It is critical to understand the task.

Appoint a facilitator. Decisions eventually must be communicated. A designated spokesperson will monitor time and engage everybody with statements like, “have we heard from everyone?” and “have we reached agreement yet?”

Keep notes. Ask someone to be a scribe. The only way to ensure the group agrees is to accurately read the final recommendation. If the notetaker is not accurate, almost immediately the group fails and their report becomes, “we also talked about but didn’t write it down.” As is often said, an idea without writing it down is just a dream.

Rely on facts. Without data, any decision might sound good. Ask for clarification and metrics. For example, “How did the program perform in the past? What is the potential for growth?”

Respect time. Know how much time is allocated for the process. If the group is assigned three tasks in one hour, they should allocate about 15 minutes per task and the final minutes for recap. Most groups work under the stress of time, but if a 5-minute break is needed to stretch and refocus, take the break.

Be brief. To ensure the recommendations are understood, keep them brief. Listeners and readers prefer bullets and examples, rather than verbose paragraphs.

It is rare to find a person who enjoys meeting “just to meet.” Stay laser-focused on the task, deadline, and expectation. Avoid the temptation to overanalyze so that paralysis doesn’t take over.